A new report by the Mineta Transportation Institute (MTI) at San José State University explores the consequences if California’s Proposition 6 is passed in November. The proposition would repeal California’s landmark Senate Bill 1 (SB1) — the Road Repair and Accountability Act of 2017.

The study projects that, between now and 2040, California will lose approximately $100 billion in transportation revenue if voters repeal SB1 (see Figure). As an example, in 2040, the mean projection is that the state will collect $8.6 billion with SB1 and $3.4 billion without, a $5.2 billion difference. This has significant consequences for the state’s ability to maintain roads, bridges, and address other transportation improvements.

“California’s ability to plan and deliver an excellent transportation system depends upon the state having a stable, predictable, and adequate revenue stream,” says Martin Wachs, lead author for the report. “Californians have an important decision to make on November 6. A decades-long transportation funding crisis left California’s roads badly in need of costly repair and replacement. Without SB1, where will those funds come from?” 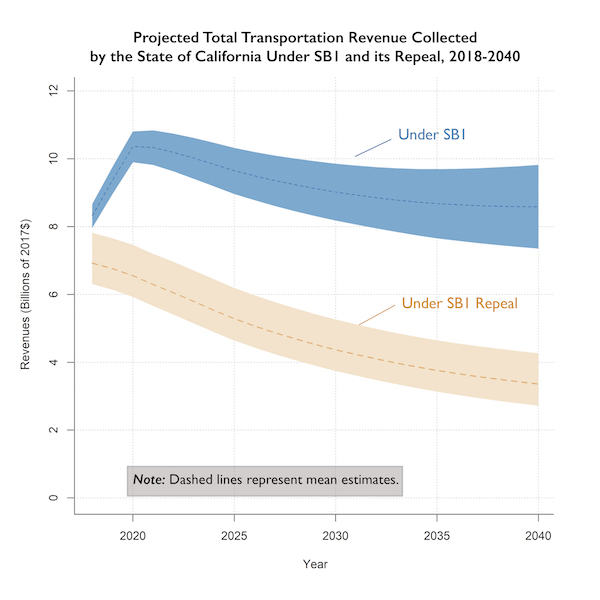 The report’s authors — Wachs, Hannah King, and Asha Weinstein Agrawal — project the amount of transportation revenue that the state’s own taxes will raise through 2040 to support transportation services and infrastructure under two scenarios:

In addition to projecting total revenues that California will collect under both scenarios, the authors project the cost to Californians who drive by estimating revenue paid per registered vehicle. With SB1 in place, the average revenue collected per vehicle will increase from $265 in 2018 to a maximum of $310 in 2020, and then fall to $190 per vehicle by 2040. Should SB1 be repealed, mean projected revenue per vehicle will drop every year, falling to about $74 in 2040.

“Whether SB1 is repealed or retained by voters in November 2018, transportation revenue will decrease over time due to inflation and, most importantly, because of dramatic increases in fuel efficiency and the widespread adoption of zero emission vehicles,” notes King. “Of clear importance to the public is assurance that the revenue is being spent efficiently and on things that they care about such as maintenance, safety improvement, and programs that benefit the environment.”

The full report, including data files for the projections, can be downloaded here.