“Everywhere in the country, electric buses are better for climate than their diesel and natural gas counterparts,” said Dr. Jimmy O’Dea, senior vehicles analyst at UCS and study author. “In cities that get their electricity from power grids with the highest amounts of clean energy, electric buses are even cleaner than the typical car on the road today,” he said.

Electric buses are the cleanest in places like the Pacific Northwest that depend on hydropower, California with its large amounts of wind and solar power, the Carolina and Mid-Atlantic states that have relatively high levels of low-carbon nuclear power, and New York and New England that have a combination of these energy sources. These places also use less coal to generate their electricity. A typical diesel bus would have to attain 37.3 miles per gallon in upstate New York, 21.2 miles per gallon in California or 19.8 miles per gallon in New England to have the same lifecycle emissions as an electric bus. 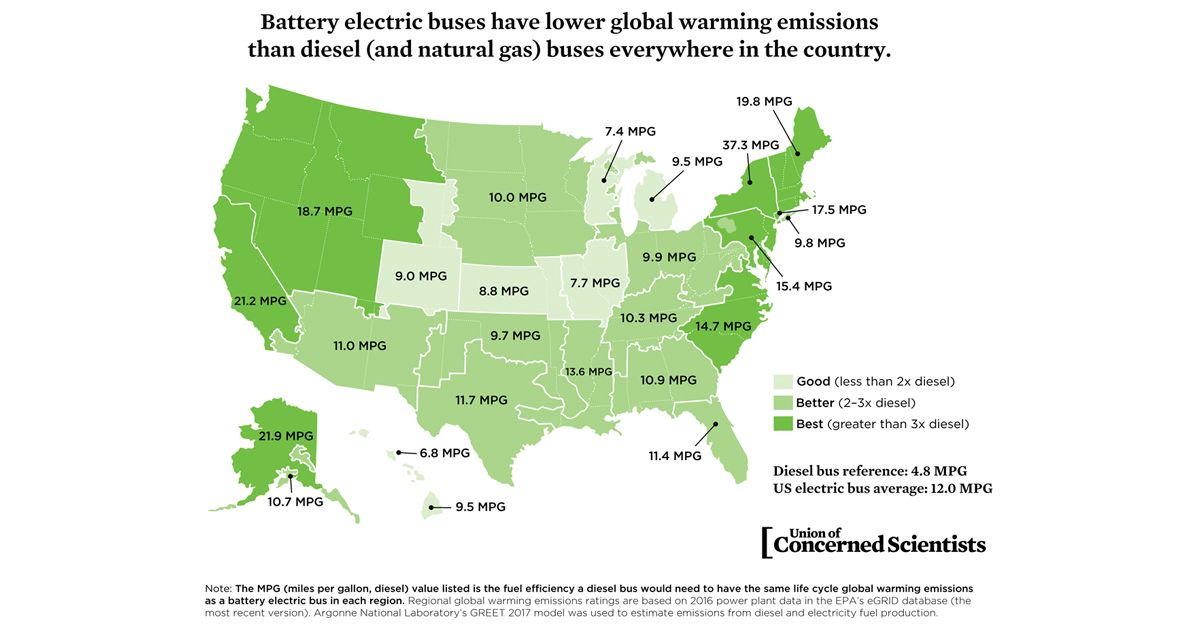 “In regions that use a lot of renewable energy, transitioning to electric buses should be a no-brainer,” said O’Dea. “But even in places like Cleveland or Minneapolis that still rely on coal, electric buses have the advantage of getting cleaner as the power grid gets cleaner, and transit agencies have the option to power their buses with renewable electricity.” Nationwide, more than 85 transit agencies have begun electrifying buses. Los Angeles Metro committed last year to fully electrifying its transit fleet by 2030 and Seattle’s King County Metro committed to an all-electric fleet by 2040.

In terms of carbon emissions that cause and worsen climate change, putting one new electric bus on an average U.S. road is equivalent to taking 2.5 diesel-powered buses off the road.

Heavy-duty vehicles, including buses, make up only 5% of all vehicles on the road today but contribute 25% of global warming emissions in the transportation sector and a significant amount of air pollution. Most of the country’s carbon dioxide emissions that cause climate change come from transportation.

“Every time a big or small city commits to electric buses they increase the market demand, pave the way for more transit agencies to purchase electric, and get us closer to electrifying all heavy-duty vehicles,” said O’Dea. Buses share similarities with other types of heavy-duty vehicles like delivery trucks, garbage trucks and school buses. They are comparable in size, maneuver through urban traffic and over varied topography, make scheduled stops, have designated service areas and are parked overnight.

“It makes sense for all cities to electrify their transit fleets, cut toxic pollution along bus routes, and help the planet avoid the worst impacts of climate change,” said O’Dea. “Electric transit buses are a climate solution that cities and transit agencies can start implementing today.”