Close
Autonomous vehicles (AVs) will increase, not decrease, traffic in already overcrowded downtown areas. That is one of the main findings of a joint World Economic Forum and Boston Consulting Group (BCG) study with the City of Boston, released today.

While AVs will reduce the numbers of cars and overall travel times across cities as a whole, the effect is not evenly distributed, with concentrated downtown areas potentially seeing a deterioration in traffic flow. City and state governments can intervene to encourage higher sharing of AVs and avoid a significant move away from mass transit systems, which remain essential for urban mobility. 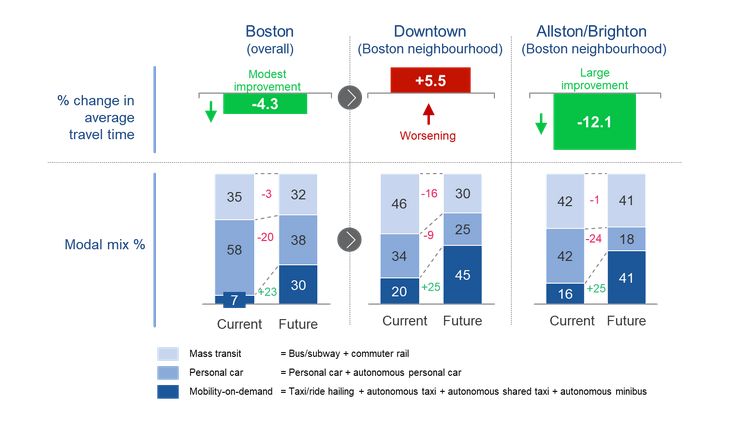 “Cities can’t follow a ‘wait and see’ approach towards autonomous vehicles,” said John Moavenzadeh, member of the Executive Committee of the World Economic Forum and co-author of the study. “Cities need to actively explore policies and incentives, such as dynamic pricing, dedicated lanes and redesign of the kerb to ensure that autonomous vehicles will achieve the full value for society that they promise. If such choices are not made, cities risk losing more than they will gain from autonomous vehicles.”

A sophisticated traffic simulation model for the City of Boston showed that both the number of vehicles on the road and travel times would change markedly. While neighbourhoods outside the downtown core, such as Allston, would see a reduction in traffic and decreased travel time, travellers downtown would face increased traffic and travel time. The study also indicated that a shift to autonomous mobility would reduce by 48% the number of parking spaces required in Boston, which unlocks tremendous opportunities to rethink streets and overall urban design.

The team conducted a large-scale conjoint analysis asking thousands of residents in the Boston area what types of autonomous and non-autonomous vehicles they were likely to drive in certain situations (e.g., travelling to work when raining, etc.). The analysis predicts a clear shift to mobility-on-demand (both AVs like robo-shuttles and non-AVs like today’s taxi and ride-share services), which will account for 30% of all trips in the greater Boston area (up from 7% today) and 40% of trips within the city limits in the future. The results of this consumer study were used as the input assumptions for a traffic simulation model.

“Autonomous mobility on demand provides a very convenient door-to-door service with a guaranteed seat and convenient mobile booking – all this at very competitive prices,” said Nikolaus Lang, Senior Partner at BCG and co-author of the study. “For trips shorter than four miles, it is likely that travellers would opt for low-capacity autonomous taxis or shuttles rather than taking high-capacity mass transit options like buses or trains.” This, in turn, would increase the number of cars on the road and average travel time by 5.5% in Boston’s downtown neighbourhood.

Policy-makers must expect the impact of AVs to vary not only city by city but also neighbourhood by neighbourhood, the study concluded. Policies and incentives will be needed to foster the technology’s innovation while ensuring that its benefits far outweigh its challenges. Potential measures to improve citywide travel time include: 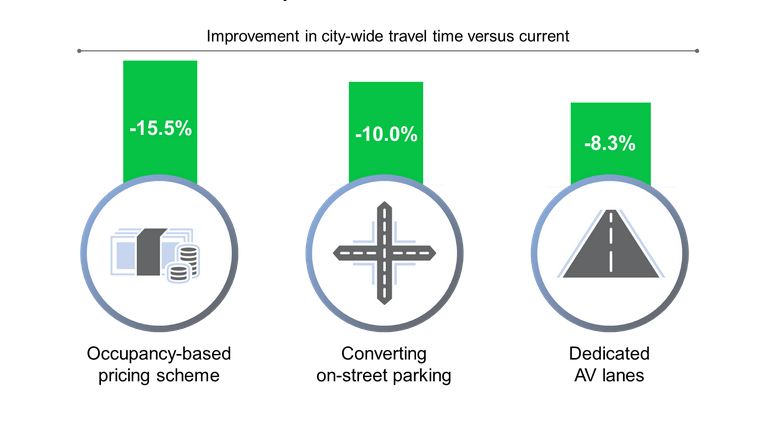 The report, Reshaping Urban Mobility with Autonomous Vehicles: Lessons from the City of Boston, details the findings from collaboration with BCG in partnership with the City of Boston and the project’s community of working group members.