Close
This article was originally published on The City Fix.

To curb car congestion and boost the economy, China is embracing trains at an unprecedented rate. In June 2017, the government approved 5,770 kilometers (3,585 miles) of new urban rail systems, almost 17 times the total amount of track in all of Brazil. Existing systems are expanding and new systems are sprouting up. Last year, the number of cities with urban rail transit systems soared to 53, with many small and medium-sized cities coming aboard.

But like many city transit systems, farebox revenue isn’t enough to keep China’s new rail systems afloat financially. Rail transit systems in China have historically been financed primarily by municipal governments, through local land sale revenues and municipal borrowing. With the cooldown of housing and land markets and increasing municipal debt, however, many cities are looking to public-private partnerships.

The results have not always been positive, as cities grapple with inexperienced state-owned companies and inadequate risk management overrides prudent accounting. 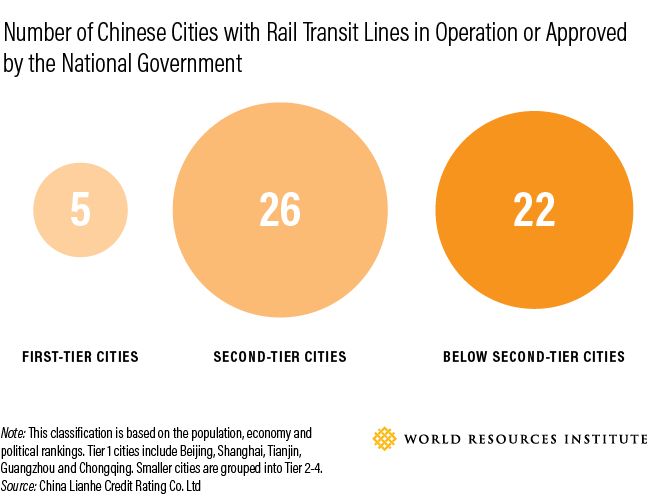 These projects are spread over 40 Chinese cities, from large cities with more than 20 million people to small cities with just 170,000. They include 40 metro projects and 10 streetcar projects. Most use a form of project financing where the private sector is responsible for finance, design, construction and operation of the infrastructure for a certain number of years, known as “Built-Operate-Transfer.”

Despite their rapid adoption, the municipal debts created by the public-private partnership arrangements pose a great risk for China’s economy, amounting to around $2.5 trillion by November 2017. To avoid economic crisis, in March 2018, the National Development and Reform Commission put a hold on rail transit projects in 13 Chinese cities, including at least 4 ongoing private-public partnership projects.

The Commission raised the bar for cities qualified for rail transit projects, where annual fiscal revenue and GDP increased threefold (from $ 1.6 billion to $ 4.8 billion and $159 billion to $476 billion, respectively). The Ministry of Finance also flagged the need for intense scrutiny of these projects, and 12 unqualified public-private partnership projects were removed from the national database and forced to seek other financing channels or renegotiate for less risky contractual arrangements.

1. Misguided Purposes
When cities create their annual budgets, they usually set an upper spending limit, which controls fiscal risk and liability. However, public-private partnerships open a loophole in this constraint by allowing cities to commit more spending than they can afford by including commitments to the private sector. Some projects are therefore pursued not for efficiency reasons, but to get around the hard budget constraints and boost investment-led growth, regardless of local fiscal capacity.

This gives rise to economically inviable projects, with an excess in transit capacity for the residents in the area. For example, some remote counties of Yunnan Province, with fewer than 200,000 residents, have a tremendous oversupply of transit services thanks to streetcar projects.

The fiscal implication of this behavior is alarming. In the short run, a $2.9 billion investment to construct a metro line will strain a city with $1.2 billion annual revenue. In the long run, low ridership and scarce farebox revenues will further deteriorate the financial performances of both the local government and private companies. In the end, such an arrangement not only increases local liability, especially in the event of a default leaving debt obligations to future governments, but can also crowd out essential safety-net programs and growth opportunities. 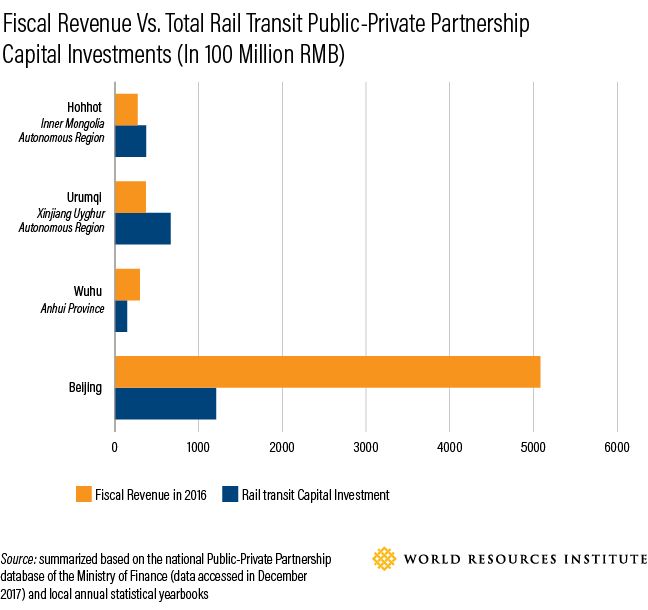 2. Lack of Private Sector Participation
Another feature of current rail transit public-private partnerships is that they are predominated by state-owned construction enterprises with limited experience in the lifecycle management of rail transit projects. This inexperience will possibly lead to increased project costs, delays in delivery, substandard service quality, or even financial insolvency. Further, the indifference of these state-owned enterprises to profitability, risks and innovation also undermines projects’ Value for Money.

3. Inadequate Risk Management
Since the initiation of public-private partnership projects is largely reliant on political support, the rush to deliver these projects within a certain political cycle to boost economic growth and leave a political mark can lead to overlooking risk profiles and, ultimately, inadequate risk management.

In some cities, the shortage of active “private” participants has prompted governments to undertake excessive risks and liabilities in pursuit of this quest – through government-backed debt financing and guaranteed fixed rate of returns, for example.

In Wuhan, a consortium of commercial banks was chosen as the company to finance, build and operate Metro Line 8. Although cost overrun or other project risks were high, due to the inexperienced bank consortium forayed into metro construction and operation, the local government still accepted its strict demand for fixed returns. In other cities, poorly understood demand risks are blindly shouldered by state-owned companies, increasing the likelihood of project defaults.

Although public-private partnerships can help cities expand their infrastructure to keep pace with demand, many Chinese cities are beginning to understand that they have profound implications. Other financing channels such as land value capture and green finance (like green bond or carbon trade) can well complement public-sector financing or public-private partnerships.

Rail transit systems not only offer investment-led growth and political ribbon-cutting glory, but can come with heavy financial burdens, if poorly planned or executed.  The demand – and need – for more public transit infrastructure is undeniable, but expensive rail transit systems are not the only way. More economically feasible options, such as bus rapid transit systems or shared mobility, are also viable to meet increasing urban transport challenges.

Lulu Xue is a Research Associate at WRI China.