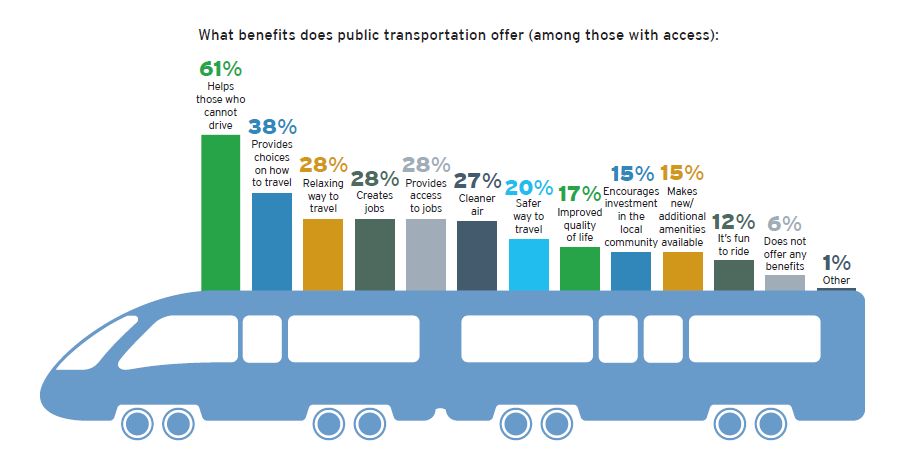 Americans identified an array of benefits provided by public transportation. Helping those who cannot drive was the benefit cited by more respondents (61 percent) than any other. Among others mentioned were providing travel choice (38 percent), offering a relaxing way to travel (28 percent), creating jobs (28 percent), access to jobs (28 percent) and contributing to cleaner air (27 percent).

The survey’s respondents also said the most prevalent forms of public transportation currently available to them are buses/street cars (78 percent), followed by taxis and related services (64 percent), and railroads/subways (34 percent).

“With the expanded use of ride-sharing — ranging from traditional car and van pooling to newer technology-based services such as ride-hailing — with smart phone apps and autonomous vehicle options in our not-too-distant future, people increasingly can have a lower-stress, modestly priced way to connect home to station. This is truly a game-changer for public transportation and more Americans who are considering using transit,” said Diana Mendes, AICP, HNTB senior vice president and national transit/rail practice leader.

Respondents also were asked how they would divide available funding among local transit system components of transit vehicles, safety systems and controls, parking facilities, track infrastructure, and station or stop facilities. They are most interested in seeing available dollars spent on transit vehicles (29 percent) and safety systems (21 percent). Parking facilities were cited by 18 percent of respondents, while track infrastructure was cited by 17 percent, and stations or stop facilities at 15 percent.

Why people use public transportation
While respondents identified many reasons for using public transportation, saving money was the most commonly identified reason by 33 percent of respondents. Avoiding traffic/congestion was cited by 24 percent; convenience, by 23 percent; and the ability to relax and/or be productive on the ride, by 21 percent of Americans surveyed.

When respondents also were asked to identify the one aspect they liked most about public transportation, cost was cited most frequently at 21 percent. Convenience was named by 17 percent of Americans, and being a passenger by 15 percent. Ease of use (11 percent) and availability (11 percent) were among those cited next.