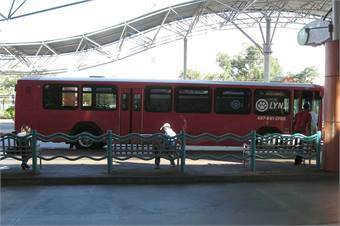 The technology is presently available only for the two LYMMO lines — Orange and Grapefruit. On 22 message boards throughout the two routes passengers will now see estimated bus arrival times.

The latest customer amenity also is accessible on desktop computers and mobile devices. Here passengers select their route, direction and stop and be able to then see the estimated arrival time of the next bus. Passengers likewise have an option to view specific bus locations on a map.

If a bus is delayed due to an unusual event, such as a reroute, incident or equipment problem, the arrival predictions may remain the same or even increase for that bus. In the event that a bus stops transmitting data to LYNX servers, it will not appear on the website, even though it is in service.

Ultimately, LYNX would like to push real-time arrival information at stops throughout its entire system.