Sun Metro Brio will introduce El Pasoans to a high-quality transit service that offers similar benefits to light rail transit, such as improved speed and reliability, but at a much lower implementation cost.

Construction along the Mesa Street corridor — the first of four corridors — began in June 2013 and is ongoing. The construction consists of the installment of 22 Brio stations from the Downtown Transfer Center to the Westside Transfer Center.

The Glory Road inbound (southbound) station became the first completed station for the Brio RTS Mesa corridor. The total project cost for the Brio Mesa corridor is $27.1 million, of which $13.5 million is funded by the Federal Transit Administration.

The Sun Metro Brio will use modern, rubber-tire, high capacity New Flyer articulated vehicles. The vehicles will have a frequency of 10 minutes during peak service and 15 minutes during off-peak Monday through Friday, a 20-minute frequency on Saturday and no service on Sunday.

A ticket vending machine will be installed prior to the start of the Brio service in late summer/early fall to allow for an improved and faster fare collection system. 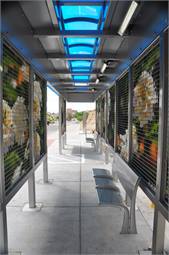 The majority of the stations, which will be placed about a mile apart, will also feature public artwork that is collectively known as "Leaves of Air," created by Boston-based Artist Catherine Widgery. The elusive artwork, which is set in the perforated shade screens, are images of local flora that can only be perceived as people move past the Brio station.