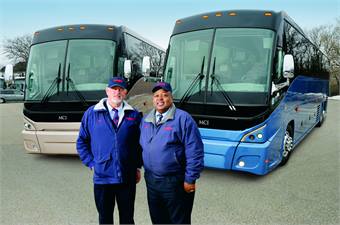 Features on both models include passenger seat belts, Wi-Fi, and 110-volt outlets for passenger electronics. All of the models share a number of standard safety features, including electronic stability control. Additionally, Arrow installs GPS on all of its MCI coaches. The coaches are powered by engines that meet the latest EPA standards for drastically reduced emissions.

Founded by the Busskohl family in 1928, Arrow is one of the largest privately held charter companies in the U.S., ranked the 9th-largest motorcoach company in North America by METRO Magazine.

Meanwhile, Cyr, Maine’s Cyr Bus is entering its second century of service with the delivery of a new Setra Top Class S 417.