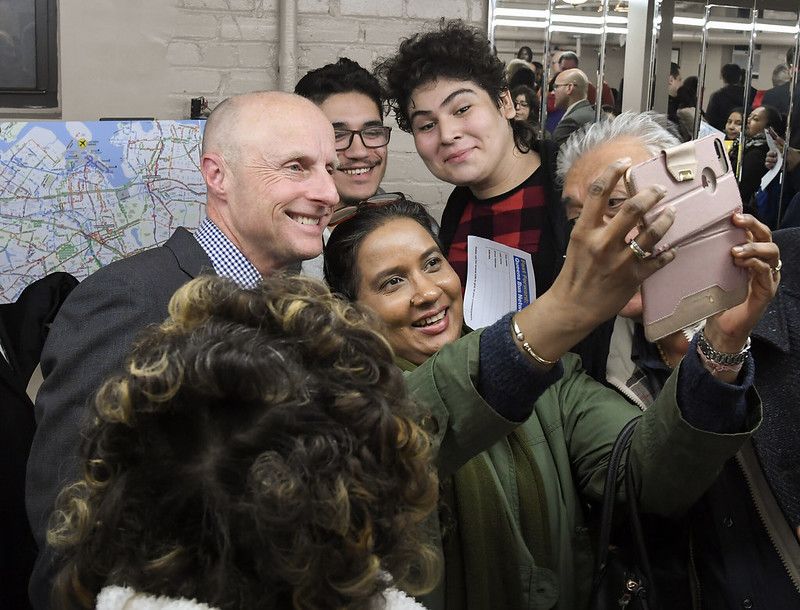 Andy Byford, (shown meeting with customers at an outreach event in Queens, N.Y.) was appointed president of NYCT, the largest transit agency in North America, in January 2018. Marc A. Hermann/MTA NYCT

“Andy Byford will be departing New York City Transit after a successful two years of service and we thank him for his work," MTA Chairman/CEO Patrick J. Foye, said in a statement. "Andy was instrumental in moving the system forward, enacting the successful Subway Action Plan and securing record capital funding with the Governor and the Legislature, and we wish him well in his next chapter.”

NYC Mayor Bill de Blasio took to Twitter to express his thoughts, "This is a real loss for New York City's subway and bus riders. The MTA needs people like Andy Byford — now more than ever."

Byford also submitted his resignation to the MTA in October, citing frustration with interference from New York Governor Andrew Cuomo, Politico reported. The MTA's leadership convinved him to rescind that resignation, in part by promising to let him retain control over subway resignaling, which Byford considered key to turning around the subway system over the long term, the report said.

Byford was appointed president of NYCT, the largest transit agency in North America, in January 2018.

Prior to joining NYCT, Byford was CEO of the Toronto Transit Commission, where he led the third largest transit agency in North America, Canada’s largest transit agency, carrying over 540 million riders per year on bus, streetcar, light rail, subway and paratransit services. Additionally, he was COO of Sydney’s Rail Corp., where he delivered service to a million customers a day on Australia’s largest transit network. He also held positions with UK-based Southern Railway and South Eastern Trains Ltd., and the London Underground.

“I’m very proud of what we have achieved as a team over the past two years and I believe New York City Transit is well-placed to continue its forward progress now that the MTA has a record breaking $51.5 billion Capital Program in place," Byford said in a statement. "I’m very grateful to Governor Cuomo, Chairman Foye and members of the Board for giving me the opportunity to serve New York and to head up North America’s largest transit system.”