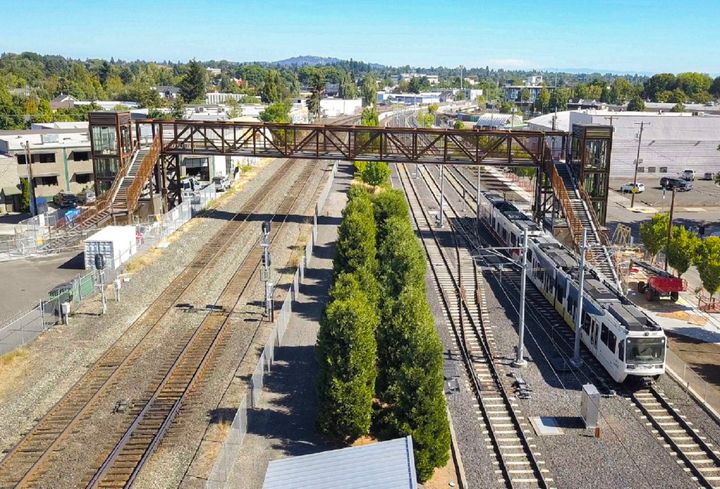 As bicyclists zip down Southeast Gideon Street, a few MAX passengers exit their train at the SE Clinton/SE 12th Ave Station. For those who regularly walk in the area, use the busy bike boulevard or take the MAX Orange Line, they’ve had a front-row seat to see TriMet’s newest safety project take shape over the past year — a new pedestrian and bike bridge spanning the heavy rail and MAX tracks.

Construction of the bridge is now nearly completed. The final touches will be in place in October, with the bridge expected to open to the public in mid-November. Once opened, the bridge will be the final piece of the Portland-Milwaukie Light Rail Transit Project and will create another north-south connection over MAX and Union Pacific Railroad tracks, where stopped heavy rail traffic can create a barrier that cannot be crossed safely.

The $15 million project was deferred during the development of the Portland-Milwaukie Light Rail Project in 2010. But with the strong support of the City of Portland, federal partners, and community members, TriMet successfully secured approval from the FTA to construct the bridge using some of the remaining funds from the MAX project.