Close
Disruption is nothing new in the transportation sector. Historically, transportation innovation has been a catalyst for broader societal shifts that dramatically change how people live and work. Today, we are on the verge of the biggest transportation disruption in history, which is being driven by business model innovation. Mobility as a Service (MaaS) is the term often used to describe this trend. The MaaS model is largely driven by the sharing economy, which has already disrupted other industries such as music, television, hospitality — and now transportation.

Many autonomous vehicle (AV) prognosticators have focused their attention on how driverless technologies will impact the choices of consumers, from car ownership to vehicle design. Less has been written, however, about how AVs will impact public transit.

Agencies need to lead a broader conversation — not just within the industry — about their futures. Due to the planning horizon that they work within and the pressing needs of daily operations, it’s important to start that conversation now while staying grounded in what will realistically change over the next few decades.

Preparing for an autonomous future
Changes in how people choose to commute are all but guaranteed, but how much change and whether it will be directly impacted by AVs is still an open question.

There are theories that the arrival of AVs will echo the e-scooter “Armageddon” that flooded sidewalks and streets in cities across the country over the last few years. In 2018, the National Association of City Transportation Officials said more than 38.5 million trips were taken on 85,000 scooters in 100 different cities in the U.S. That’s a lot of disruption in a short period of time (the first Bird scooter landed in Santa Monica in Sept. 2017).

There are interesting parallels between [e-scooters] and how autonomous vehicles might come to market.

E-scooters may not represent an existential threat to public transportation and could prove to be a “last mile” solution for transit, but there are interesting parallels between them and how AVs might come to market. For example, venture-backed firms were able to dump massive numbers of e-scooters onto select U.S. cities seemingly overnight. In the same way, it’s conceivable that well-capitalized startups could deploy an entire fleet of AVs for hire in a city in a very short period of time, dramatically altering the mobility landscape. This scenario doesn’t feel far-fetched given Silicon Valley’s appetite for risk and willingness to burn cash if there’s an opportunity for reward.

Several local cities, with support from transit, have already started looking for ways to limit traffic, and one of the factors in their decisions is the potential increase in AVs. The Los Angeles County Metropolitan Transportation Authority, for example, plans to explore a congestion-pricing model to reduce inner city traffic while generating funds for public transportation. (This pricing system has already found success in London and will be introduced in New York City within the next two years.)

RELATED: What London can teach the US about curbing congestion

Embracing the opportunity of AVs
On the other end of the spectrum from those who are preparing for AVs in a more reactive way, some cities are actively embracing the technology and building it into their long-term plans.

One of the agencies at the forefront of this movement is the Jacksonville Transportation Authority (JTA), which is aggressively pursuing driverless shuttles and buses to replace its fixed guideway system. The agency hopes to bring public transit service to more people using this model.

An automated system, such as the one proposed by JTA, could facilitate flexible routes, address first-mile/last-mile service issues that have plagued transit agencies for decades, and provide more transportation options for the elderly and disabled throughout the region.

Anticipating regulatory uncertainty
Like Uber and e-scooters, AVs have and will continue to invite regulatory scrutiny. This is inevitable with disruptive technologies. Nearly every constituency of city governments will have an opinion on the matter, from citizen groups concerned about safety to road bikers and cab drivers. This means transit agencies will have to make plans with a high degree of uncertainty about how regulators will react.

Since the adoption of AVs has moved closer to reality, there has been no shortage of legislative efforts by states to address the issue. According to the National Conference of State Legislatures, 29 states have enacted legislation related to AVs since 2018. As the technology matures, so will the laws.

This year, members of Congress called on stakeholders in the self-driving car industry to help draft a bill aimed at expediting the adoption of AVs. A prior version of this bill was shot down last year over a lack of safety protections.

As we inch closer to the self-driving era, the need to regulate AVs will only intensify.

As we inch closer to the self-driving era, the need to regulate AVs will only intensify. As is the case with many new technologies, AV legislation is currently fragmented across states and the federal government. Ultimately, Congress should provide a strong, national framework for the industry. Until that happens, public transportation agencies will have to read the proverbial tea leaves to anticipate the most likely regulatory regime.

A framework for thinking ahead
Transit agencies have an opportunity — and obligation — to factor AVs into their short and long-term plans. To succeed, it’s important to create a framework for success.

1.    Establish foresight
Anticipating what could happen is a pragmatic approach to preparing for the unknown, providing agencies with the ability to adapt as external forces reshape the industry.

Look for signals. Agencies seeking success in an AV world should foster a conversation about plausible futures informed by proper data analytics, and then begin surveying the industry for potential opportunities. Figure 1 illustrates the various stages that can be realistically anticipated as companies look for signals that change is coming. Utilizing data to spot trends offers organizations the ability to create entirely new markets on their terms. Predictive mobility will become a valuable tool for agencies across the U.S., especially those who utilize AV technology to the fullest. Data will become currency as firms measure and predict mobility demand, explore behavioral regularities, quantify service reliabilities and ultimately tailor personalized predictive services on a large scale. 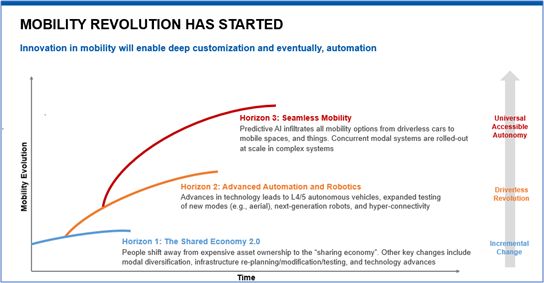 Create distance. When looking for potential opportunities, most agencies only look a few years ahead. Organizations that are truly focused on succeeding in the AV era need to adjust their scope to at least 10 to 20 years in the future. Doing so enables them to imagine scenarios outside the current confines of their industry or product.

Create the future in layers. Making plans for the future in an uncertain environment requires a layered approach. Begin with an overarching view of the world, examining the potential role AVs can play on a global scale. From there, zoom in to look at the future of the market in a particular city or state. Continue zooming in to the personal level, which is ultimately where consumer decisions are made that impact the transportation industry. This exercise can be done for each of the horizons pictured in figure 1, in order to anticipate how each stage of AV evolution could impact the individual.

2.    Grow capabilities
Understanding the range of ways that the transportation industry might change is not enough. The ability to actually adapt is paramount as a driverless future approaches. The agencies that are able to understand the scale of change and adapt accordingly will be the success stories.

Investing in capabilities is a major undertaking, but incorporating this process into the regular activities of the agency will help to make the process manageable in a step by step process.

Step 1: To better serve its riders and innovate in an AV world, agencies should articulate its position on autonomous and electric vehicles. Without a clear vision, and buy-in from executive leadership, operations will continue to function in silos and perpetuate a non-harmonious approach to the market.

Step 2: Once the vision is developed, transit agencies should prioritize short, medium and long-term opportunities and take a comprehensive portfolio approach to innovation.

Step 3: Develop an operating model to make the vision a reality. Agencies should assess how they need to evolve operationally to execute short, medium and long-term goals.

Step 4: Prototype pilots to test and learn. Much like JTA’s AV program, transit agencies should pursue pilot projects and partnerships to prototype offerings, test them and learn new insights. From there, agencies can decide to pivot if necessary.

3.    Create a bias for commercialization
All roads ultimately lead to commercialization. When it comes to AVs, this process is best approached through a methodology that allows organizations to explore efficiently, think iteratively and act quickly.

Successful commercialization is enabled by a series of processes that validates the problem or opportunity, relies on rapid but inexpensive testing and ultimately leads to a better financial resolution.

Companies are already doing this, and public transportation agencies need to do the same. For example, Dominos and Ford teamed up in 2018 to test how pizzas would be delivered with driverless vehicles. Using regular, human-operated sedans, Dominos completely cut off human-to-human interaction during the delivery process. What Dominos found was that the last 50 feet were the most challenging — getting the food from the car into the customers’ hands. The test provided Ford and Dominos with valuable data and insight into exactly how AVs will function in their respective industries.

Agencies that start imagining and strategizing around an autonomous tomorrow will be primed to lead their organizations even as rapid industry change becomes the norm. If AV technology lives up to the expectations of industry experts, it has the potential to radically alter the transportation choices that people make. But will it radically change how public transportation agencies operate? The decisions that agencies are making now will determine the answer to that question.