Close
Safety costs
In the past decade, over 255,000 buses were involved in a crash resulting in over 107,000 injuries and 1,180 fatalities in the U.S. alone, as reported by the US Department of Transportation (USDOT) Federal Motor Carrier Safety Administration (FMCSA) [1]. Although the exact value of the lives impacted is priceless, the agency has estimated that such crashes resulted in excess of $60 billion USD [1] in terms of medical, legal, property damage and economic costs, for example. Further, the USDOT National Highway Traffic Safety Administration (NHTSA) has reported that over 90% of vehicle-based crashes can be tied back to human choice or error [2], which means many of these crashes could have been prevented in the first place.

Considering these statistics, there is much we can do to save the precious lives lost on our roadways every day. With over 90% of such crashes being attributed to human error, this begs the question, what are we doing wrong? Research indicates that such crashes are perpetuated by drivers who engage in aggressive as well as distracted driving [2]. Fortunately, such behavioral issues can be corrected, therefore preserving many of the lives lost in crashes. With even marginal changes in driving behavior, millions of dollars, thousands of buses, and countless lives can be saved.

Lifecycle costs
In addition to the safety considerations that put roadway users at risk, the cost associated with how vehicles are used while in operations should also be considered. On an annual basis, public transportation providers consume more than 760 million gallons of diesel and gasoline according to the American Public Transportation Association (APTA) [3], which in today’s costs, translates to approximately $2 billion USD per year, assuming a conservative $2.50 USD per gallon of fuel. It should be no surprise that engagement in aggressive driving, which includes speeding, rapid acceleration and braking, leads to lower fuel economy. According to the US Department of Energy, such behavior can lower fuel economy by roughly 10 to 40% [4], resulting in approximately 7.6 – 304 million gallons of fuel or $190 to 760 million USD wasted simply due to poor driving actions.

On the opposite end of the spectrum, vehicle idling can consume anywhere between 0.25 to 0.5 gallons of fuel per hour [4]. Assuming that a vehicle is in service for 50 hours per week and an average idle time of 5 hours, this results in 1.25 to 2.5 gallons of fuel wasted in a week. Extrapolate that to a fleet size of 500 buses and this can cost a transit agency approximately $81,250 to $162,500 USD per year in fuel costs. Further, if we compare this to the total number of buses registered in the U.S., which is 888,907 [1] this results in approximately $140 to 280 million USD wasted on idling vehicles per year.

Driver Support
Considering the many problems highlighted and the associated costs, a majority of these issues are directly related to inefficient use of vehicles. Although transit agencies are required to provide continuous safety and training to their respective staffs, such methods can be further improved upon to lighten the burden on both the transit agency and general public. INIT has developed a software application suite, MOBILE-ECO2, meant to address the very issues described in the above passage. The driver support system acts as an end-to-end solution focused on improving the particular inefficiencies of vehicle use. Provided in the figure below is a generalized system interaction flow focusing on incentivizing efficient use of the vehicle. 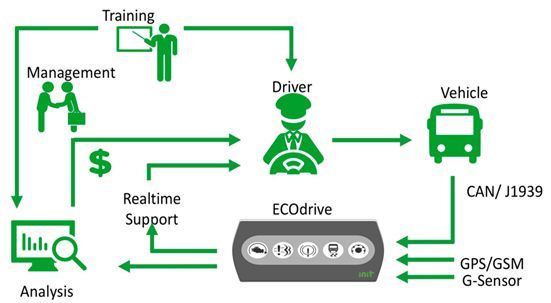 On the vehicle, a telematics computer interfaces with the standard SAE J1939 CAN, Inertial Measurement Unit (IMU) and Global Navigation Satellite System (GNSS) to monitor, analyze, transmit and store key data streams related to vehicle utilization. Key data streams include vehicle speed, engine speed, throttle/gas pedal position %, yaw/turn rate, acceleration rate, fuel consumption, vehicle distance traveled as well as vehicle position, to name a few. In addition to vehicle-use data, identifiers are also stored that allow for association to a particular vehicle, driver, trip, block and route. From these data streams, the on-board computer deploys algorithms to detect, present in real-time to the driver and store the following safety and inefficient vehicle utilization alerts: Harsh Acceleration, Full Throttle, Harsh Braking, Abrupt Turning, Excessive Speeding and Excessive Idling.  Such alerts are provided in real-time to the driver on our mobile data terminal as depicted in the figures below.

Upon completion of the trip and return to the garage, the on-board computer will upload the entire trip log, consisting of key data elements recorded every second, along with all the safety and inefficient vehicle utilization alerts detected to off-board systems. The off-board software systems then parse and stores all trip logs from installed vehicles in the fleet in a relational database to support analysis activities, as well as for historical purposes. Upon import into the database, the Driver Support System application provides a web user interface as well as e-mailed reports for transit agency personnel to review how vehicles are being utilized.

Provided in the first figure below is a high-level dashboard report view comparing how the individual garages or contractors within the transit agency are utilizing their vehicles. Key performance indicators such as event distributions, fuel economy and idling time distributions are provided in both graphical and table formats. In the next figure, an in-depth report can be generated which details how individual drivers are performing per garage or contractor. This report allows for transit agency personnel at the respective garage or contractor to understand which drivers are utilizing vehicles in the most safe and effective manner. 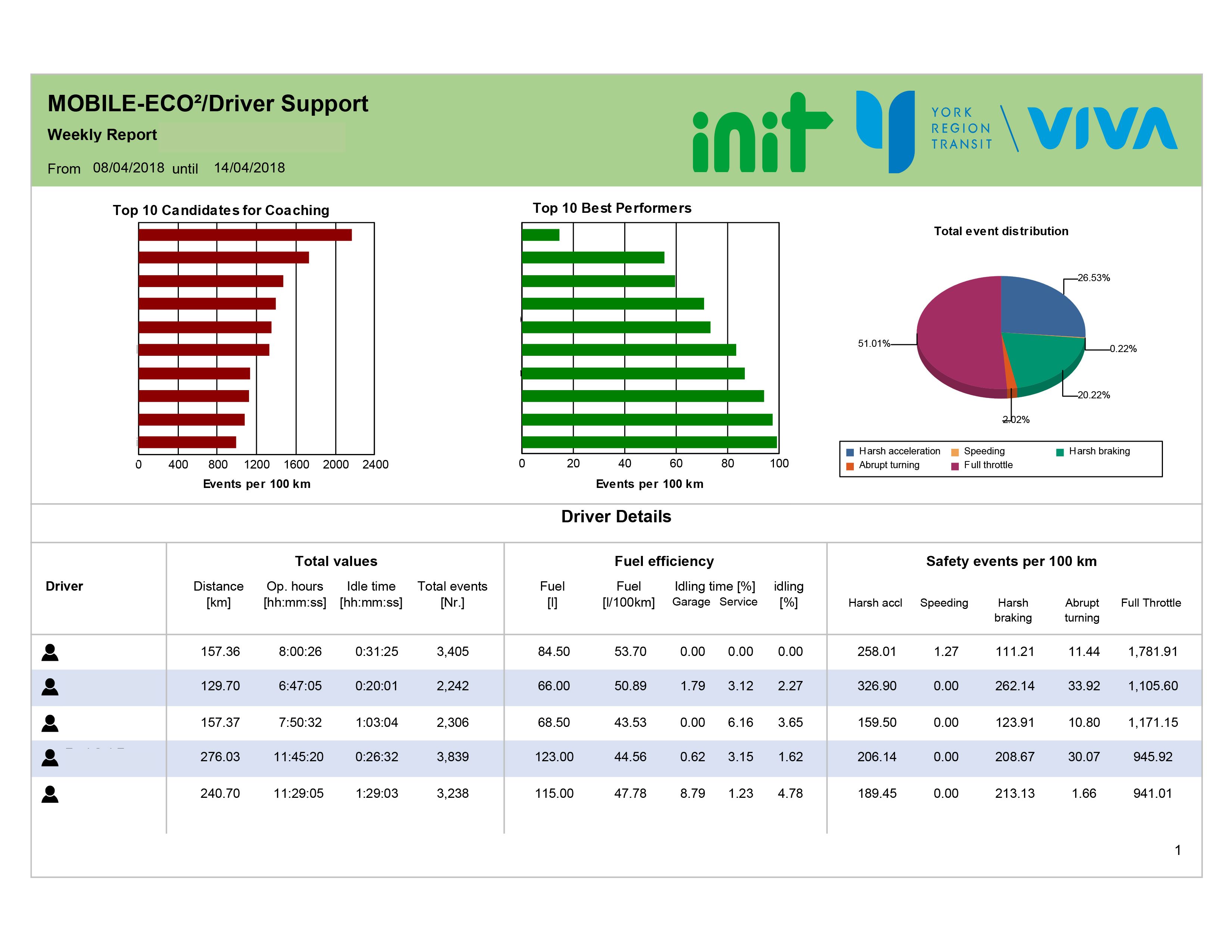 Case Study: York Region Transit (YRT)
INIT has worked closely with York Region Transit (YRT) to develop, test and roll out MOBILE-ECO2 on all new vehicles, while also working to integrate into later models. Although 100% MOBILE-ECO2 fleet installation and official incorporation into their safety and training programs is ongoing, the data collected has shown promising trends. As demonstrated in the Total Safety Events trend report in the figure below, upon initial introduction to the garages in December 2017, we have seen an average 50% reduction in unsafe and uneconomical vehicle use. Similarly, a reduction of total idling time while on service has also declined per the figure below.

Upon initial introduction to the (YRT) garages in December 2017, we have seen an average 50% reduction in unsafe and uneconomical vehicle use.

Such trends are bolstered by YRT staff monitoring this data while also communicating with the corresponding garages on improvements that can be made. Further, as described on their website, YRT/Viva's Anti-Idling program aims to further reduce exhaust emissions by restricting buses to a maximum idling time of three minutes. Additional benefits of this program include reduced fuel consumption, maintenance costs and noise impacts [6]. Such a benefit would not be realized if the MOBILE-ECO2 system was not installed on vehicles to provide collection of data, real-time alerts and analytical reports that provide actionable information. More importantly however, the commitment of YRT to ensure that their vehicles are being utilized in an efficient manner based on information provided by MOBILE-ECO2 is of paramount importance to ensure that safer, more efficient management of resources and better driver support can be accomplished. 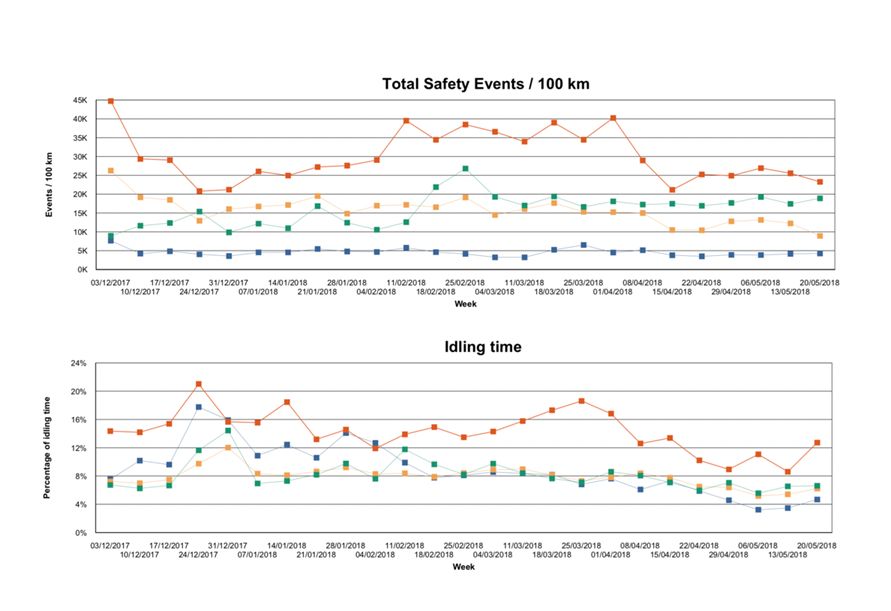