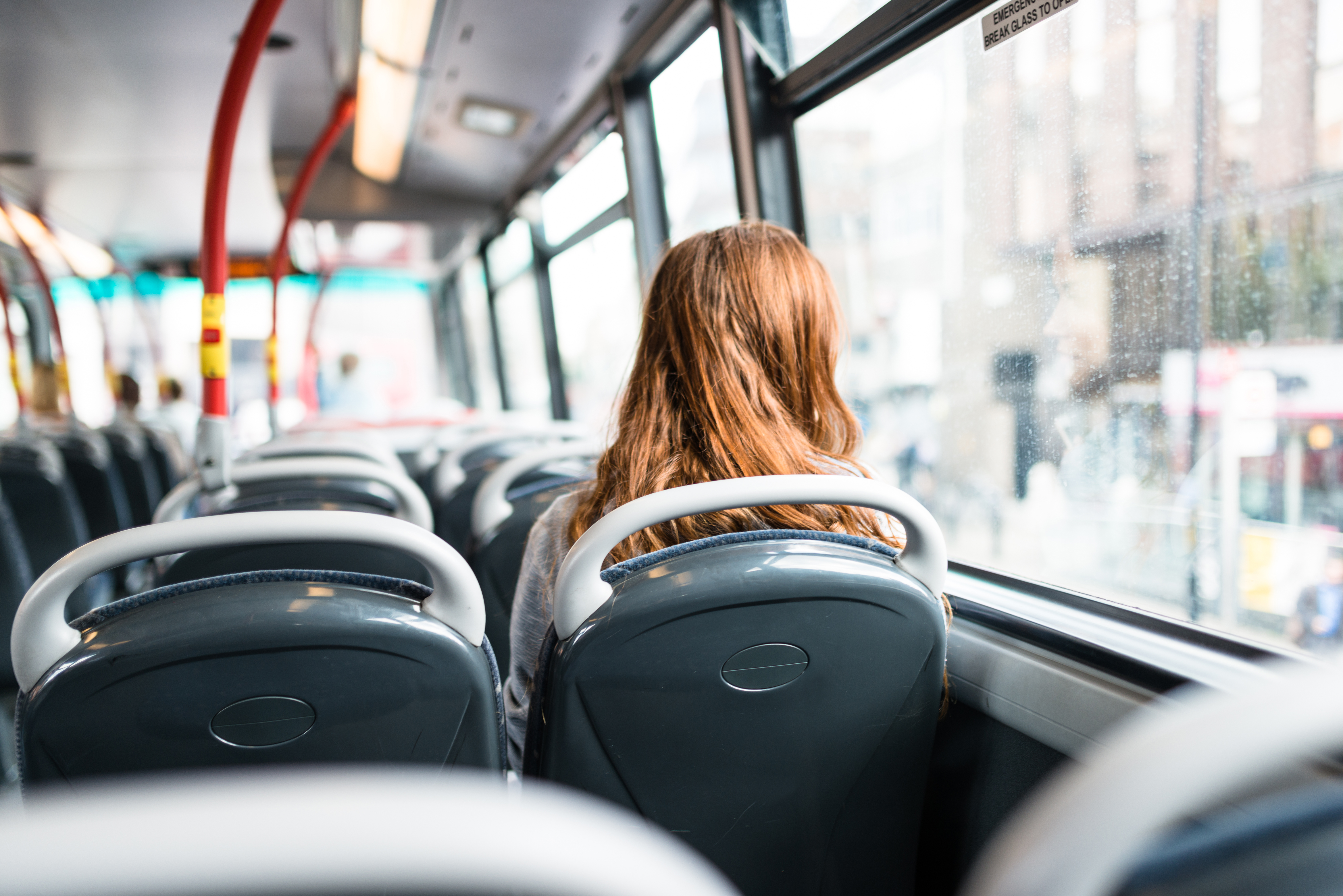 Transit riders, and especially women, are often victims of a wide range of offenses of a sexual nature that happen on buses and trains, as well as at bus stops and train stations. Getty Images/franckreporter

In 2017, the Washington Post published an article titled “Why the #MeToo Movement is a Public Transportation Issue.” The article observed that, “For many, it’s a depressing but foregone conclusion: if you’re a woman who rides public transportation, you’re almost guaranteed to experience the kinds of demeaning or threatening encounters that fit squarely within the bounds of the #MeToo conversation.”

The Washington Post article expressed a blunt truth. Transit riders, and especially women, are often victims of a wide range of offenses of a sexual nature that happen on buses and trains, as well as at bus stops and train stations.
Sexual harassment offenses fall into three categories: verbal, non-verbal, and physical. Verbal offenses include sexual comments, kissing noises, whistling, or even being asked to have sex. Non-verbal harassment includes indecent exposure, being shown pornographic images, and stalking. Physical harassment includes groping a person’s body or playing with her hair, unwanted kissing, as well as the most serious crimes of sexual assault and rape.

Understanding the extent and nature of sexual harassment on transit and responding to it is a critical issue for transit operators. If fear of sexual crime limits if and how people ride transit, the result is reduced mobility for certain segments of the population and lost ridership for transit agencies.

If fear of sexual crime limits if and how people ride transit, the result is reduced mobility for certain segments of the population and lost ridership for transit agencies.

Occasionally, transit agencies ask transit riders in onboard surveys about their experience with harassment. From such surveys and from the scholarly literature, we know that sexual harassment in transit environments is significantly underreported. Thus, it remains largely invisible to transit operators. But how is an operator to effectively combat an unknown problem?

Our study was designed to help fill that gap in knowledge. We focused on college students, a group that is characterized by relatively low car ownership rates and high transit use. We explored in detail if and how student riders experience sexual harassment, as well as how fear of such harassment influences their transit use. A better understanding of this issue gives transit operators the critical data on the scope and nature of the problem, which is necessary to identify effective solutions.

We conducted an online survey of 891 students at San José State University (SJSU), a large public university in the San Francisco Bay Area. SJSU is located in the downtown core of the city and is served by local and regional bus and rail services. The survey asked students about their experiences with harassment in transit settings, as well as their concerns with using public transit. Recognizing that transit trips are complex, multi-phased activities, the survey asked separately about harassment experiences waiting for the bus or train, on the transit vehicle, and walking to/from the transit stop. In what follows, we discuss our most important findings.

Sexual Harassment is Common on Transit
Sadly, the survey results reveal that sexual harassment is a common — even routine — experience for SJSU student transit riders, whether they ride the bus or train. Almost two-thirds (63%) of respondents had experienced some form of harassment while using transit.

Verbal harassment was the most common form of harassment, with 41% experiencing “obscene/harassing language” and 26% being subjected to sexual comments.

Sexual Harassment Creates Fear and Reduces Transit Use
The survey also found that students’ fear of sexual harassment reduces their transit use. When asked if they felt safe using transit, only half of riders reported feeling always or often safe. To reveal why students felt unsafe, the survey asked respondents whether they considered a range of environmental factors and criminal behaviors, including sexual harassment, to be significant problems on transit.

The survey provides strong evidence that the experiences of harassment have long-term impacts. Those students who had been prior victims of harassment were much more likely to report feeling unsafe using transit, consider sexual harassment a problem, report reduced use of transit, or take precautions when riding transit. Most strikingly, riders who had not been harassed took virtually no precautions of any kind.

Sexual Harassment Affects Both Genders, but Far More Women
Concern about harassment was much more common among women than men. For example, women were less likely than men to report feeling safe, twice as many women as men saw harassment as a problem, and 45% of female bus riders but only 7% of male riders said that fear of sexual harassment led them to reduce their use of the bus.

Also, significantly more women than men experienced harassment. As seen in the figure below, roughly twice as many female as male bus riders reported verbal and non-verbal harassment, and women were also more likely to have been physically harassed.

Types of harassment experienced by female vs. male bus riders 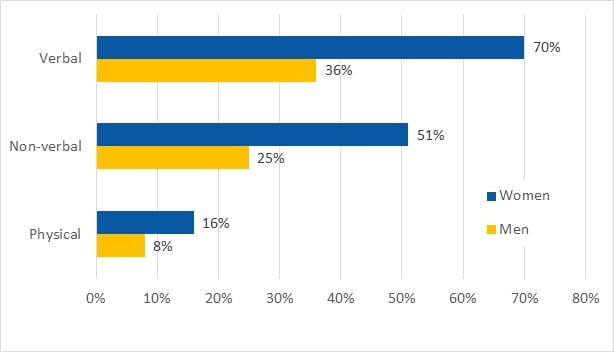 Women were also much more likely than men to take almost every type of safety precaution when using transit: limiting travel to daytime hours, waiting for transit only at well-lit places, sitting close to the driver, carrying a self-defense spray, and holding keys to use them for self-defense. The gap between women and men bus riders taking such precautions was more than 20 percentage points.

Although sexual harassment affects more women than men, the study clearly shows that men are also affected: many male survey respondents reported having been victims and worrying about harassment, and, in a few cases, men reported reducing transit use in response to that concern.

Sexual Harassment Remains Largely Unreported
Fewer than 10% of victims reported the harassment they had experienced to anyone at all, and those students who reported the experiences mostly did so to friends or family rather than to police or transit operators.

IMPLICATIONS FOR POLICY
Although sexual harassment is a problem that stems from cultural and social factors far beyond any transit operator’s control, there are many ways that operators can proactively address the problem to reduce its severity. Based on the study findings, we suggest the following actions.

Educate the public about harassment. Transit operators, police, and other responsible public agencies can instigate widespread educational campaigns against sexual harassment. Such campaigns, through ads and posters on transit vehicles and at transit settings, can raise awareness about the problem and encourage victims and bystanders to report sexual harassment incidents. A related finding is that many victims did not explicitly identify sexual crimes as such, so awareness campaigns should also educate the public about what behaviors constitute sexual crimes.

Institutionalize onboard surveys. Transit operators can better understand the problem and extent of harassment on their systems if they conduct systematic surveys that ask their passengers about their experiences with harassment. Questions should inquire about experiences not only onboard the transit vehicle but also at transit stops and on the way to/from transit.

Make reporting of harassment easy. The finding that almost none of the SJSU student victims officially reported the crime underscores the need for transit operators to make reporting easy for transit riders. Smartphone apps and dedicated phone lines can help victims report harassment and other crimes in real time.
Give attention to the physical environment. Respondents made clear that poorly maintained and dark transit environments made them fearful, a finding that points to the value of keeping transit settings well-lit and well-maintained.

Learn from industry best practices. Of course, the complexities of transit operations may require solutions that are different from what passengers ask for. To better understand feasible and tested actions, operators also have a great deal to learn from the practices of transit operators that have prioritized efforts to reduce sexual crimes, including the Washington Metropolitan Area Transit Authority (Washington, D.C.), Transport for London (England), Metro Vancouver Transit Police (Canada), and the Toronto Transport Commission (Canada). Some of these efforts include anti-harassment campaigns, training of transit vehicle operators, request-a-stop policies, and use of digital technologies to report harassment events.

In conclusion, our study indicates that sexual harassment in transit environments is a common experience for many transit passengers, especially young women, even though the practice is not visible through official crime statistics. Most victims and bystanders do not report it, and many transit agencies do not directly ask passengers about it. However, sexual harassment has significant negative effects: it reduces essential mobility for some community members, and creates fear and discomfort when using transit for at least half of riders. A multi-pronged approach against harassment can go a long way to making the transit trip less stressful and more enjoyable.

Dr. Loukaitou-Sideris is Associate Dean of the UCLA Luskin School of Public Affairs, and Professor of Urban Planning.