Close
Despite Los Angeles County’s legendary traffic jams, residents remain wedded to their cars and reluctant to use public transportation due to concerns over safety and convenience, according to the new USC Dornsife/Union Bank LABarometer mobility survey. But in identifying specific concerns, the survey, also pointed to potential solutions for increasing use of public transportation.

Private vehicles are used at more than twice the rate of the second-most popular transportation mode, ride-hailing (e.g. Lyft and Uber). Respondents considered personal vehicles the safest, most convenient and enjoyable way to get around.

“This survey underscores how important the full customer service experience is, in transit and other modes,” said Marlon Boarnet, chair of the Department of Urban Planning and Spatial Analysis at the USC Sol Price School of Public Policy. “Safety and convenience are key factors that are limiting the alternatives to the car, but Los Angeles can become a city where everyone has viable alternatives to driving. The data in this study help highlight the challenges and opportunities, and help point the way forward.”

LABarometer respondents love their cars in part because they feel safer from crime. However, car users are more vulnerable to accidents: 15% of residents were involved in an accident/collision last year, most commonly while driving, according to LABarometer.

“It’s fascinating that people believe they are safer in cars than in public transit. That’s simply false. There are 40,000 deaths per year on the highways, but only a fraction of that number of deaths on mass transit. We all feel safe and comfortable with what we know—in this case, driving,” said Wendy Wood, Provost Professor of Psychology and Business at the USC Dornsife College of Letters, Arts and Sciences. Wood is also a member of the Board of Directors of the Los Angeles Metro’s Office of Extraordinary Innovation.

The mobility survey, conducted from December 11, 2019, to February 7, 2020, asked 1,400 L.A. County residents a series of questions about their transportation behaviors, experiences, and attitudes to better understand how Angelenos travel around L.A. County and why they make the transportation decisions they do. During the initial phases of survey design, the survey team consulted with transportation agencies, mobility companies and non-profit organizations to better understand key data gaps.  No financial consideration was provided to the consulting entities. 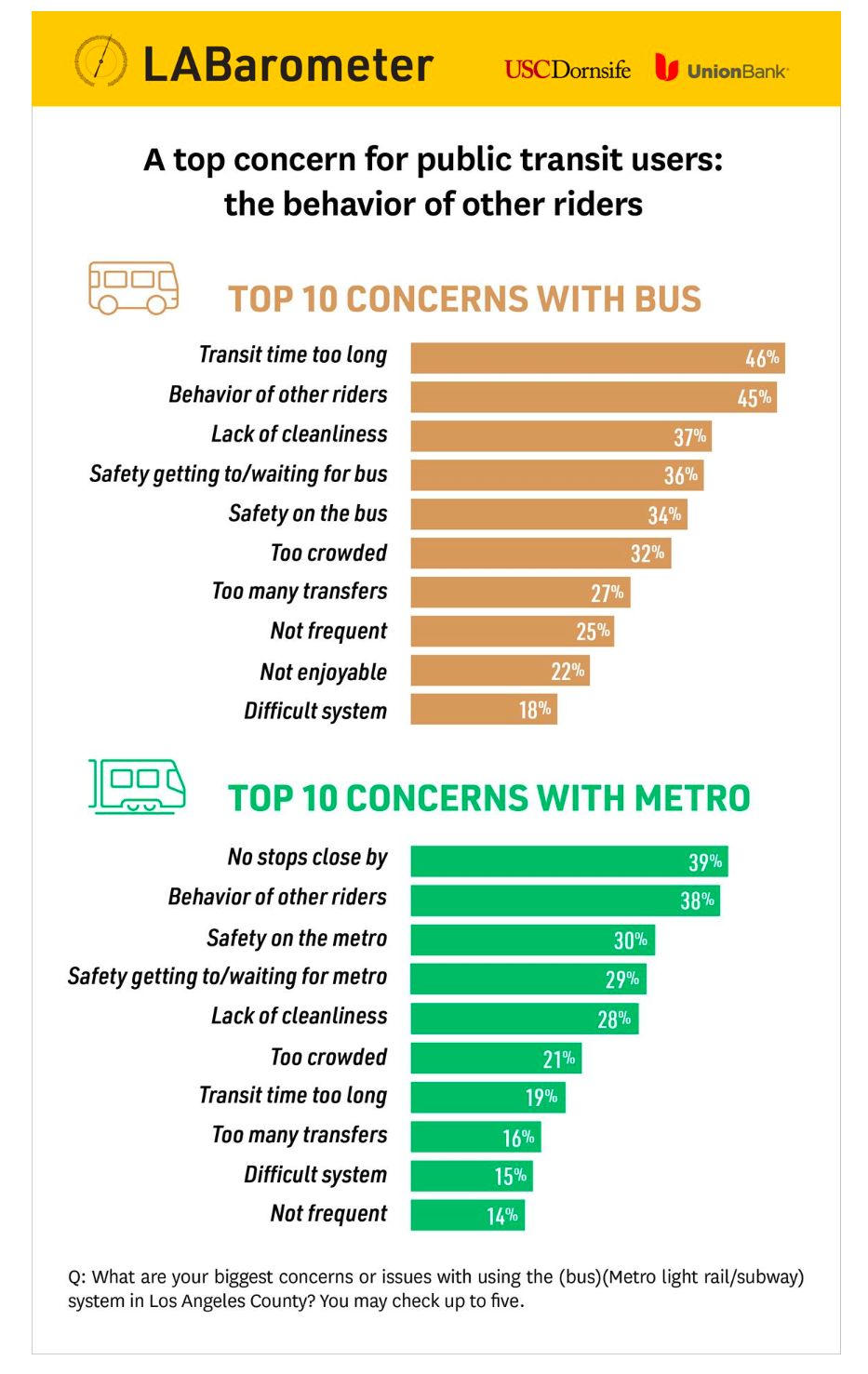 Cleanliness, convenience-related issues, and safety getting to or waiting at stops were top-10 concerns for each system. 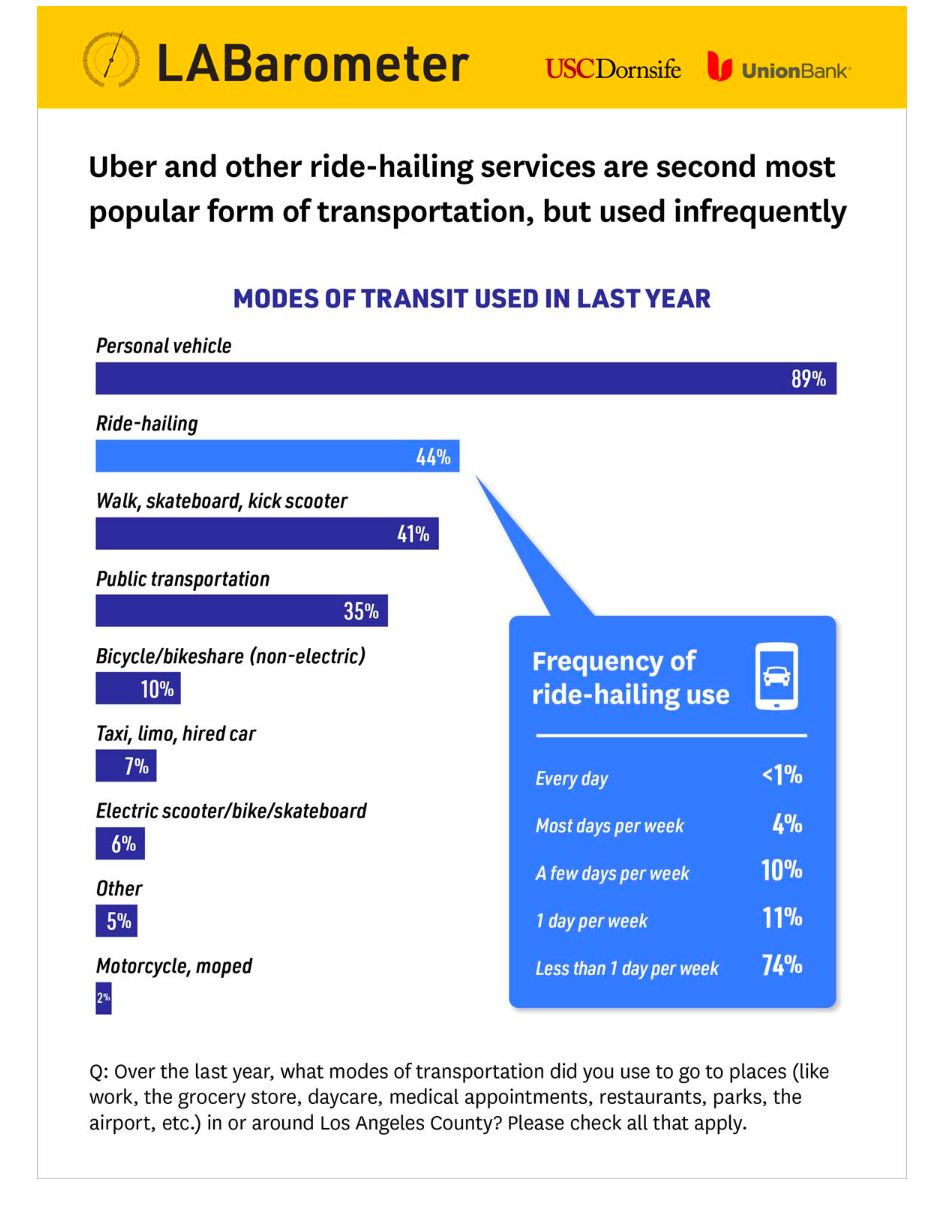 “Our findings suggest that safety improvements could get more people on the Metro,” said Kyla Thomas, director of the LABarometer and a sociologist with the USC Dornsife Center for Economic and Social Research.  “But improving convenience for daily activities is likely to get people to use the Metro more frequently, as a real substitute for the car.”

Conversely, there may be tipping points that finally persuade drivers to make greater use of public transportation.

“The habit of driving persists even when traffic becomes the nightmare that it is in L.A. today,” Wood said. “But motorists will change their habits and use more public transportation if you add some friction to driving, such as making parking more expensive or simply unavailable.”

For those who use public transit, walking is by far the most popular way to get to a bus or Metro station. Yet, the LABarometer shows that more travel-related incidents of harassment and assault are happening on our sidewalks than anywhere else, and to women more so than men. Sixteen percent of women and 5% of men said they experienced some form of sexual harassment last year while traveling. Seventy-four percent of those who experienced sexual harassment or assault reported that they were walking at the time of the incident.

Who's on scooters and e-bikes? 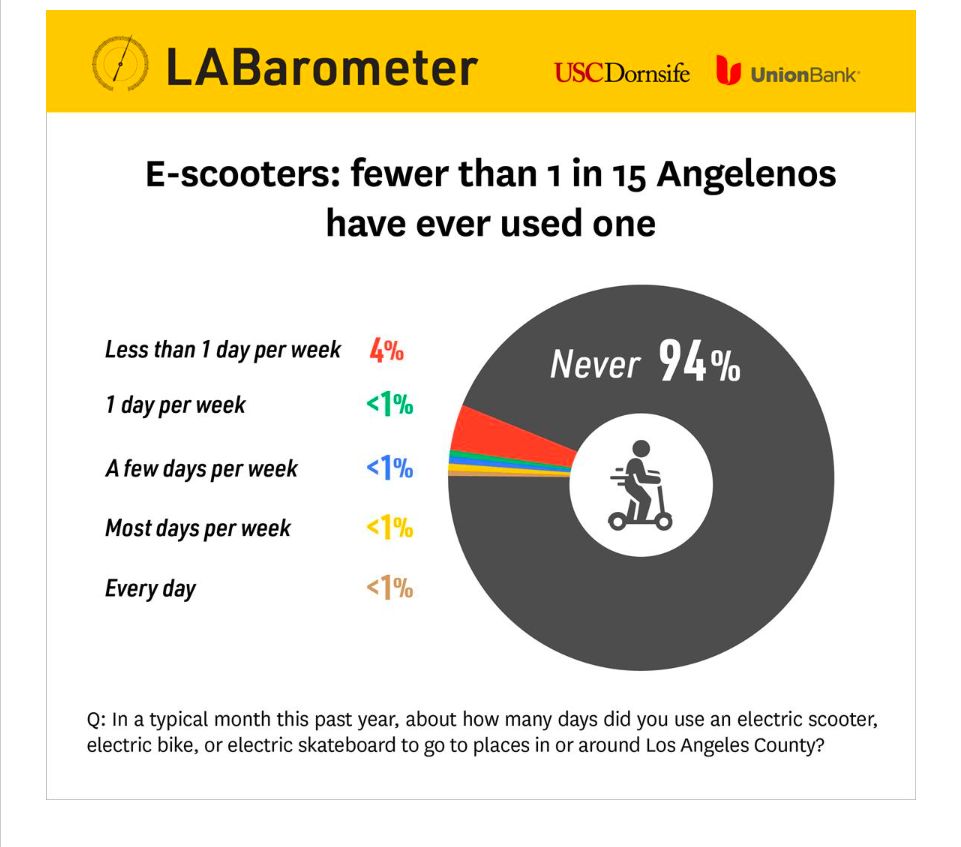 Perhaps not surprisingly, residents who use e-scooters or e-bikes are more likely to use the Metro. But despite the amount of media attention devoted to these newly arrived modes of transportation, 94% of residents said they’d never used them. Fewer than 2% of people said they used them at least once a week.

About USC Dornsife/Union Bank LABarometer
LABarometer is a quarterly, internet-based survey of Los Angeles County residents, designed and administered by the USC Dornsife Center for Economic and Social Research. The survey monitors social conditions and attitudes in Los Angeles, with a focus on four key issues: livability; mobility; sustainability and resilience; and affordability and prosperity.