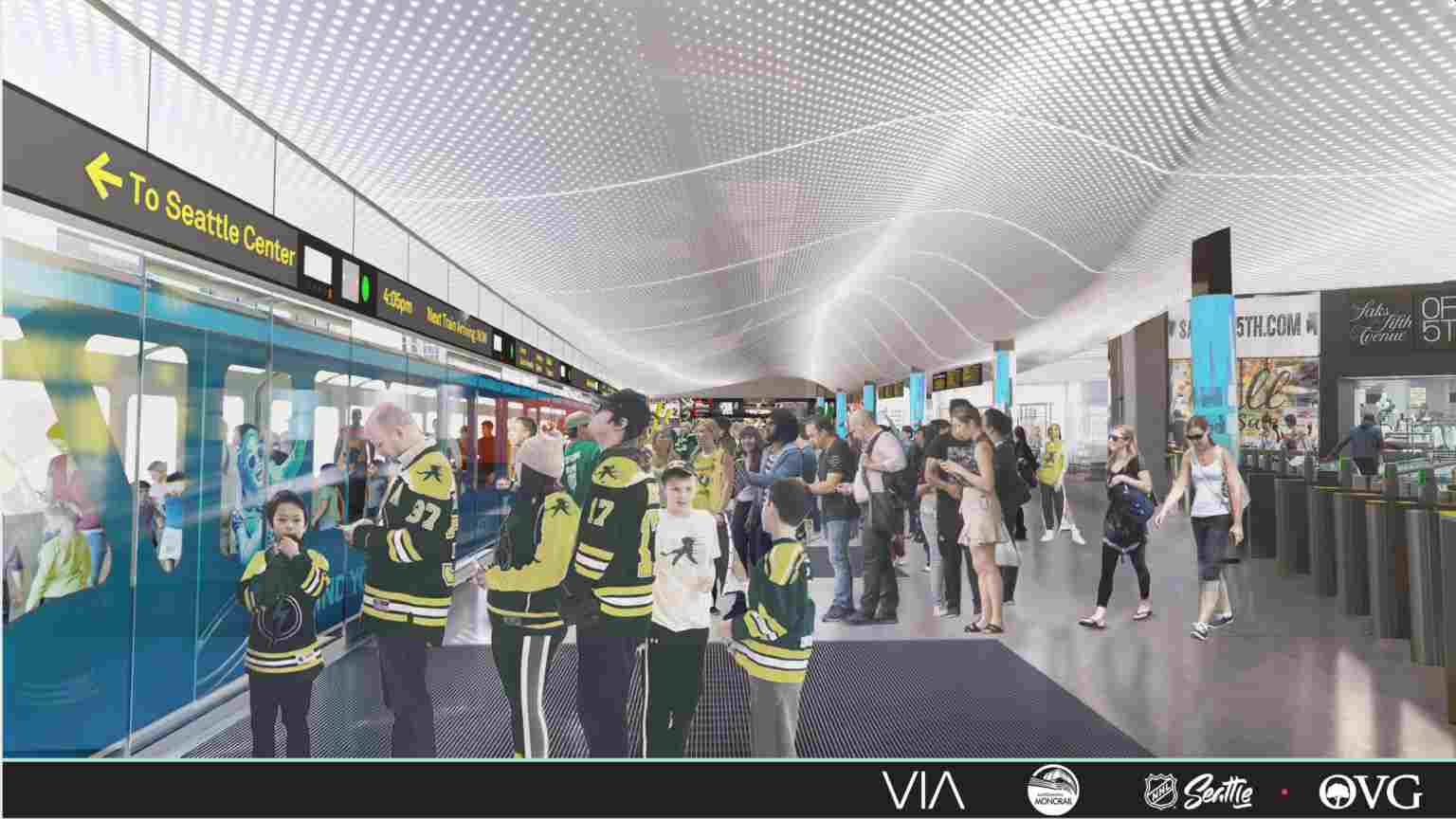 NHL Seattle will make a private capital investment of up to $6 million at the Seattle Monorail's Westlake station to achieve upgrades. SMS/VIA

NHL Seattle, the professional ice hockey expansion team based in Seattle, announced they will offer subsidized public transit for all fans attending hockey games at the team's new arena opening in 2021. Additionally, the team has partnered with Seattle Monorail Services (SMS), operator of the Seattle Monorail, to make capital improvements to the system.

NHL Seattle becomes the first Seattle-based sports franchise and only the third professional sports organization in the U.S. to offer a free public transit benefit for fans. Only the NBA’s Phoenix Suns and the Golden State Warriors have similar programs-and Seattle’s is by far the most ambitious. The only exception will be fans who already receive ORCA card (the regional transit pass card) subsidies from employers.

Seattle Center Monorail will celebrate its 58th year of service in Seattle this year. The Monorail was built for the 1962 World’s Fair. During the six months of the Fair, this system carried over 8 million passengers, equivalent to about 45,000 passengers per day.

As part of the partnership with SMS, the current Monorail operator, and NHL Seattle will make a private capital investment of up to $6 million at the Westlake station to achieve upgrades including improved platforms, modernized electronic fare gates (making ORCA card use even easier) and additional elevator access.

These improvements were informed by the Station Configuration Evaluation Report completed by VIA Architecture in 2018. A major recommendation from the study was to increase capacity by decreasing the amount of time it takes to load and unload passengers from each train. Monorail station improvements seek to accomplish the following:

"The Monorail is generally thought of as a tourist attraction or ride," says Lance Lopes, NHL Seattle executive VP and general counsel. "We plan to re-introduce people to the idea that the Monorail is still what it was designed to be — high-speed transit. It's an existing last-mile high-speed connection from downtown to the arena that any number of sports teams would love to have in their cities."

The NHL team's decision to include free public transit via ORCA with season ticket packages and single-game tickets is anticipated to encourage fans to be part of a better flow to and from games. It's phase one of a three-part plan to be unveiled in coming months. 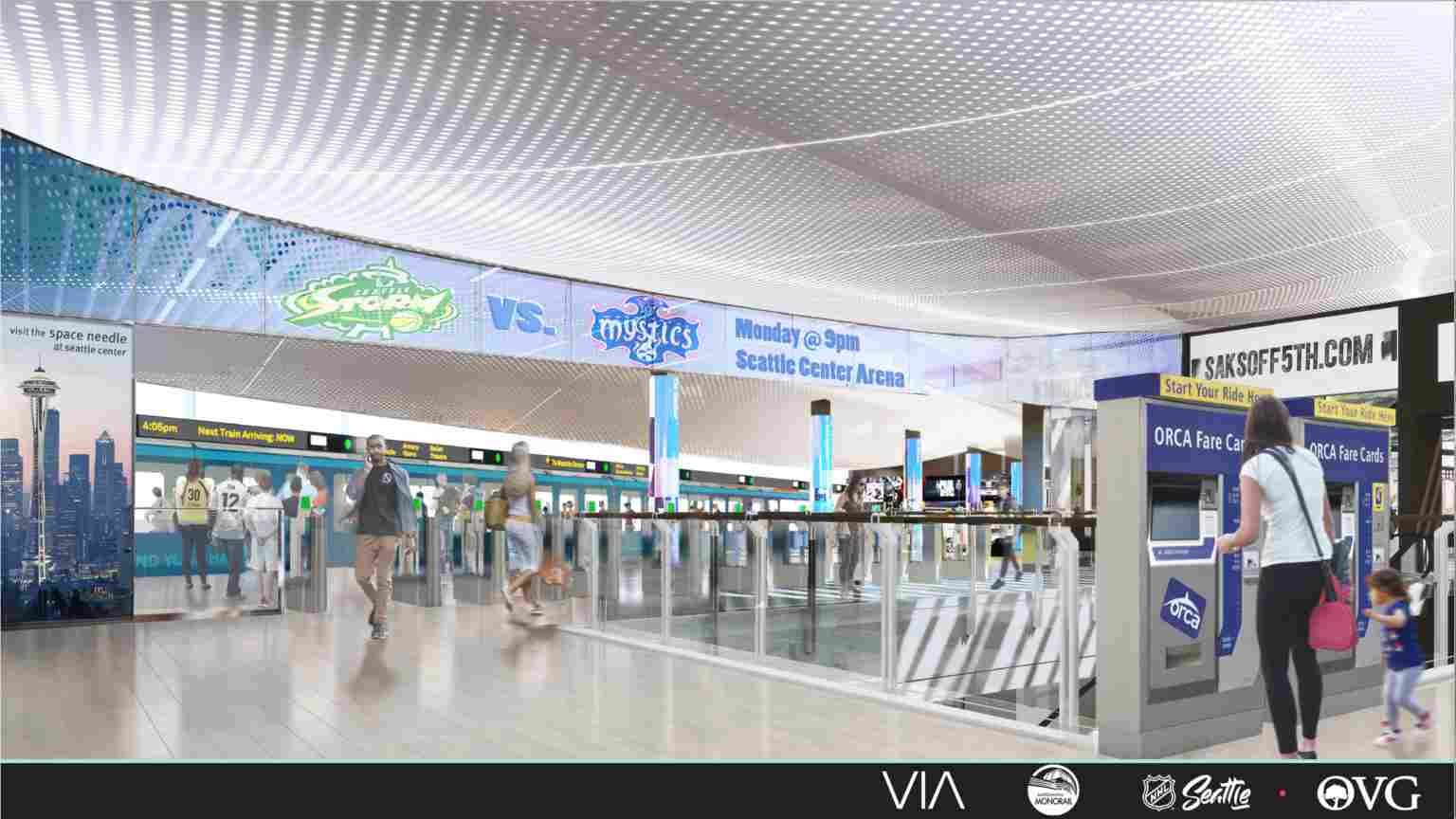 "We expect around 25% of fans to use public transit in our first year," said Rob Johnson, vice president of transportation for NHL Seattle who notes total transit boarding in the central Puget Sound region increased by 2.4 million people year over year, the largest increase among the top 50 urbanized areas in the nation. "The use of public transit can become a unique part of the fan experience [including 90-second bursts of fun information] and will likely be the quickest and most reliable way to get to and from our games. It's about a system which will both be efficient and build culture."

Tom Albro, SMS owner, promises that the monorail "will be able to recognize your form of ticket [and bar code] to eliminate waiting in line. He also pledges that both of the landmark monorail trains will be running during games and concerts, speeding up the load on/load off even more. The trains can handle 325 fans per trip, basically every two minutes per direction.