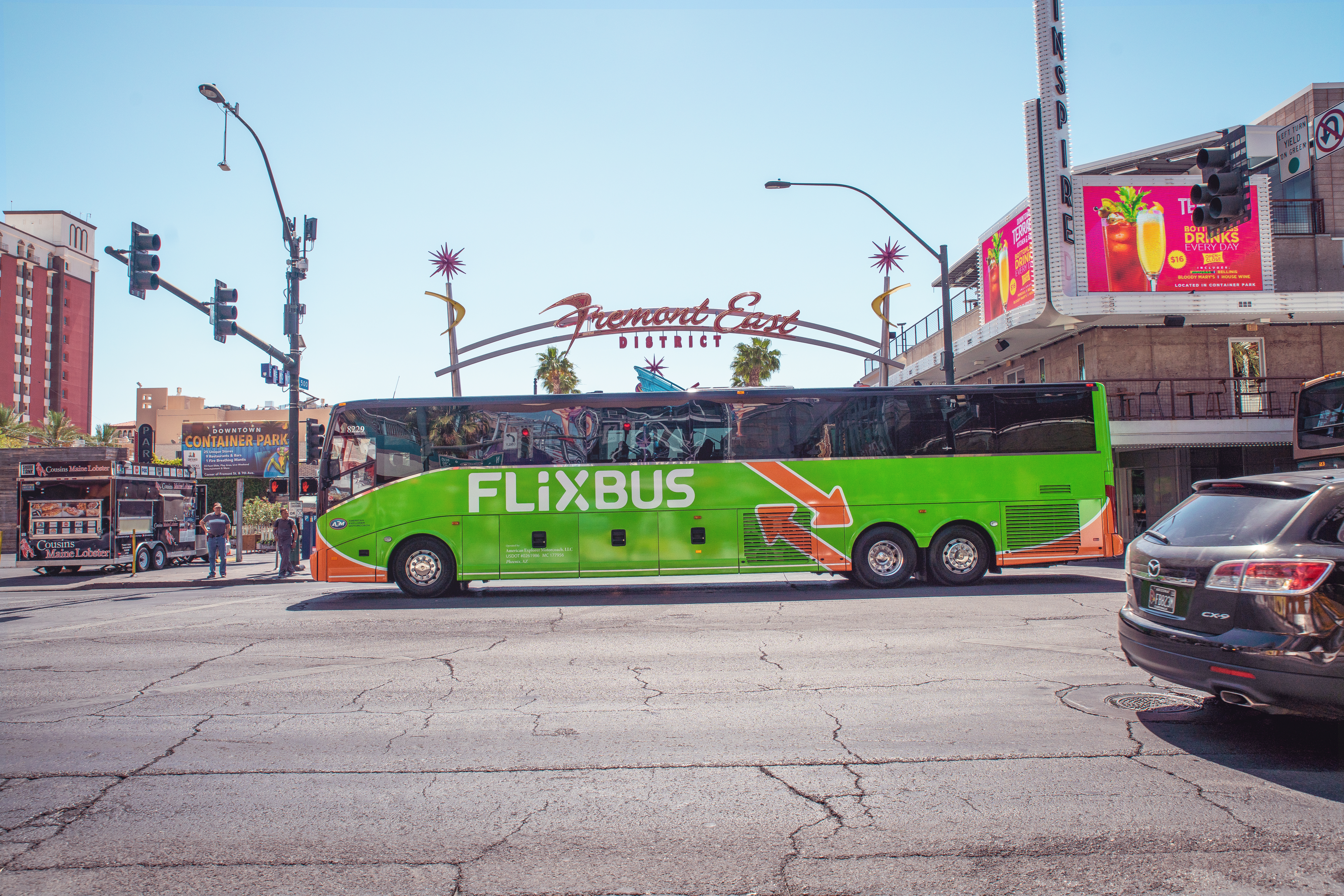 After starting off in the west and southwest, FlixBus has added routes in upstate New York, Pennsylvania, Florida, and the South. FlixBus

So much has been happening in the intercity bus industry lately that it’s understandable if you have a hard time keeping track of all the recent developments.

1. Three Big Players Now Competing across the Country
For the first time, there are three carriers with large-scale route networks that cover larger parts of the U.S. mainland: Greyhound, Megabus, and the newcomer FlixBus. All made notable strategic moves last year, with FlixBus announcing new routes almost every couple weeks, putting it in 22 states, including significant parts of the East and West Coasts, Florida, and Texas. This year has been much the same: FlixBus has added routes in upstate New York, Pennsylvania, Florida, and the South.

The implications of FlixBus’s ambitious expansion are much greater than just having a new competitor in the mix. The German-based carrier is pushing the envelope on data-driven approaches to finding optimal locations for it's bus stops, as well as using airline-style dynamic pricing. FlixBus uses a hybrid approach that involves overlapping local, express, and intra-regional routes, melding point-to-point express service with more locally oriented runs. Its algorithms allow schedules to be adjusted with great regularity — sometimes weekly — so that service patterns vary dynamically in response to demand shifts.

Greyhound is vigorously protecting its passenger base while becoming quite adept at using its own technology to optimize its seat inventory. In the past, the carrier has allowed open ticketing on certain routes, in which passengers can get on buses of their choice without a formal reservation. Following a change last year to its casino-oriented Atlantic City routes, however, the entire Greyhound-operated route network is 100% reservation based. In addition, at more than 50 of its stations, Greyhound rolled out new LCD arrival and departure monitors, giving passengers an experience more closely resembling airports. Information on the monitors is also fed to its BusTracker app and website. Passengers previously often had to settle for static signs and PA announcements to find out where and when to board their bus.

2. Solving First/Last-Mile Problems
The barriers that have long separated intercity bus lines from other more flexible modes of travel, such as taxis and ridesharing, are gradually falling — thanks to technology. This is helping the industry serve customers in places without good connections to bus stops. In July, Hampton Jitney in New York launched a program with Via rideshare in which customers, after making a reservation, receive a discount code for Via’s shared-ride shuttle service between Hampton’s Airport Connection bus stop and LaGuardia or John F. Kennedy airports. Customers can redeem the discount to or from the airport.

Salt Lake Express/St. George Express, which serves Idaho, Montana, Nevada, and Utah, stands out for its “Door-to-Door” program. This offering allows for passengers in Logan and St. George, Utah, and Rexburg, Idaho to be picked up and dropped off anywhere in designated zip codes near these bus stops through taxi connections. Once a customer opts in and provides a pick-up or drop-off address, a ride is arranged — a service reportedly used by about 10% of customers.

N.Y.-based OurBus offers free shared taxi rides at its Ithaca stops Customers who enter their desired address and luggage requirements during booking are grouped and assigned to specific taxis, with consumers being alerted about their ride through “push notifications.” More than 300 rides were reportedly handled in this way in a pilot program last year, and a second phase of the program is now underway.

Third-party booking platforms use schedule data to build complex itineraries and summarize travel options. Boston-based Wanderu has a full suite of Google Map features to help users plan their itinerary, including geo-location features that gives those who enter a specific addresses myriad options with varying transfer points, cost, and travel time. Wanderu made headlines in autumn by signing a deal with Kayak.com, which allows consumers to simultaneously evaluate air, bus, and train options. Booking site Busbud has several integrative features as well.

3. State Governments are Hopping Onboard
State governments are growing more sophisticated in embracing intercity bus service to fill mobility gaps. The Commonwealth of Virginia, for example, is having much success with its Virginia Breeze, a branded service operating with state financial support between Blacksburg, Va., and Washington, D.C., via Christiansburg, Va., offered in cooperation with Megabus. The Breeze enjoyed a 28% ridership increase in the third quarter of 2019 over the second quarter of 2018 and an impressive 79% farebox recovery. Significant expansion to this state-supported system is in the works. In December, the department announced its intention to launch a pair of new Virginia Breeze routes in 2020. The first would cover the roughly 250-mile distance between Danville, Va., and Washington, D.C., with likely stops in Lynchburg, Charlottesville, and other points. The second would link Martinsville and Richmond via Farmville.

Colorado’s Bustang is another standout performer. Managed by the state’s Department of Transportation, Bustang now handles more than 20,000 passengers per month. In early 2019, Bustang added a sixth weekday Denver–Ft. Collins trip, while December saw the introduction of Snowstang, a direct service from Denver Union Station to the Loveland Ski Area, Arapahoe Basin, and Steamboat Resort/Howelsen Hill. This service is available on weekends and select holidays and allows Arapahoe Basin and Loveland Ski Area skiers to make day trips. The program helps ease traffic congestion on roads leading to resorts and constitutes one of the most notable statewide initiatives to coordinate and support intercity bus service with both tourism and economic development in mind.

In July, the State of Oregon announced new funding to sustain and expand service, as well as commission a planning feasibility study for service from Klamath Falls to Redmond, a distance of 154 miles. Results publicized in September indicate that bus ridership in Central Oregon provided by Cascades East Transit has more than doubled since 2014, reaching more than 674,000 annually, in part due to new service offerings, including three new routes to Bend.

Other states are also taking a ride. Illinois, working with Greyhound, created a new Rockford–Champaign-Decatur, Ill., route last year catering to workers in the expanding logistics business in northern Illinois. Barons Bus added a new daily service between Chicago and Toledo, Ohio, with State of Indiana financial support. Many of the new services are partially sustained with public dollars, including the Federal Transit Administration’s 5311(f) program funds.

Expect new trends and industry developments to emerge by summer as investment flows into the often-neglected intercity bus sector. The novel coronavirus is abruptly changing travel behavior, fuel costs are declining, and Greyhound Lines is being offered for sale by owner FirstGroup. New and surprising developments are certainly on the horizon.

Joseph Schwieterman, Ph.D., is co-author, with Brian Antolin, of Making Connections: 2020 Outlook for the Intercity Bus Industry in the United States. To receive free quarterly emails about the sector from DePaul University’s Chaddick Institute for Metropolitan Development, publisher of the report, email chaddick@depaul.edu