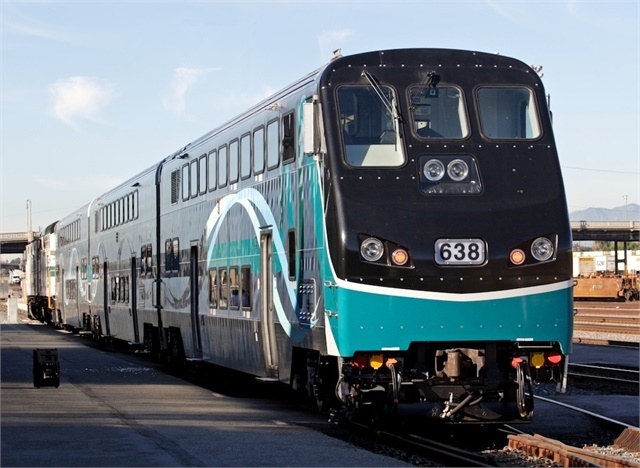 Funds from the CRISI Grant Program are designed to increase safety, efficiency, and reliability of intercity passenger and freight rail systems. Metrolink

The U.S. Department of Transportation (U.S. DOT) announced an award of $10.7 million from the Consolidated Rail Infrastructure and Safety Improvements (CRISI) Grant Program to fund passenger rail safety and speed improvement projects in Metrolink's critical Burbank-Anaheim Rail Corridor, one of the busiest thoroughfares in Southern California.

The $10.7 million grant will partially fund the Burbank Corridor Speed and Safety Improvements Project, which will enhance service on Metrolink’s Ventura County and Antelope Valley lines. Nearly 100 passenger and freight trains operate each weekday through Burbank and Glendale. The federal award will be matched with state funds to cover the balance of the project.

Funds from the CRISI Grant Program are designed to increase safety, efficiency, and reliability of intercity passenger and freight rail systems. The Los Angeles County project will improve the tracks and signal controls between Metrolink’s Burbank Airport-South and Glendale stations, which will reduce train congestion and increase on-time performance on track shared with Amtrak’s Pacific Surfliner and Coast Starlight services, along with the Union Pacific Railroad freight services.

In addition to the projects along the Burbank-Anaheim Rail Corridor, Metrolink is working to implement the Southern California Optimized Rail Expansion (SCORE) Program which will improve rail infrastructure to facilitate more frequent service by the 2028 Los Angeles Olympic and Paralympic Games.

According to the Los Angeles Economic Development Corporation (LAEDC), the SCORE Program is expected to create 113,100 jobs before the 2028 Olympic and Paralympic Games and an estimated 1.36 million jobs by 2050. The LAEDC also estimates SCORE will add more than $1.17 trillion to Southern California’s economy, while reducing 51.7 million metric tons of greenhouse gas emissions.