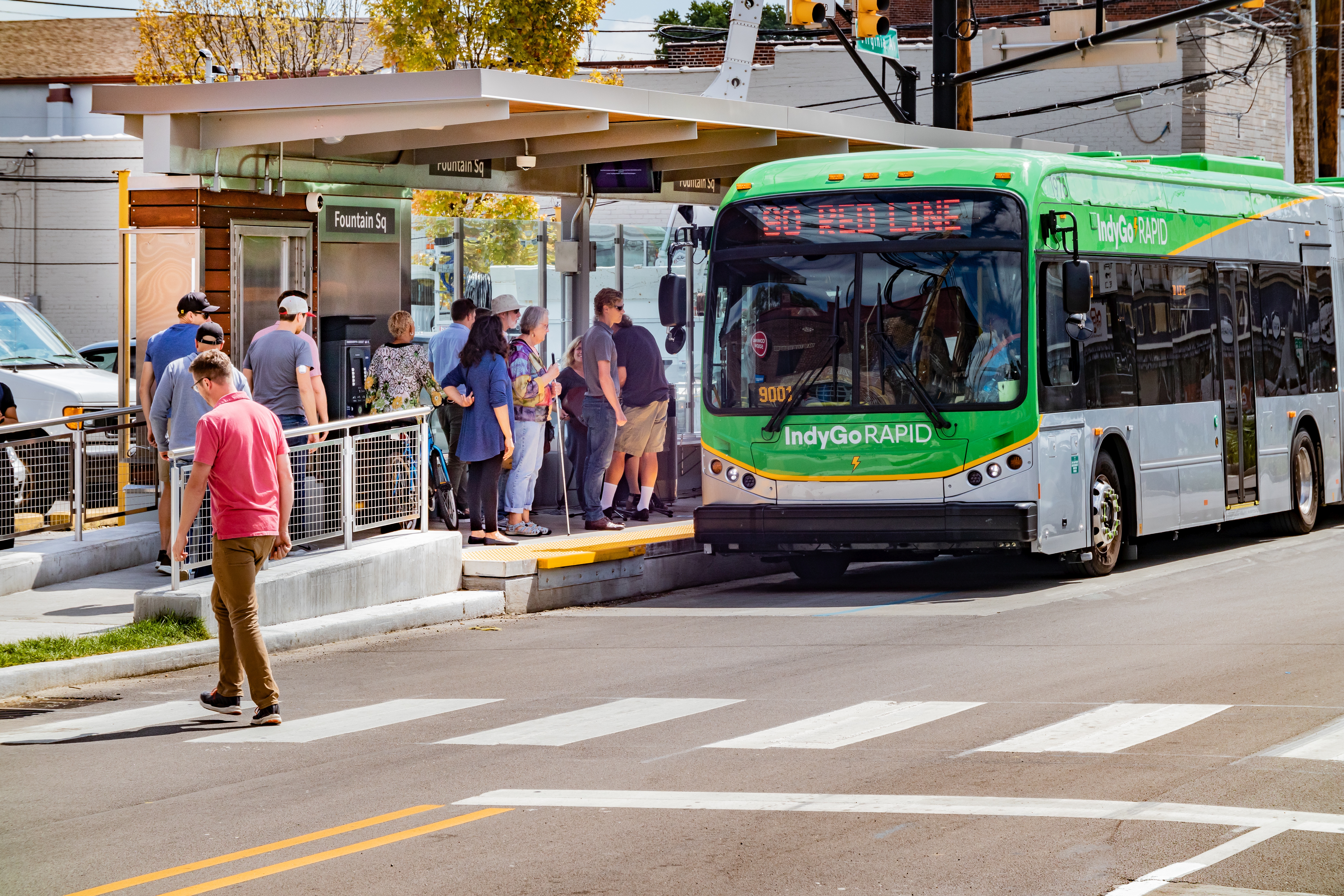 IndyGo's Red Line BRT service is the first step towards increasing service and making it easier to get around the city. All photos IndyGo

In September, Indianapolis’ IndyGo launched its Red Line BRT system, the first of three planned BRT lines that are set to revamp public transportation in the city.
The 13-mile, 28-station Red Line rolls within a quarter mile of more than 50,000 residents and nearly 150,000 jobs, or, one in every four jobs in all of Marion County.

Notably, the Red Line is using battery-electric buses from BYD for the service, which like many BRT systems around the nation, features bus-only lanes, off-board ticketing, a digital marquee displaying real-time bus information, ADA-friendly accessibility, and wind screens and drip-free roof eaves for better weather protection. The agency is also in the process of installing audible signaling at each of its crosswalks to enhance accessibility for ADA passengers.

Inez Evans, who took over as president and CEO of IndyGo just weeks before the launch of the system, explains that she hit the ground running to make sure the agency “put it’s best foot forward” once the system launched. She adds that the launch wasn’t without its glitches, though.

“Most of the hiccups we had initially were with the technologies we deployed alongside the system, including our CAD/AVL system, ticket vending machines, and the buses themselves,” she says. “On a positive note, I will tell you that [our] team has some out-of-the-box thinkers who tried to come up with solutions and worked in tandem with the manufacturers, who were also great, to solve those issues.”

With the initial glitches sorted out, the Red Line was incredibly well received by the community, with ridership reaching 246,000 in the first month. That trend has continued into the new year with the agency recently reporting Red Line ridership up 6% in January compared to the month before, while ridership overall was up 8% for the month. This marks the second year in a row that IndyGo has seen an increase in ridership in January, despite the fact that the area experiences a spike in cold weather during that time.

“The Red Line is just a billboard advertisement rolling down the street every single day that is causing people to tell us they want rapid transit in their area,” Evans says. “We are meeting with all the mayors in the areas that are really working through campaigns to be able to financially support the bus service coming into their areas. But what our team is working heavily on right now is to perfect what we already have.”

Improving Service
With the goal to perfect the current bus system, the agency is in the process of moving from a hub-and-spoke system to a grid system, which means a full redesign. The agency is embarking on the process in pieces, Evans explains, with the new system set to be in place in June.

There is excitement in the region for the revamp, which is long overdue, Evans adds.

“I did a presentation not too long ago and my team gave me a map of the system from 1945 and the system hadn’t changed,” Evans says. “Here we are 70-plus years later and it’s still the same system.”

While the revamp may add transfers to those who currently enjoy a one-seat ride, the increased frequencies and better connections will enable better options for IndyGo’s ridership, she explains.

“We’re going to connect to the Red Line, which will give riders a faster speed downtown, so we’re making it seamless,” Evans says. “We think its going to revolutionize how Indianapolis travels.”

While the system reboot was already in the works before Evans came aboard, she explains it is now up to her to implement the plan, which includes hiring and updating its training program to make sure the agency has enough bus operators to actually run the network, as well as making sure the maintenance team has everything it needs to keep the agency’s bus fleet up to speed.

With route-optimization plans already implemented in several cities like Houston and Sacramento, Calif., IndyGo has undertaken this plan through a balance of feedback from both its peers and the community.

“You definitely want to learn from your peers and find out their lessons learned and how they analyzed and measured success,” says Evans. “We’re also looking at our service standards. And by talking with our local leaders and the community, we have gotten some good feedback and have been able to really fine-tune our plan.”

Mobility innovations
While there are already car-sharing, bike-sharing, and scooter services in place around Indianapolis, IndyGo and the city continue to explore ways to increase both accessibility and mobility.

“Many in the transit industry have tried to be the solution for everything,” says Evans. “We are in the business of moving people and are willing to partner to be part of the larger solution by integrating with other solutions.”

Last March, IndyGo and the City of Indianapolis launched the $100,000 City:One Challenge. Developed by Ford, the Challenge is a community-centered initiative that explores a city’s transportation needs and then implements new solutions through collaborations. Following six months of community workshops and input, local research, and the framing of key mobility issues, applicants submitted 120 proposals to the Challenge, with 12 finalists selected. From those 12 projects, four were ultimately selected for implementation.

The first City:One Challenge winner, granted in the amount of $75,000, is the pilot proposal from AbleLink Smart Living Technologies. The project will enhance transportation for individuals with cognitive disabilities using the WayFinder Ecosystem. WayFinder operates on iOS and Android mobile devices and uses GPS and personalized visual, audio, and vibration prompts to allow individuals with cognitive disabilities to be able to use fixed-route public transportation independently.

The second winner is a $50,000 pilot proposal from local organization The Learning Tree. The proposal is receiving $25,000 of City:One Challenge funding with an additional $25,000 in matching funds from Central Indiana Community Foundation (CICF). The Learning Tree’s “Knowledge = The Power of Mobility” proposal will work with non-traditional transportation providers to collect baseline data regarding the challenges for low-income communities to access transportation to cultural and recreational activities in Indianapolis. That data will then be used to increase information about existing transportation options and to create additional means of getting around the city.

In addition to the two projects selected to win the Challenge, IndyGo worked in partnership with the CICF to fund two additional proposals.

“In speaking to my board, I stressed that this project could be the first community-based microtransit project in the country,” Evans says. “So we decided to buy four vans that we leased to the center. They are using our software and call center, and we own the data. Really, we’re helping them with their business plan, and we can hopefully replicate this model within other community pockets around the city.”

In addition, IndyGo will also work with Briometrix, a dedicated wheelchair fitness app, on its “City on Wheels” proposal to digitally map and assess the health and integrity of 61 miles of sidewalk infrastructure along the Red Line. The pilot will employ residents who use wheelchairs outfitted with various technologies to map all aspects of the sidewalks. These findings will be used in the development of pedestrian infrastructure along the Purple and Blue Lines.

The agency is also working on a mobile app that will integrate with bike-shares, scooters, and other alternative modes of mobility, including Lyft and Uber.

“Too often we in the bus business think that we have to put a 40-foot bus everywhere to meet the needs of everybody and that’s not true,” explains Evans. “If you think of it from the perspective that our role here is to move people, you constantly have to think about ways to do that.”