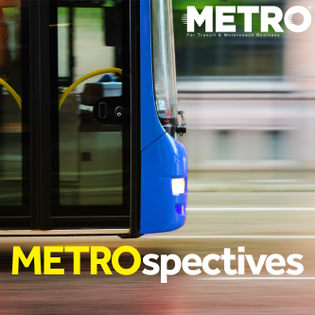 Retiring Greater Dayton RTA CEO Mark Donaghy joins METRO’s Alex Roman to discuss his 45 years in the industry, the important role public transit plays in providing equity in communities across the nation, and his unique tie to desegregation in Omaha, Nebraska. He also discusses his greatest achievements in the industry, how transit has changed in his 45 years, and his post-retirement plans.

Can transit go zero-emissions by 2035? With Dan Raudebaugh, executive director of CTE

Dan Raudebaugh of the Center for Transportation and the Environment joins METROspectives to discuss their zero emission analysis, how it was put together, and what some of the challenges of transitioning may be.

The Long Haul Ahead for Intercity Bus Operators with Joseph Schwieterman

Learn about the Chaddick Institute for Metropolitan Development's annual report of the scheduled motorcoach sector, Greyhound's decision to cease Canadian operations, and what the future holds for traditional major players in the market.

BRT, the Pandemic's Impact on Teamwork, and More with EMBARK's Jason Ferbrache and Jesse Rush

Learn how Oklahoma City's EMBARK are implementing initiatives such as an eight-mile, 32-stop BRT line, as well as how they view mobility post-pandemic.