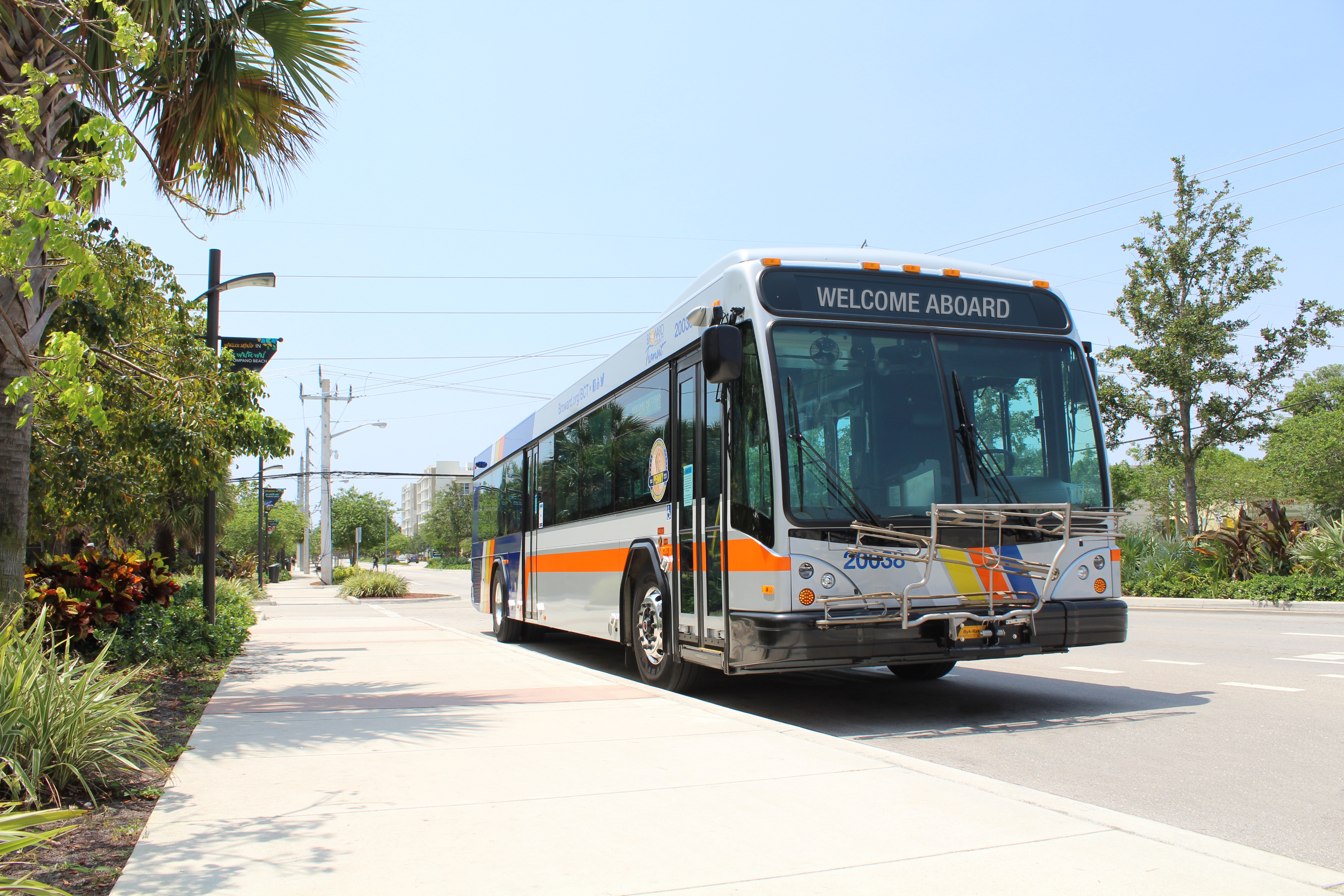 To kick off its rebrand, BCT recently added the first of 147 new GILLIG buses with a fresh design. All photos courtesy Broward County Transit

Although nobody in the transit industry could possibly plan for the coronavirus pandemic, Fla.’s Broward County Transit (BCT) at least had some experience to draw on when its services began to be impacted by the state’s stay at home order.

“There obviously isn’t a specific playbook for a pandemic, but we are used to having hurricanes here,” explains BCT’s Director of Transportation Chris Walton. “And, when we do have hurricanes that impact our area, we must shut down service. Sometimes, we also must bring that service back gradually, so we have experience running modified service schedules until full service can be restored. So, from that standpoint, we have experience in planning and operating under somewhat similar conditions, however, the safety issues make this an altogether different dynamic.”

As of press time, BCT is running what Walton calls a “modified Saturday schedule,” which means the agency is running on its typical Saturday schedule but adding service on some of the routes that have higher weekday ridership. The agency, like almost all its peers throughout the nation, also eliminated fares, switched to back-door entry and exit, allows only 50% passenger loads, and is following the CDC’s recommendations for keeping its operators and passengers safe during the pandemic.

“In addition, buses are disinfected each night and cleaned periodically throughout the day. Passengers are required to wear face coverings. We’ve gradually been able to acquire all the personal protective equipment we need such as masks, gloves, face shields, hand sanitizer, and disinfecting wipes,” says Walton. “We’ve also ordered plastic curtains that hang from the ceiling to the floor at the standee line as an additional protective barrier for our operators.

Revamping Services
In 2018, the region passed a one-cent sales tax to fund the county’s entire transportation network, focusing not only on public transit, but also road improvements, traffic synchronization and signalization improvements, intersection improvements, lighting, bikeways, greenways, and resiliency, which as Walton explained earlier is a big issue in South Florida.

The successful ballot measure, which will raise $15.6 billion dollars, comes after two earlier defeats at the ballot box in 2006 and 2016. In 2016, a measure made the ballot box that was asking for a half-cent sales tax to fund public transportation, which was tied to another measure asking for a half-cent tax to fund infrastructure throughout the 31 cities that make up Broward County.

“Politically, it was decided the two would be tied together, so if one measure failed, they both failed,” explains Walton. “When the vote was counted, the transportation referendum passed but the infrastructure referendum failed, so they both went down.”

Walton adds that after 2016, BCT knew there was a growing recognition for the value of public transportation in the region, which correlated with a growth in population and employment, as well as the further growth that is predicted in the short and long-term future. That initial growth, he says, was beginning to bring the type of traffic congestion you often see in highly populated cities throughout the nation.

“Our region will continue to grow because South Florida is a very desirable area to live in.” says Walton. “Our elected officials, as well the general public, recognized that if we didn’t do something now, we were fast approaching the point where we would have gridlock. So we knew we needed a more efficient way to move throughout our region and decided to go back to the ballot box in 2018.”

Because the need for a broader, efficient transportation system in the area was already recognized, the messaging in 2018 didn’t necessarily change when a measure asking for a one-cent sales tax to fund transportation hit the ballot box.

What did change was the creation of an interactive website, called “Penny for Transportation,” that outlined the agency’s 30-year plan for a more robust bus system, which will also includes bus rapid transit and the introduction of a new light rail system on some of the region’s busiest corridors. In addition, there was a strong coalition of community, business, labor and faith-based support.

“The website, which was an effective tool for us and is still active today, identified all the transit and road improvements and other projects we plan to build with the monies from this referendum,” Walton says. “It also gives the costs for the projects and the timeframes planned for completion, so that our residents could see what projects were going to happen in their communities and when they are scheduled to happen.”

County staff is currently working on a collaborative five-year plan due July 1 to the Independent Transportation Surtax Oversight Board and the Broward County Board of County Commissioners for approval. The plan will include public engagement opportunities around large projects.

In addition, roadway improvements such as fiber optic installations, traffic signal upgrades and synchronization, lighting and drainage projects, plus numerous transportation-related studies, Broward County Transit service enhancements, and data and technology research for transportation technologies for the future are in full swing.

“I’ve been in transit for a long time and cannot overstate the sacrifice our transit workers are making to keep our people and economy moving, while still being at risk themselves. I’ve worked in environments where we’ve had snowstorms and I work where we have hurricanes, and in every case, the transportation workers have stepped up to the challenge and really made us all proud. Because of that, I’d like to give a tip of the cap to our transportation workers here in Broward and all over the entire country, who continue to provide this critical service during unprecedented times. We’re in tough times now, but things could be a lot tougher if we didn’t have the commitment and dedication that we see from our transit workers in this country every day.”

Rebrand, refueling fleet
The agency also recently kicked off a new rebranding effort to signify the new day that is dawning for public transportation in Broward County.

“In terms of the rebranding, we wanted to signify that it’s a new day for transit in the County because we now have the resources to build, what I like to tell my staff and everyone, the best transit system in the nation,” says Walton.

Kicking off that rebrand, BCT recently added the first of 147 new GILLIG buses with a fresh design, featuring BCT’s signature silver and royal blue colors overlaid with three diagonal stripes in bright orange, yellow, and white on the rear sides of the bus. There is also a prominent orange stripe that runs horizontally along the sides of the bus. The colors are representative of the colors in the County’s logo.

“The buses are in production now, and we’ve received the first 40,” Walton says. “But, like many facilities in the country, production has been shut down. As soon as production can begin again, we will see the balance of our order.”

With an eye on a sustainable future, BCT has also tested both battery-electric and hydrogen fuel-cell buses.

Walton explains that last summer, the agency brought in buses from all the major manufacturers and put them into revenue service for 30 days, giving the agency’s engineering team an opportunity to evaluate how each system performed while allowing BCT’s maintenance crew a chance to look at the maintainability of each vehicle.

“The testing gave us a chance to do a lot of comparisons since we ran them all on the same routes during the hottest part of the year.” Walton says. “Through the testing, we were able to evaluate what the impact of running the buses during the summer had on air conditioning and how fully loaded buses impacted the state of charge throughout the service day. Because of our flash summer rains, we were able to evaluate operations in the wet conditions, where very valuable lessons were learned.  Overall, we were able to gather a lot of information on how battery-electric buses would work in our environment.”

BCT is using the research to inform its decision on which supplier they’d like to move forward with at this time, with Walton adding an announcement will be made soon.

“We are excited about bringing the electric buses in and are partnering with our local utilities, in terms of bringing power and charging technologies. Construction on the infrastructure has begun, and the plan is to place an order very soon,” he says.

Like many other transit agencies, Walton explains that BCT is simply dipping its toe in the water regarding battery-electric buses at this point. But, as the technology continues to mature, BCT will eventually transition its entire fleet from clean diesel to electric.

For now, though, the agency, like the rest of us, is simply waiting for conditions to improve so things can start to get back to normal after the COVID-19 pandemic, whatever that may end up looking like.

“We know our ridership will come back, it’s really a question of how quickly that will happen,” says Walton. “I think the answer to that question will certainly depend on how quickly the economy comes back, since most of our riders are going to work and school. The pandemic has introduced several new variables into our ridership equation such as some passengers working from home or on modified work schedules. We are preparing multiple scenarios so that as ridership does come back, we can implement the service that will be necessary to provide the appropriate level of transportation to our residents and visitors.”