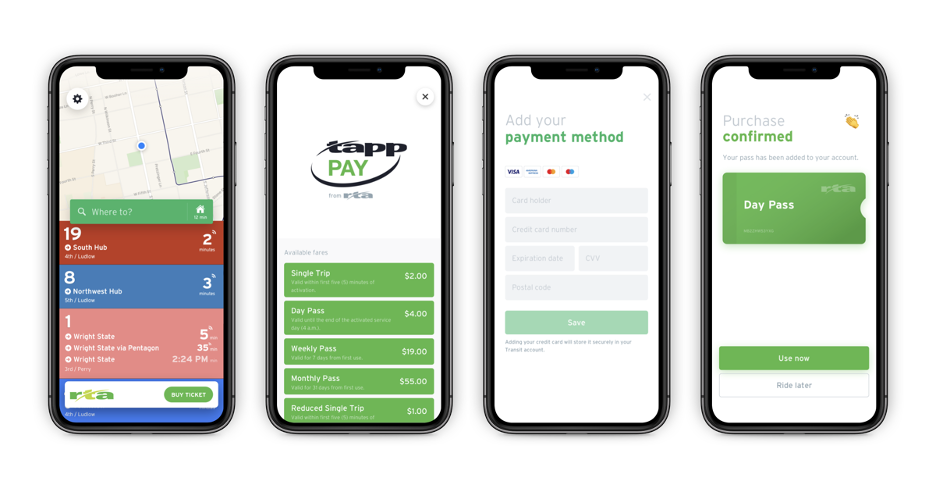 The RTA joins more than a dozen other agencies offering mobile ticketing through partnerships with Transit and Masabi, including those in Cincinnati, Butler County, and Northern Kentucky. Masabi

The Greater Dayton RTA is launching Tapp Pay — its new mobile fare payment system, which integrates seamlessly with the RTA’s official, free real-time information, and trip planning mobile application, Transit, to allow customers to purchase and use bus fare with their mobile devices.

The RTA said it is excited to expand its partnership with Transit, which thousands of its customers already use for trip planning, tracking rides, and making multimodal connections, while bringing in new partner Masabi, a fare payments-as-a-service provider, to further simplify the riding experience.

The launch further expands upon the RTA’s efforts to keep both passengers and employees safe during the COVID-19 outbreak. Tapp Pay’s launch is coming ahead of its expected summer launch to assist passengers with their social distancing efforts as those making essential trips can purchase both regular and reduced-fare passes using Transit without interacting with anyone else and store them in a wallet inside the app for later use. Once they are ready to board, passes can be activated and visually validated by the bus driver from a safe distance, which also speeds up the boarding process and limits issues at the fare box, RTA officials said.

The RTA joins more than a dozen other agencies offering mobile ticketing through partnerships with Transit and Masabi, including those in Cincinnati, Butler County, and Northern Kentucky.

Mobile ticketing in Transit is made possible through Masabi’s Justride SDK, which allows Transit to request fare types, make payments, and deliver visual and dynamic barcode tickets to riders through secure ticket wallets. With the launch of Tapp Pay, the RTA gains access to the Justride Hub, giving it real-time sales, usage, and validation data as well as an extensive customer services interface.