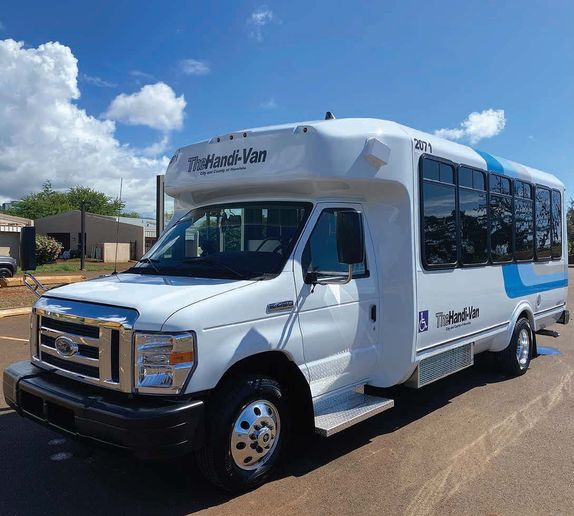 TheBus, operated by Oahu Transit Services in Hawaii, knows all about rough roads. The busy island of Oahu features steep, winding paths which often give way to roads affected by the tropical climate and heavy rainfall. For some passengers, ride quality can mean the difference between utilizing paratransit services or not.

Since 2017, the agency has partnered with LiquidSpring to provide smoother rides for passengers and improved handling. TheBus’s paratransit operation operates 191 cutaway vehicles (largely servicing Honolulu County passengers who are unable to use fixed-route services). Today, 117 of the agency’s cutaways feature the CLASS suspension system by LiquidSpring.

“Our director of maintenance, Herb Barboza, reached out to LiquidSpring in 2017 through our distributor Soderholm Bus & Mobility,” said Spencer Louie, superintendent of maintenance for Oahu Transit Services’ paratransit operations. “He had heard good things about the suspension from contacts in San Diego.”

Soderholm Bus & Mobility is the top bus distributor in the Pacific Islands. In business for more than 35 years, Soderholm has sold more than 600 buses to Honolulu County.

R. Erik Soderholm, founder and vice president of Solderholm Bus & Mobility, said he was unfamiliar with LiquidSpring at the time but was happy to include it in TheBus’s next bus order.

“We had experience with all sorts of air-spring and rubber-spring suspensions, but this system was new to us,” Soderholm said. “We put the LiquidSpring suspension on an initial order of 25 buses, and it was very well received. So, we began to learn more about the system and what makes it unique.”

“We produce an active suspension system that utilizes a compressible fluid as the spring element,” said David Nagreski, director of advanced engineering for LiquidSpring. “By varying the amount of fluid that is engaged, we can change the spring rate and pulse between two ride types – softer than standard or stiffer if the route requires more control. We like to say that it provides a ‘luxury car’ ride with ‘sports car’ handling, but in a bus.”

The system differs from leaf-spring suspensions, where Nagreski said buses sacrifice ride in favor of handling, and air suspensions which he said offer a smoother ride but handle more poorly. Unlike an air-ride suspension, the CLASS suspension has no air bags or lines which need to be monitored. The suspension’s hydraulic systems should be monitored, but no refills or system replacements are typically required in a vehicle’s lifetime.

“My experience before LiquidSpring was primarily with air-ride suspensions,” Louie said. “Riding in the back of a LiquidSpring-equipped cutaway shows a night-and-day difference in terms of ride quality. The system is constantly adjusting, and it presents a totally different feel from the rougher rides of air-ride or leaf-spring suspensions.”

In areas with poorer road conditions, the LiquidSpring suspension may offer even more maintenance savings over other suspensions. “We have found that this suspension technology reduces 45 percent of vibrations from road to bus,” said Travis Ward, national bus sales at LiquidSpring. “Many maintenance issues – such as air conditioning, body panels, airbags, compressors, dryers, moisture separators, and more – are no longer a problem because of vibration reduction.”

Louie said when the first batch of LiquidSpring-equipped vehicles rolled out to the Oahu ridership, the agency immediately received commendations from customers. The community had been advocating for smoother rides for some time, which made the TheBus officials confident in their selection.

“Since we selected LiquidSpring, we continue to do our due diligence and review other systems coming on to the market,” Louie said. “Even so – when we test new systems against our own, the ride quality is not even close. Our passengers have become accustomed to the rides provided by the self-adjusting suspension, and so we would need to see a real, substantial difference in quality before switching to another provider.”

Hawaii has four major island groups and four major transit agencies, and Soderholm said that the CLASS suspension by LiquidSpring is beginning to turn heads across the state.

“That is what happens in Hawaii – other agencies see the system, hear about the smooth rides and handling, and they want to see it for themselves,” Soderhom said. “We will be distributing these systems in other counties soon, and even more agencies are testing them now.”

Soderholm said that LiquidSpring has backed up the product beyond warranty, with Soderholm Bus & Mobility acting as the service and warranty center for Hawaii.

“We recommend many products to our transit customers, based on what we see working across the industry,” he said. “But in this instance, our customer found it first – and we are happy to support it. The county has stayed with LiquidSpring because it has truly been the best product for passengers and drivers.”