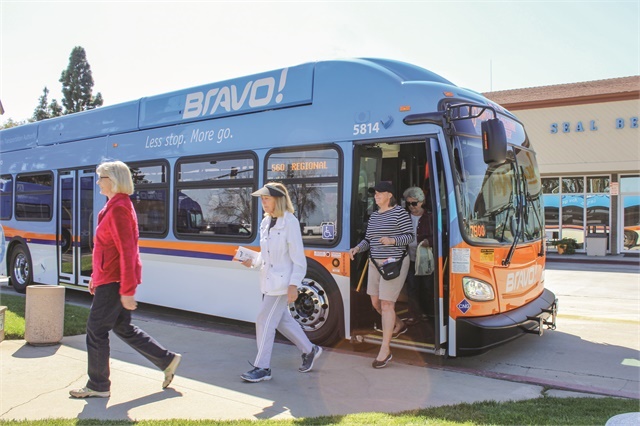 The pilot program for the 10 plug-in battery electric 40-foot buses comes in the wake of OCTA’s debut earlier this year of 10 new hydrogen fuel-cell electric buses.

Those hydrogen fuel-cell buses, which also create zero emissions, began operating in January, when OCTA debuted the nation’s largest hydrogen fueling station at its Santa Ana base. In all, it represented a $22.9 million investment. More than half of that funding — $12.5 million — came from California Climate Investments, a statewide initiative that puts billions of cap-and-trade dollars to work reducing greenhouse gas emissions, strengthening the economy and improving public health and the environment — particularly in disadvantaged communities.

Testing both hydrogen fuel cell and plug-in battery electric buses will allow OCTA to collect valuable data on how the buses perform on Orange County streets and to determine which technology — or the best mix of technologies — to pursue moving forward.

OCTA operates more than 500 buses in the regular OC Bus system across Orange County. For now, most of those buses run on clean-burning compressed natural gas. But OCTA is working toward a goal of producing zero emissions while operating its buses.

Funds for the purchase of the 10 plug-in battery electric buses are included in the 2020-21 fiscal-year budget, expected to be considered by the OCTA board in June.

Requests for quotes are due this summer. The plug-in battery electric buses are expected to begin operation in Orange County in late 2021.