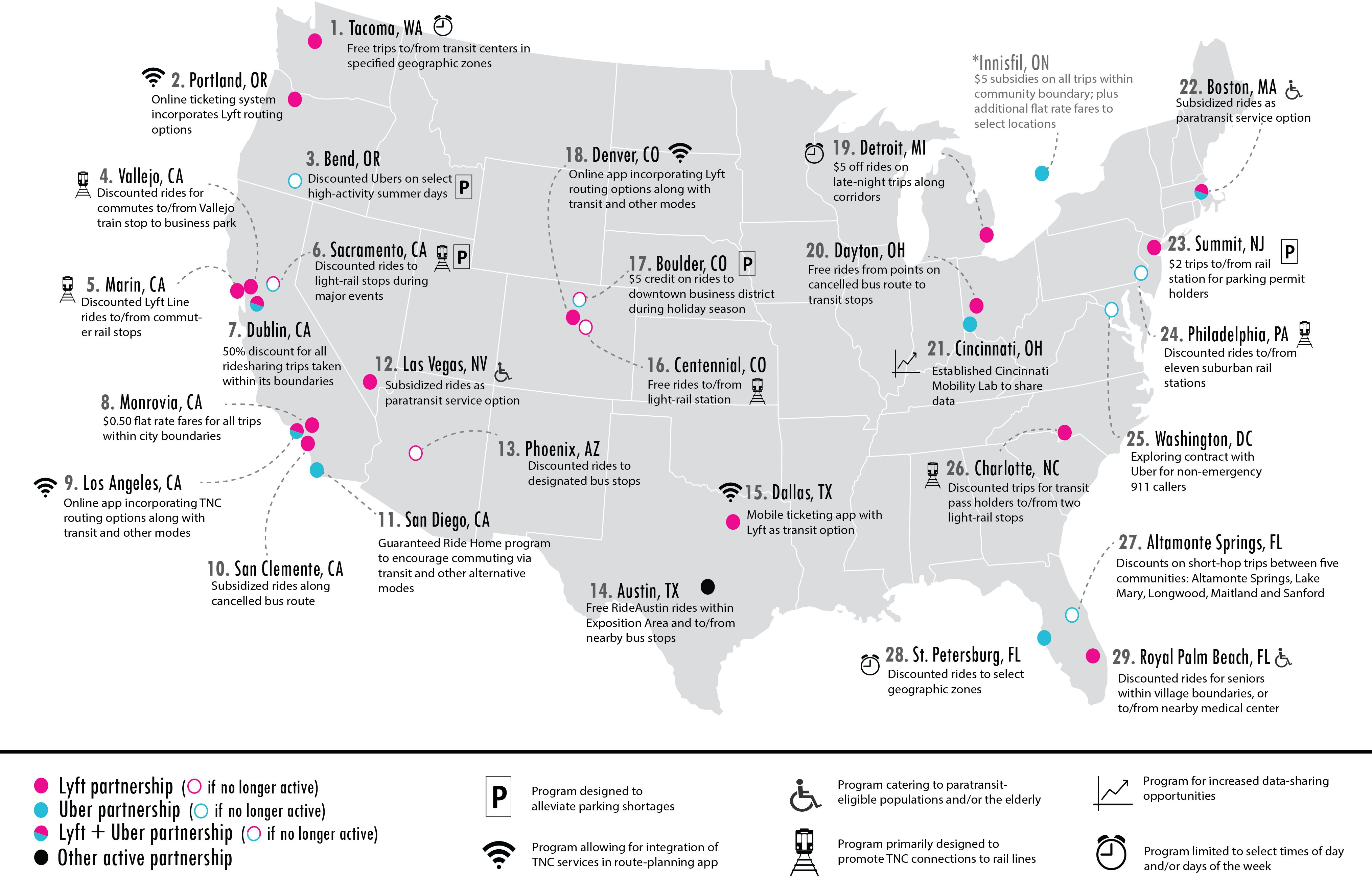 Transit agencies and transportation network companies (TNCs) generally play in different sandboxes, managing their operations without the complications of working together. But, in a growing number of cities, these service providers have found the allure of collaborating too powerful to resist. More than two dozen municipal governments and transit agencies have formed partnerships with TNCs to enhance mobility options.

Nearly all of the 29 past and present collaborations we explore in our new study, “Partners in Transit: A Review of Partnerships between Transportation Network Companies and Public Agencies,” are intended to allow transit operators and TNCs (predominately Lyft and Uber) to concentrate on what they do best. By using TNCs to fill gaps, offer first- and last-mile solutions, and provide certain demand-responsive services, transit providers can focus resources on modernizing top-performing routes, serving commuters, and other core strengths.

This strategy can be risky, but is backed by research showing that travelers tend to use ride-sharing and transit in different ways, which means both modes can complement each other in many situations. The elephant in the room, heralded by new lower-priced services such as Lyft Line and UberPool, is heightened competition between them. This can render partnerships awkward and short-lived, marred by mistrust. Nonetheless, many transit officials are reluctant to stand back and watch technological advances buffet their ridership and financial goals. In the minds of many, outside-the-box thinking is imperative.

A variety of secondary motives are also at play. Some agencies tout partnerships as a way to bolster the “brand image” of transit, give their staffs new analytical tools, or address budgetary shortfalls. The promise of promoting economic development and alleviating parking shortages are also motivators, particularly when city hall gets involved.

Most Prominent Partnerships
The media spotlight tends to shine brightest on partnerships that provide all travelers free or discounted ride-sharing trips within a community. Monrovia, Calif.’s partnership with Lyft is one case, subsidizing Lyft rides so that all trips starting and ending within its boundaries cost just $.50 cents. This city of 37,000, which has a contiguous boundary with Pasadena, is not only facing significant employment growth, but has long-harbored concerns about the performance of its dial-a-ride program. Since the program’s introduction in March of 2018, more than 53,000 trips have been taken at this ultra-low rate.

In the San Francisco Bay Area, Dublin, Calif., offers across-the-board 50% discounts of up to $5 on all Uber and Lyft trips within its boundaries, including those shuttling to its Bay Area Rapid Transit station. Across the Canadian border, Innsifil, Ontario — reportedly Uber’s first program in that country — boasts a similar program and has generated an outsized amount of publicity.

Perhaps the most heavily publicized in the U.S. is the Altamonte Springs, Lake Mary, Longwood, Maitland, and Sanford, Fla., initiative, which until recently offered 20% discounts on trips between and within their municipal boundaries. This five-city cluster of around 150,000 residents came together to provide transportation at a lower cost than providing fixed-route bus services would have been. Although the program ended in July, an autumn rollout of a new collaborative initiative is being explored.

The fact that no large cities have contemplated such ambitious programs is hardly a surprise: subsidizing TNC rides can be costly and risks cannibalizing transit markets. Indeed, the creators of these programs need to be careful what they wish for: generous subsidy programs can rocket passed projected ridership targets, creating unexpected budgetary challenges. But a notable “plus” is their relatively simple administration: TNCs deliver rides at below-market rates and send the sponsoring public agency the bill, with volume tracked by measuring the number of trips taken with a particular discount code.

Certain Restrictions Apply
Vexing political and budgetary issues often require focusing incentives on particular routes or areas. Dayton, Ohio’s program, administered by its Regional Transportation Authority, stands out as being well-designed in this regard, having been created largely to deal with reductions in bus service. Users enjoy free Lyft rides between several hundred bus stops along certain corridors, and are reminded of the service by signage at bus stops.

A similar program in San Clemente, Calif., created in response to bus service cutbacks, allows trips between designated stops for just $2. The city covers the remaining cost, up to $9. In the Bay Area, the transportation authority in Marin County, Calif., meanwhile, limits Lyft discounts to trips involving its five Sonoma-Martin Area Rail Transit (SMART) stations, including downtown San Raphael. SMART, launched in 2017, is one of the country’s newest commuter rail lines.

Considering Austin, Texas’ famous pushback against Uber a few years ago, it seems appropriate that its program involves RideAustin, a homegrown TNC. Riders receive free trips within its Exposition Area, which has many technology jobs, as well as those to/from nearby Capital Metro bus stops. Charlotte, N.C., has improved access to its Lynx light-rail system by offering discounted Lyft rides to/from a pair of stations — but only for trips that start or end within certain areas for those with a valid transit pass. Summit, N.J., provides $2 weekday Lyft rides to/from its New Jersey Transit commuter rail station, but only to residents who have paid for a parking permit at the station. The benefit: avoiding the cost of building a new parking lot.

A variety of initiatives, set up as pilots, have been discontinued. Centennial, Colo.’s free trips to its light-rail station, offered through 2017, was distinguished for having an exemplary performance audit. Phoenix also had a large-scale program, which ended in April.

In metropolitan Philadelphia, the Southeastern Pennsylvania Transportation Authority had similar goals, and offered Uber discounts up to 40% for those traveling to/from 11 commuter rail stations — mostly locations with little feeder bus service and chronic parking shortages. The pilot was not renewed last October, partially due to concerns over the need for better performance evaluation data.
Some programs are designed to ameliorate the deluge of private vehicles arriving at evening events. Bend, Ore., and Boulder, Colo., experimented with subsidized ride-sharing to alleviate parking shortages during seasonal events and peak shopping times, respectively, while Sacramento, Calif., subsidized rides to designated light-rail stations for events at the local arena. Neither, though, is presently active.


Targeted Programs
Not all agencies are willing to offer discounts for all passengers heading a certain way. Several programs target their incentives for workers on overnight shifts. Detroit recently began offering $7 price reductions on Lyft trips to/from the 53 Woodward bus route on weekdays between midnight and 5 a.m. The Pinellas Suncoast Transit Authority gives low-income residents in the St. Petersburg, Fla., area free Uber rides between 9 p.m. and 6 a.m. Qualifying residents can take 25 ride-shares at no cost each month, if they have a valid bus pass. In the Tacoma, Wash., area, Pierce Transit provides Lyft discounts to/from select geographic zones, with designated days and times when each discount is valid.

If more large cities and transit systems give partnerships a try, it seems they will likely side-step thorny issues about “subsidizing the competition” and limit discounts to people with physical mobility challenges. The Massachusetts Bay Transportation Authority’s pilot program with Lyft and Uber gives all Boston area residents who are eligible to use alternatives to MBTA service (e.g., seniors and the disabled) a limited number of subsidized ride-sharing trips per month. Users typically pay the first $2 and any amount above $42, although arrangements vary by service, and no discounts are offered on airport trips. Apart from the bargain price, riders enjoy faster pick-ups than with The Ride — the existing paratransit service.

Las Vegas provides subsidized Lyft rides to paratransit-eligible riders, who pay a flat $3, while the city covers the rest (up to $15). Elsewhere, public bodies are forging partnerships with microtransit operators, such as Chariot and Via Mobility Services, which tend to operate larger vehicles. These are not considered in our report but are often designed in similar ways.

We need an App for That
Transit agencies uncomfortable with subsidizing ride-sharing in any way can take an indirect approach by creating apps that encourage travelers using TNCs to make connections with traditional transit services. The Dallas Area Rapid Transit’s mobile ticketing app, “GoPass,” allows travelers to purchase public transit tickets and then connect to the Lyft app with the push of a button. Portland, Ore.’s TriMet is fully integrating Lyft into the city’s “RideTap” system, giving riders real-time access to information about both public transit and Lyft transportation offerings on a single app.

Los Angeles and Denver have partnered with Xerox to develop smartphone apps that include a wide-array of travel options, including TNCs and public transit, to increase mobility. These apps even consider the traveler’s personalized priorities, such as preferences regarding total carbon emissions, walking speed, and how the user values travel time.

What Lies Ahead?
By all indications, the next few months will help planners better understand which strategies among this smorgasbord of options are sustainable. Presently, only 11 of the 50 largest transit agencies in the U.S. have apparently made the plunge. If more choose to engage TNCs for partnerships, any subsidies provided will likely have multiple “strings attached,” due to the obvious problem that a poorly designed program could increase deficits at transit agencies and worsen roadway congestion.

Adding to this challenge, before many partnerships are created, more formal evaluations of existing programs will need to be carried out. Unfortunately, a lack of performance analysis creates the risk that mistakes will be repeated. TNCs will no doubt remain reluctant to share confidential data about where trips start and end — and unwilling to tinker with the dynamic pricing techniques.

Even without perfect data and predictable pricing, the preliminary evidence suggests that a properly designed program can be a bargain when compared to the cost of buying buses and paying for labor, fuel, and maintenance on lightly used routes. Particular excitement exists at the moment for incorporating payment for both ride-shares and transit — and connections between the two — on a single app. Breakthroughs appear imminent, once sensitive issues such as protecting private information and other hurdles can be crossed.

Regardless of what lies around the corner, the next evolution of TNC partnerships over the coming year will be fascinating to watch.

Joseph Schwieterman is Director of the Chaddick Institute for Metropolitan Development at DePaul University, where Mallory Livingston is Program Manager. Their study, is available at chaddick.depaul.edu.