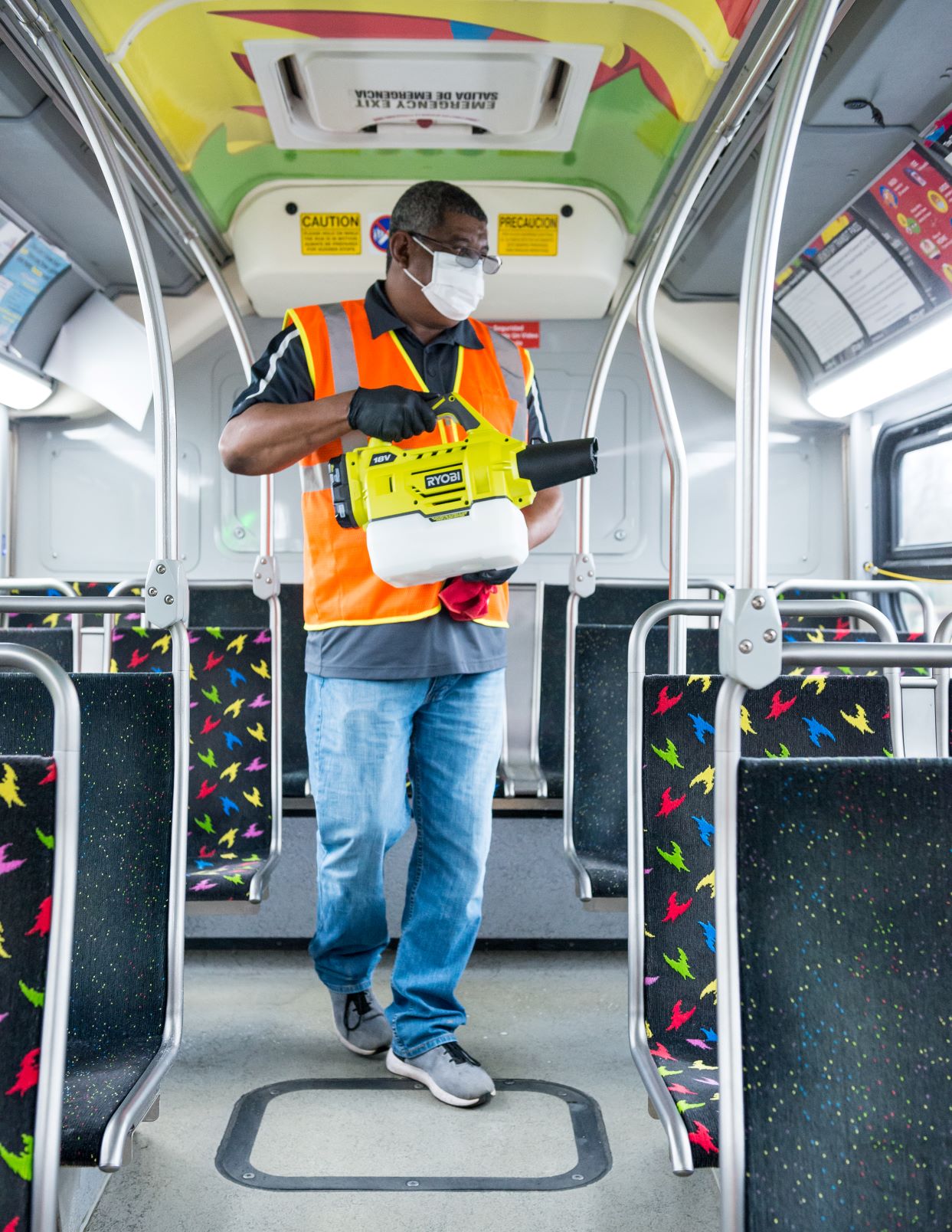 (Ed Note: Join Paul Comfort and METRO Magazine for a webinar, How COVID-19 Has Changed Public Transportation, on Friday, May 22 at 11 a.m. Pacific/2 p.m. Eastern. For more info, click here.)

Public Transportation has taken a hit from the coronavirus pandemic. Ridership was finally on an increase at the end of 2019 with transit agencies rebooting their bus route networks, adding frequency to key routes, and reducing the friction that slowed service down in central business districts by adding bus only lanes, transit signal priority, and easier faring options like tap and go credit cards and e-faring.

New trends, including agencies adding Mobility as a Service (MaaS) apps by aggregating all the mobility options in their region on one smartphone app for trip planning and payment, were taking hold and attracting choice riders. Many cities were piloting autonomous vehicles for specialized routes that were attracting attention both from the public and the media.

Then, March 2020 brought North America a global pandemic — causing governments around the world to restrict movement and require their citizens to work from home. Ridership has plummeted across the globe from 60% to 90% with commuter services taking the heaviest toll. Agencies are reeling from the impact on their farebox revenue, sales tax subsidy reductions, and the increased cost of dealing with virus spread prevention such as cleaning products, PPE, and sanitizing vehicles and stations.

Governments have worked fast to put together response plans. The U.S. included a massive stimulus package consisting of $25 billion for public transit agencies to respond to the pandemic and assist in the recovery from this loss of ridership. These funds represent the largest single infusion of cash ever from the federal government into public transportation and comprises 280% of the FY 2020 funding allocation.

What could the long-term implications be for public transit of this coronavirus pandemic?

1. Death of the Farebox
As a result of the social distancing requirements mandated by governments and to promote the safety and well-being of their bus operators and passengers, most major transit agencies moved away from front-door boarding of their buses to eliminate potential cross-contamination between the drivers and passengers at the farebox area. Passengers are required to board the bus from the rear door. Since there is usually no farebox and often no smart card validator there, many agencies have suspended fares or fare enforcement, negating the need for cash to ride the bus or train.

Several years ago, Transport for London (TfL) eliminated cash on their system. The popularity of their Oyster Card (multi-use smart card) and contactless credit cards for fare payment led to under 5% of riders using cash. Thus, the movement to cashless fares did not cause much of a ripple, according to Simon Reed, head of technology and data, surface transport, at TfL. This pandemic could spark a trend for other agencies to follow suit.

Now, having experience with no cash due to the coronavirus restrictions, North American transit systems could expect many to make this their new normal. Smart card validators are much simpler and less costly than fareboxes. And with the plethora of e-faring options now available, many systems can be expected to stop ordering new fareboxes, beginning a transition to cashless fares.

Title VI concerns in the U.S. can be resolved through smart card technology, allowing users to add value at ticket vending machines or at convenience stores with a point of sale apparatus. So, there appear to be no regulatory hurdles blocking a potential move toward eliminating fareboxes.

Additionally, some U.S. systems have been moving toward zero fares even prior to the coronavirus pandemic. Kansas City Area Transit Authority, under the leadership of CEO Robbie Makinen, received approval from their city council and Mayor to move in this direction in early 2020. Other systems like Intercity Transit in Olympia, Wash., began a five-year zero fare demonstration project that went into effect Jan. 1, 2020. Several mid-sized European cities, such as Tallinn, the capital city of Estonia with more than 420,000 inhabitants, and small towns around the world have converted their public transportation networks to zero-fare. Recently, Luxembourg became the first country in the world to make all public transport free.

Part of the rationale of moving away from fares and/or cash are the high cost associated with collecting, counting, and depositing fares along with the price of new fareboxes. Additionally, the time it takes to print day passes and other fare media at the farebox dramatically slows onboarding times. At the MTA in Baltimore, where I served as CEO it took 30 seconds to process the cash purchase of a day pass at the farebox, on average. Calculating total usage showed this one cash-based process caused more than 50,000 hours (annually) of productivity loss on the system as a whole and contributed to a slower than desired system efficiency as measured in average system miles per hour (MpH).

These two movements of cashless fares and zero fares are coalescing, leading many agencies to simply remove their fareboxes entirely or simply phase them out and not order any new ones.

2. All-door Boarding
One of the major benefits derived from this movement of eliminating fareboxes is the ability to begin all-door boarding of buses. The requirement for all passengers to queue at the front door of the bus to pay their fare slows the passenger pick up process dramatically and the overall system productivity (MpH).

Bus rapid transit, light rail, and subway systems have taken advantage of all-door boarding for many years. All these modes allow for off-board fare payment with no farebox involved. They move very quickly away from their stops compared to buses, which linger until all passengers pay the fare at the front door and then move pass the standee line.

One of the major complaints from passengers who use public bus transportation is how inefficient it is, often taking longer by bus in congested central business districts during rush hour than walking. Some cities are addressing this by adding bus-only lanes and transit signal priority.

Adding the potential of eliminating farebox payments to the mix of friction-reducing solutions, will prove a powerful elixir in making bus transportation even speedier and more efficient, and help attract riders back to the bus after this pandemic passes.

3. Reduced Ridership on commuter  bus and trains
Ridership on commuter train services and buses has taken the biggest hit of all the modes. Many systems like Long Island Rail Road have reported drops of 90% in ridership during this pandemic due to commuters working from home. The boom in the effective usage of Zoom and other tele meeting software solutions has sparked the realization among company leaders that much of their work can be done from home, and often as efficiently as when they were working from the office.

You can expect many companies and their white-collar employees to continue working from home more often, even when the “all-clear” is given for offices to open back up. Some companies that did not provide this telecommute option for their employees have already indicated they plan to extend this new work-from-home approach. Others will aggressively promote it to reduce office space requirements and perhaps allow for a healthier lifestyle/work-life balance.

All this will impact commuter transit services, which were the highest growing ridership facet of public transportation coming out of 2019 with APTA’s ridership statistics. It showed a 4.38% increase in commuter rail ridership compared to a 0.59% increase for regular bus service in the third quarter of 2019 vs. 2018.

There may also be a residual concern among these office worker passengers about germs on public transit. Many commuter systems seats are full, requiring passengers to stand while holding stanchions and overhead grab rails and be in close physical proximity to other passengers. Lingering health care messaging about hard surfaces being a primary point of contagion and maintaining social distancing practices may become hard-wired into these passengers’ day-to-day thinking. They may be reticent to come back to this “face-to-face” mode of transit when other options like telecommuting and driving their car with lower gas prices are available.

4. Cleaner Vehicles or Fewer Passengers
The overall lingering impact on public transit may be a slow return of riders. Transit agencies must aggressively maintain clean vehicles and begin messaging this approach to the public. High-touch activities such as boarding and riding a bus will need to be reevaluated and re-messaged to allow passengers to feel safe from germs and possible contagion. Hearing Mayors and Governors warn people not to take public transportation during the pandemic will need to be counter-messaged afterward, and clean, safe, efficient transit may be the antidote.

Transit systems utilizing heightened cleaning procedures such as using medical-grade solvents and full cleaning of the interiors of the bus more regularly than once a night may need to continue these practices. Even reducing capacity on buses to maintain social distancing may need to continue for a time to attract choice riders back to the system.

5. Increased Federal Funding for Transit
The most impactful realization of the coronavirus pandemic may be the understanding of federal lawmakers and state and local elected officials that public transportation really is an essential service. Those viewing it as a social program or low-income offering now see transit provides access to jobs for frontline workers, which society and the economy rely upon. The third U.S. federal stimulus package (mentioned above) is the most Washington has ever provided in a single year to public transit agencies.

Now, this could become the benchmark, or new norm, as Congress begins to consider even more investment in transit through a new infrastructure funding package. The U.S. may have finally crossed the Rubicon to see public transportation as a federal priority, as most European and Asian nations do.

Federal funding in both the U.S. and Canada can also be expected to remain higher than normal as ridership levels may be slow to recover with the resulting operating expense deficits seen as a federal responsibility.

There will be other lasting impacts of this coronavirus pandemic on public transit operational practices and our image. Pulling together and continuing to share best practices will be more important now than ever.

Paul Comfort is host of the Transit Unplugged podcast, VP, Business Development, for Trapeze Group, and author of the bestselling book,
The Future of Public Transportation (available now on Amazon).