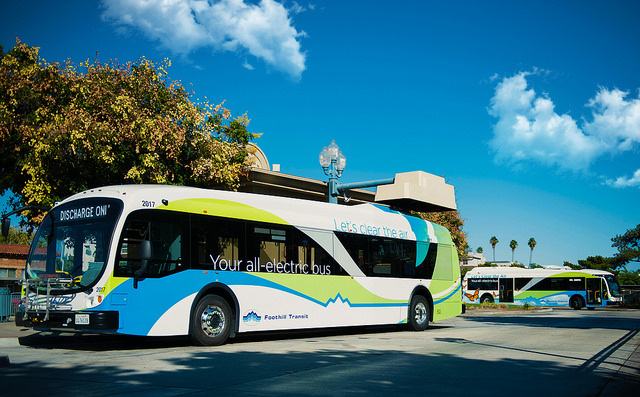 By 2030, California expects to have five million zero-emission vehicles on the road. Foothill Transit

When history looks back on the 2010-2020 decade, it's likely to view it as the start of the electric heckle boom. In 2019 alone, company and municipal vehicles rose 66%.

By 2030, California expects to have five million zero-emission vehicles on the road. This directive also sets a statewide goal for public transit agencies to transition to 100% zero-emission bus fleets by 2040. The regulation is part of the state's grander vision to decarbonize the broader transportation sector, which accounts for 40% of greenhouse gas emissions and 80% to 90% of smog-forming pollutants.

Already we see other states and cities at the forefront of electrifying public transportation. Bloomberg New Energy Finance reports there are roughly 650 e-buses on U.S. roads today — more than double the 300 it counted last year. Based on current pledges by states, cities, and urban transit agencies, the nation's public transit buses are on track to be at least 30% electric — approximately 21,000 — by 2045, that's according to a report from the U.S. Public Interest Research Group (U.S. PIRG).

Maryland is directing all school buses to be electric by 2022. Meanwhile, Massachusetts' goal is to have 300,000 EVs on roadways by 2025, with plans to introduce more EV fleets for public vehicles. By 2035, Los Angeles pledged to shift to all-electric public buses and pledged to electrify its garbage truck fleets. Smaller cities are also getting in on electrification with regions like Wichita, Kan.; Portland, Maine; Gulfport, Miss.; and others securing grant funding for their first electric bus purchases.

The goals these states and cities have set is only the beginning. Expect this trend to continue over the next decade as school districts and municipal pilot programs transform into full deployments and statewide policies to push the transition as battery prices drop, and organizations realize cost savings related to fueling and maintenance.

Advancements in modeling, tracking for fleets

Since electric bus demand is outpacing production, it's only a matter of time before we begin seeing growth in software that allows municipal fleet operators more visibility in routing and cost savings in their EVs. Managing an electric fleet can be quite different from operating one based on liquid fuels. Fleet managers have to track routing and ensure vehicles are charged, as well as track the time-of-use to ensure they are not overpaying for electricity during peak times when electricity demand is high.

While there are companies that offer platforms that allow this type of visibility today, by 2030, expect fleet operations to go even deeper, especially when it comes to real-time monitoring and automation. The software will model depots and track trends, such as real-time charge and schedule tracking, and fuel cost per time period, maintenance schedules, charge order, and more. These automated tools will save operators time and allow them to reinvest in areas such as driver training. This will be especially helpful for city-run organizations to stay within budget while also increasing their efforts to decarbonize public transportation.

For electric transportation to scale, the entire ecosystem needs to speak the same language. Today, there is little unification in terminology, metrics, and reporting. Dollar-per-gallon, dollar-per-mile-driven, and dollar-per-mile and per-pound are all common metrics traditional diesel fleets use now. However, if cities and states are to meet their goals by 2030 and beyond, the industry must adopt universal metrics that everyone can use to track benchmark success.

An example of this is the Dollar-Per-Gallon-Equivalent (DPGe), developed by AMPLY Power. It's one effort to provide operators with an apples-to-apples cost comparison for diesel vs. electric fleets and an example of how to establish methods for making the comparison of fueling and charging costs simpler and more straight. As fleets continue to mainstream electric vehicles into their operations, expect to see the industry continue to make advancements towards standardization surrounding measurements and metrics.

Many utility companies recognize that the transition to electric transportation is inevitable. In response, many are beginning to offer end-to-end charging management services to those looking to electrify their public fleets.

In California, San Diego Gas & Electric is working with the Port of San Diego to install chargers for electric medium-duty and heavy-duty vehicles, as well as forklifts. Dominion Energy is partnering with Virginia school districts to utilize electric school buses. Similarly, Austin Energy partnered with a school district to install chargers and add an EV education component for students.

When utilities support electric transport efforts with charging solutions and third-party services, it dispels the mystery, removing the complexity that many operators feel when making the transition to electric.

By 2030, expect the majority of large utilities in large population centers to have an electrification strategy at the very least, with the savviest players offering a variety of incentives or even in-house charging services.

As more cities plan for electric buses, it's only a matter of time before our communities are filled with more electric public transport, charging stations, and other emerging technology. Transportation demand management (TDM) plays a crucial role in the strategy of both commercial and municipal electric vehicle fleets and how they interact with the broader smart city strategy. The challenge for city planners and employers is how to optimize electric vehicles offering a public or city service to ensure citizens use new technology and options in safe and sustainable ways. While smart mobility often relies on technology, it is critical to develop and implement thoughtful programs and policies to support it.

It's the promise of autonomous vehicles and e-mobility that they will lead to safer roads and more efficient use of energy resources. However, they might also require new forms of maintenance, fueling and servicing, and regulations.

As we watch the demand and implementation of EV fleets grow, it's encouraging to know that it's only the beginning of a more abundant and cleaner future. We look forward to watching continued growth in EVs and surrounding technology and operations.

Vic Shao is Founder and CEO of AMPLY Power Inc.