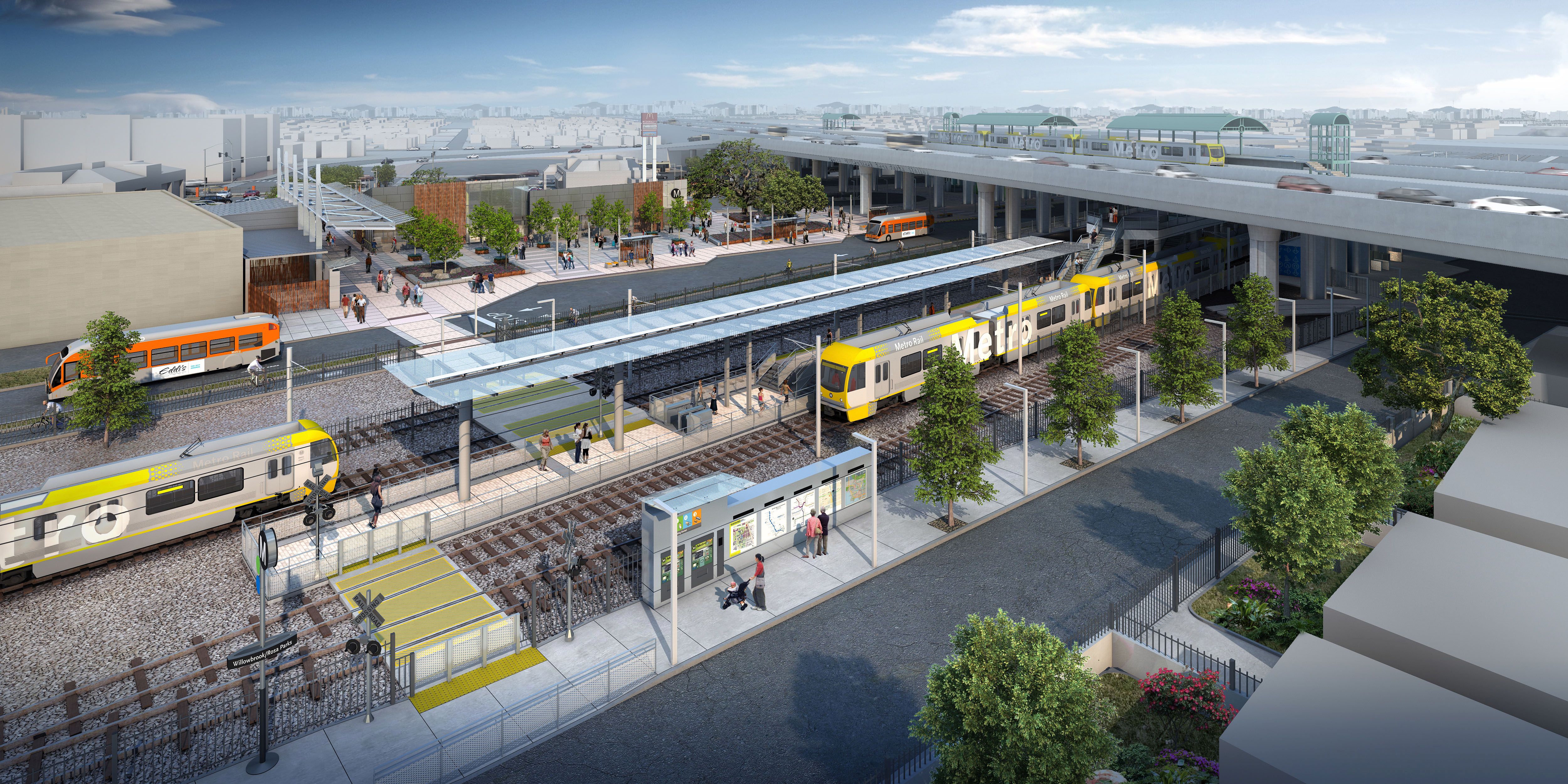 Traditional approaches to station safety and security typically include surveillance and communication tools, such as CCTV and eTel, as well as checklist-based site design, such as maintaining clear sightlines and appropriate light levels. While these tools are appropriate and effective, they may miss more subtle elements of user experience that affect the perception of station safety.

By paying attention to how it feels to arrive at, pass through, and use a transit facility, focused design strategies can complement traditional approaches by enhancing user perception of safety. While a station may be safe, according to statistics and incident reporting, ridership and patron satisfaction will still suffer if the station doesn’t feel safe.

Borrowed from the tech world, the term “user experience,” or UX, describes the ease and efficiency of using a particular element, whether it’s a web application or a transit facility. Excellent UX is one that not only meets the needs of the user, but also creates a pleasant experience in the process. There are a number of reasons the ideal UX might be missing in the transit context:

Applying UX in a Transit Context

The Los Angeles County Metropolitan Transportation Authority (Metro) is applying a UX-based approach to a major renovation and expansion of one of the county’s busiest light rail stations, the Willowbrook/Rosa Parks (WRP) Station.

Approximately eight miles south of downtown Los Angeles, WRP is one of the original 17 stations on Metro’s oldest light rail line built in 1990, and is the key transfer point between Metro’s Blue and Green Lines. Last fall, L.A. County residents approved a $130 billion plan and sales tax measure to expand Metro’s system, an historic undertaking which will be intensified in coming years by the city’s commitment to host the 2028 Summer Olympics. As a result, the station — currently the fourth busiest in Metro’s system — will only become more important over time as ridership throughout this rapidly expanding rail network increases.

Today, however, the station suffers from a number of significant issues, including poor visibility from adjacent roadways, limited sightlines within the station, gaps in circulation, congestion of platform and vertical circulation, and a challenging patron environment. The station, while well-maintained, is facing functional obsolescence and reflects a different era of design. In 2015, Metro brought on RNL (now part of Stantec) to see how this critical transfer point could provide a model for UX-based design as it builds out its system.

A first-time patron’s initial impression of WRP — regardless of how he or she arrives — is likely to be one of confusion. Circulation is not intuitive, signage is inconsistent, and the mezzanine connecting the grade-separated platforms is cramped. From a safety and security standpoint, confusion promotes a feeling of vulnerability, which can have a negative impact on ridership.

As part of the station improvement design, the Stantec team is updating the signage system, implementing implicit wayfinding cues, and removing on-platform obstructions.

The improved signage creates a specific hierarchy of sign types, sized and placed for different modes of travel, so that messaging for pedestrians, bicyclists and drivers responds specifically to the expected routes, decision points, and speed of each mode. Signage will be consistent across the entire line, making it easier for regular patrons to quickly locate the information they need. 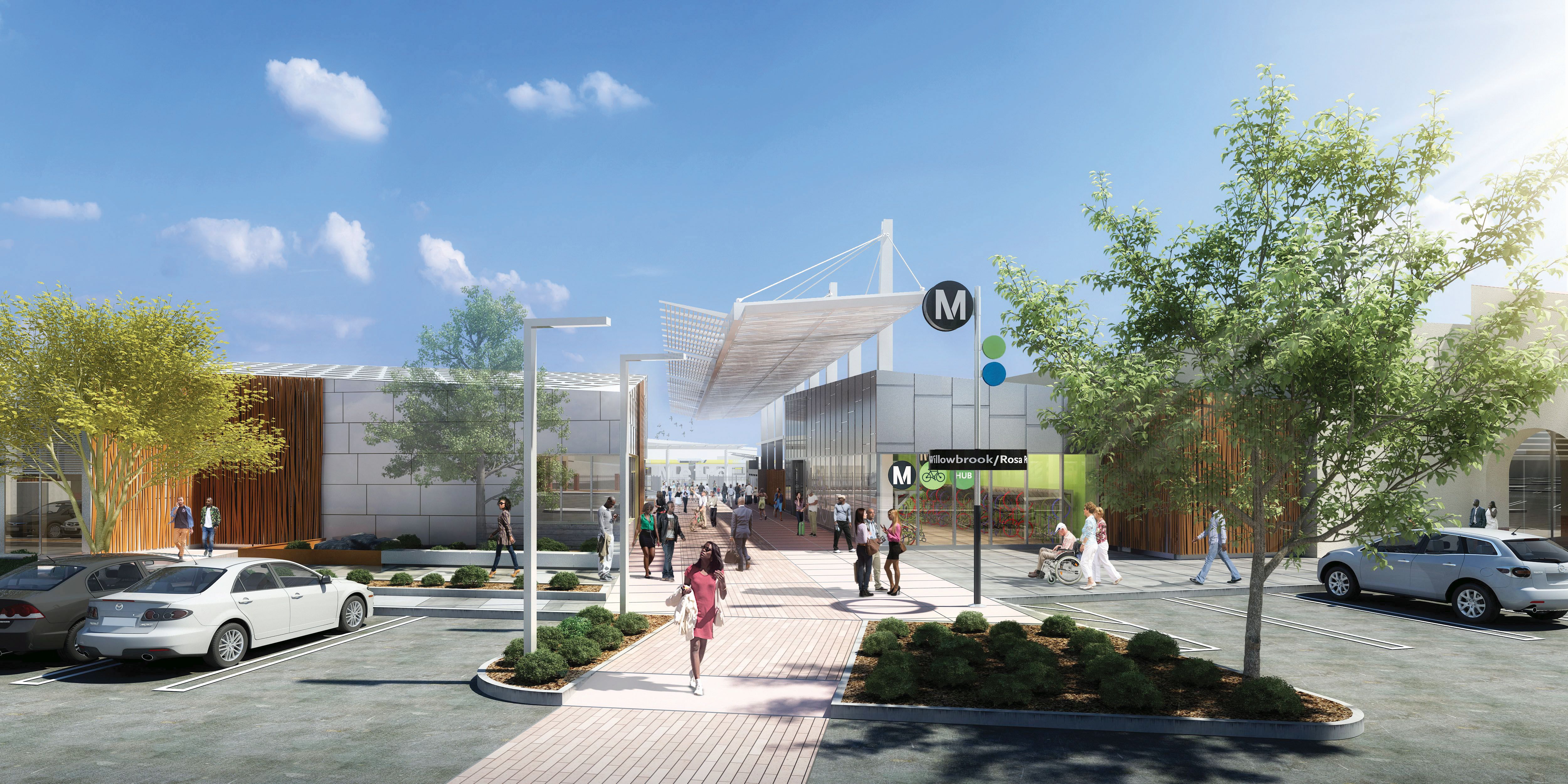 This revamped signage will be supported by design cues, such as a line of vertical lighting elements leading the eye along the most direct route to the platform. Paving pattern and scoring will serve a similar function, defining primary circulation paths and differentiating them from the plaza and gathering spaces. Finally, relocating existing artwork off of the LRT platform and into station plaza will open sight lines and ease platform crowding.

The majority of the WRP station sits under an eight-lane elevated highway resulting in lighting and visibility challenges as an irregular grid of three-foot cement columns block sightlines. The station does have all the traditional security features, including CCTV and police patrols, but perception is paramount: if it feels unsafe, many patrons may not want to use it.

Lighting: During the process of station redesign, Stantec’s design team also looked at lighting. Where existing light levels were adequate, the focus has been placed on function with less attention to feel.

Existing station access challenges both pedestrians and bicyclists, with significant sidewalk gaps, a lack of safe roadway crossings, heavy vehicle traffic, and no defined bicycle route. The main station entry has no sidewalk, and patron drop-off takes place in the drive aisles of the parking lot.

Modifications to station access first addressed pedestrian gaps, introducing sidewalk on both sides of the main station entry and closing other sidewalk gaps within the station. The redesign also acquired an easement through the adjacent shopping center parking lot to create a new direct pedestrian path from roadway to station to platform. The parking lot was redesigned to provide a defined pedestrian pathway, and a new patron drop-off area was created adjacent to the new public plaza. The station will also provide a dedicated bicycle lane linking into the city’s greater bicycle network. 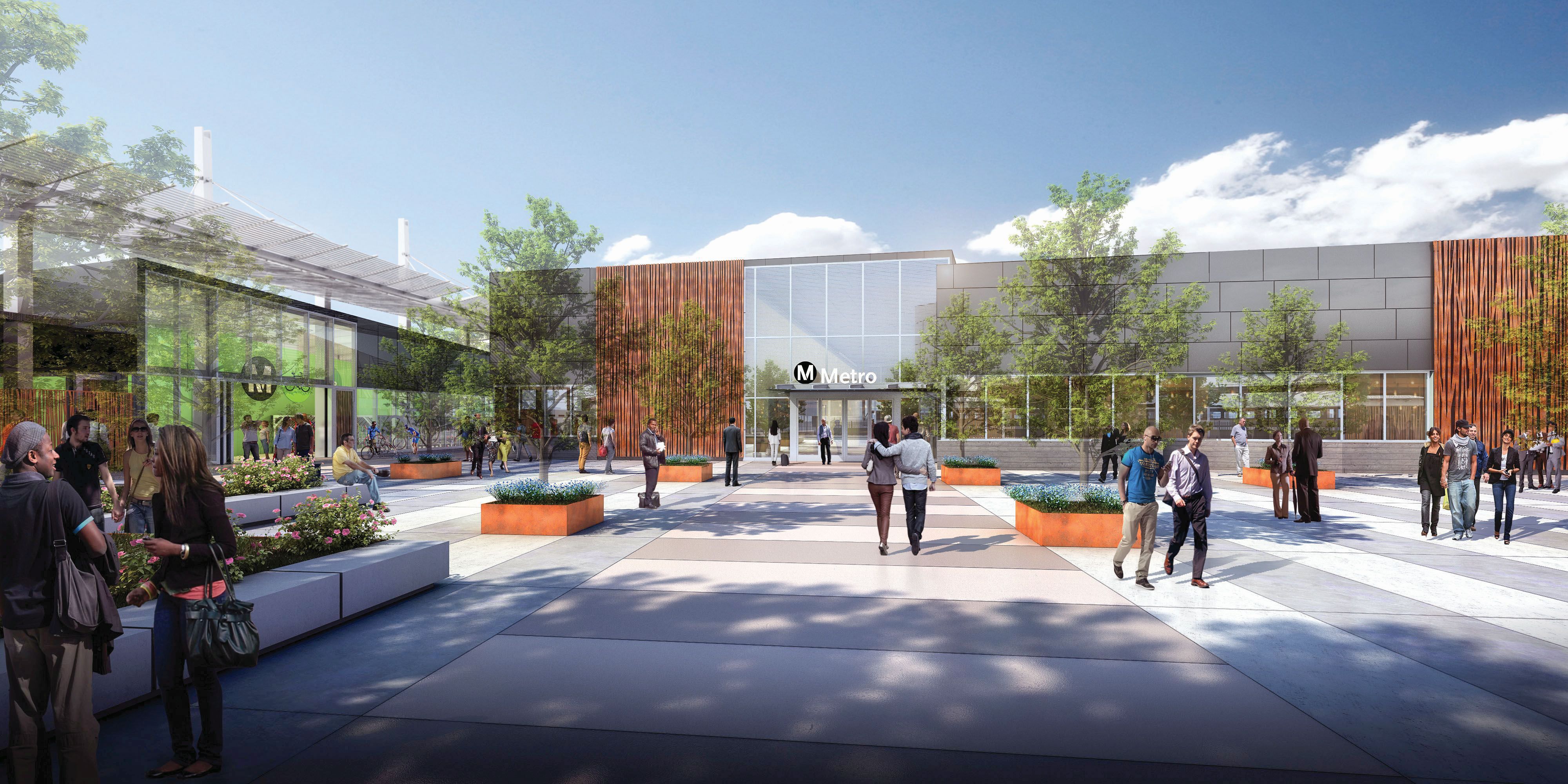 User circulation: A critical element of the new pedestrian and bicycle facilities is the establishment of a new circulation hierarchy that prioritizes the most vulnerable users: pedestrians first, then bicyclists, and lastly motorists.

Right now, almost 90% of WRP patrons transfer between the green and blue lines via a mezzanine sandwiched between the at-grade Blue Line platform and the Green Line platform, which is situated in the median of the freeway above. Combined with the preceding three UX issues, the larger station area is currently a place in which people spend as little time as possible, and correspondingly, in which there are few people.

Everything from ridership to public safety to economic and community vitality is impacted by how a space makes a person feel.

Increasing station activity is all about programming: people need a good reason to be there.

The redesign of WRP also seeks to integrate the station into the community by providing critical connectivity between the east and west halves of the neighborhood. At present, community members and transit patrons must take a long, indirect route to access the adjacent shopping center. The relocated track crossing is intentionally aligned to allow easy access to this neighborhood hub, and is specifically excluded from the fare-paid zone for this reason.

Ultimately, the most user-friendly transit station design comes back to designing for people. Everything from ridership to public safety to economic and community vitality is impacted by how a space makes a person feel. When transit agencies and design teams take the time to consider more than just the logistics of moving people from point to point, but also the experience they are facilitating during that process, the rewards will be reaped by the community for years to come.