Close
America’s intercity bus industry is currently changing course, pivoting away from the frenetic years between 2006 and 2013, when BoltBus, Greyhound Express, and megabus.com bullishly expanded service between the downtowns of major cities.

As we show in “New Directions: 2019 Outlook for the Intercity Bus Industry,” the latest installment of DePaul University’s annual series on motorcoach travel, new brands like Flixbus and OurBus are accelerating new trends. These services put greater emphasis on suburban stops away from downtowns, and they are rolling out niche routes in which schedules are limited to particular days of the week. Borrowing a page from the playbook of Allegiant Airlines and Sun Country Airlines, they adhere to the belief that their services can prosper without schedule dominance and seven-days-a-week operations.

Whether on rural routes or major corridors, dramatic day-to-day schedule adjustments have become the norm. In the Northeast, for example, OurBus has added routes in which service is available only on days where demand is strongest, and it regularly changes its schedule in response to real-time data. Flixbus, the Germany-based tech platform that attracted media headlines when it entered the U.S. market last spring, is doing the same in the Southwest. Such strategy is a dramatic change from days when carriers printed schedules in the Russell’s Motorcoach Guide and were remiss to change them.

A Push for Premium
Perhaps the most underappreciated development of late is the push by bus lines to add a touch of luxury to their services to attract passengers from airplanes and trains, particularly Amtrak’s Acela service. Since the start of 2018, the number of distinct brands offering first- or business-class service has grown to 17, with BestBus Prime, Catskill Carriage, LINE by Trailways of New York, and Washington Deluxe’s Lux Bus, all of which link various destinations in the Northeast to New York, making their first runs last year. Among the largest of these is Vonlane, which operates intrastate routes in Texas and features an onboard attendant and tables available for business meetings. The Dallas-based carrier, using 22-seat buses, added service last year between Fort Worth and Houston, complementing its existing Texas Triangle service. Currently, Vonlane is widely seen as an industry’s leader in premium bus service.

In New England, Concord Coach stands out, having added a trip to its popular “Plus” brand between Concord and Nashua, New Hampshire and New York. Featuring a two-by-one seating layout (one seat and two seats on opposite sides of the aisle, rather than the two-by-two seating on conventional bus services), and providing onboard snacks and drinks, this business-class has developed a loyal clientele. Concord’s new roundtrip runs Fridays and Sundays, departing from New Hampshire in late morning and returning in the evening, increasing the carrier’s Manhattan service to four trips each way on Fridays and Sundays, roughly half of which operate to Portland, Maine.

Like Concord, most of the premium carriers utilize two-by-one seating and offer snack or food service. Seven have on-board attendants. Long-time observers of motorcoach travel may see similarities with the Trailways’ Golden Eagle service of the 1960s, which too featured motorcoaches with small galleys and hostess service. But, many of today’s operators have also added frequent traveler programs and digital entertainment systems to the mix. To illustrate how rapidly today’s premium operators have expanded, we created an interactive map of these carriers, which shows how their amenities differ.

Another area of rapid innovation in bus service is the growing sophistication of state governments in creating and expanding branded intercity bus systems, with Colorado’s Bustang network and the Virginia Breeze being among the best-known examples. Several new Bustang routes added last year have helped to create a more interconnected network that reaches many parts of Colorado, while a second Virginia Breeze line was added on Fridays between Blacksburg to Washington, D.C., which returns on Sunday afternoon. Greyhound has also emerged as a national leader in this area, having recently leveraged its collaborations with state government to add new routes in Alabama, Kansas, and Illinois. “With little new funding for Amtrak, these services have become a focal point for state transportation departments,” added Matthew Jacques, a co-author of the DePaul study.

Rural service is also benefitting from increased experimentation. Greyhound, for example, dropped its Reno to Salt Lake City route last year after forging an interline agreement with Amtrak allowing its customers to make transfers to the California Zephyr, the Amtrak train that follows a nearly parallel route. (see Figure 1)

Many of the new subsidized routes receive support from the Federal Transit Administration’s 5311 program, which offers subsidies for service to places with populations under 50,000. State governments have rolled out new services on more than a dozen routes with these funds and other public dollars in recent years. A variety of technical tools, including creative arrangements for states to provide “in kind” (rather than monetary) matching funds, are also facilitating expansion. 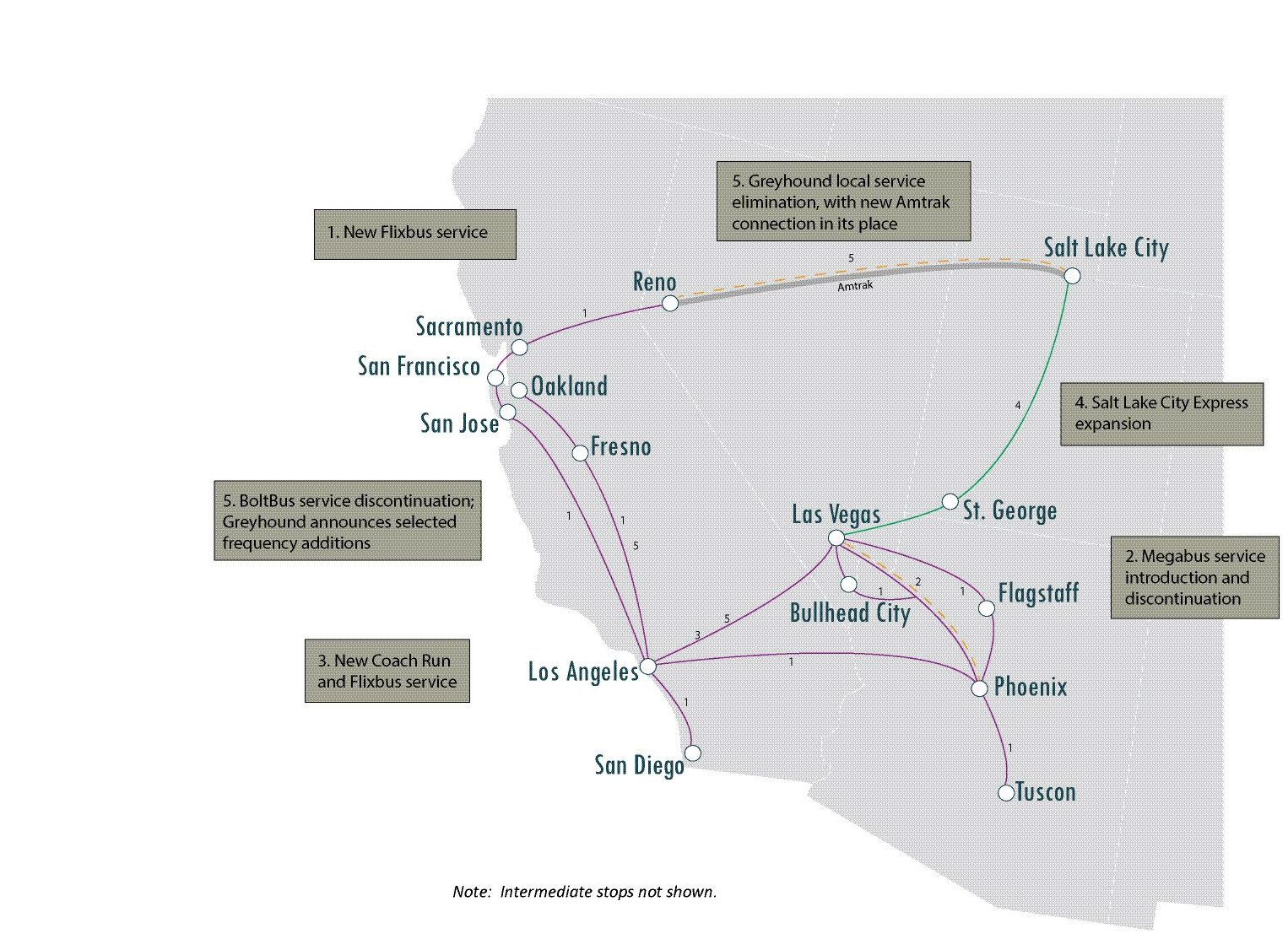 Flixbus Debut’s in the West
The long-awaited introduction of Flixbus to the U.S. came last May. This carrier’s growth across the Atlantic, achieved in part by acquiring existing services, such as the Deutsche Bahn bus subsidiary in Germany, has catapulted it to continental Europe’s largest operator within less than five years of its launch. This ensured that much publicity would surround its U.S. arrival.

Flixbus has a distinctive business model: the company partners with established bus companies instead of owning and operating buses, allowing it to focus on service planning, business development, and customer care. Although this asset-light approach is not unique in the U.S. (numerous brands, primarily in the east, use a similar model), Flixbus’ technology platform sets it apart. With a sophisticated website, global brand awareness distribution capabilities, and advertising savvy, Flixbus assumes responsibility for marketing, pricing, and ticket sales, while leaving operators to do what many are best-suited to do: manage their bus operations.

Flixbus’ launch in May centered on four routes: Los Angeles-Las Vegas, Los Angeles-Phoenix, Los Angeles-San Diego, and Tucson-Phoenix–Las Vegas. As shown on Figure 1, it later expanded to Reno, Sacramento, and elsewhere. Although it has not released ridership statistics, the new entrant reported to Bloomberg that its rollout has been successful, with load factors averaging 60% to 75% on its core routes. To date, the carrier has mostly single-deck buses, with double-deckers used in some circumstances, such as its overnight Los Angeles–San Francisco service.

RELATED: How to Make an Effective Motorcoach Marketing Program

Also in the West, Greyhound stepped up its California and Nevada service in response to the elimination of service by its subsidiary, BoltBus. Salt Lake City Express has enjoyed rapid growth between its Utah hub and St. George and Las Vegas since purchasing both Aztec Shuttle and St. George Express in 2016. This carrier, having routes extending from Montana to Nevada, reported to the Chaddick Institute that its system-wide traffic rose from about 285,000 passengers in 2017 to well over 300,000 last year.

To further enhance the customer experience, motorcoach operators are stepping up the amenities they are offering.

At Omaha, Nebraska’s Arrow Stage Lines, for instance the company has implemented Wi-Fi on about 95% of its coaches.

“When our customers get on the bus, it’s almost like they expect us to offer Wi-Fi now,” says Alex Busskohl, corporate operations and marketing specialist at Arrow.
To offset the cost associated with implementing Wi-Fi, Busskohl says it charges a technology fee upfront. He adds that one drawback of the service, though, is that its more ideal for checking email and surfing the web, versus allowing up to 54 passengers to jump on their phones and stream content from sites like YouTube and Netflix.

In an attempt to offer customers the capability to actually stream movies and other content, Arrow has been experimenting with on-demand passenger entertainment systems.

“Within five years, I assume that we’re going to be ordering motorcoaches without screens, so I see these systems as a great option,” Busskohl says.

Adam Hall, motorcoach sales executive at REI, which offers an onboard entertainment system, agrees that these systems will become a trend in the industry.

“Most everyone already uses their smartphones and tablets for some aspects of entertainment and we’ve become accustomed to the immediate gratification that they offer,” he says. “On-demand entertainment for motorcoach passengers is the logical next step, especially for passengers on longer trips. They want the flexibility to be able to choose from a variety of options and watch them whenever they want.”

Low Fuel Prices Squeeze Margins
■  Major carriers continue to achieve positive financial results, but due to the intensity of competition, profit margins remain thin. FirstGroup reported a moderate reduction in earnings for Greyhound during the 2018 Fiscal Year, which ended in March 2018, with a revenue growth of 1.7%. For the six months that followed, ending in September, performance inched downward: North American revenues as a whole dropped 1.6%, although Greyhound Express’ “like for like” revenues rose by 2.7%. The company reports: “Short haul journeys continue to outperform long haul, where there is more intense competition from the ultra-low cost airlines.” Greyhound’s revenues were also affected by its complete withdrawal from the western provinces of Canada, easily the biggest bus-travel story last year in this neighboring country.

Stagecoach, owner of Megabus and Coach USA, reported a 3.2% drop in its North American revenues, which included its charter and school bus service, for the six months between April and October 2018. This included a 1.7% drop in “like for like” revenue for Megabus, and revenues for other scheduled service on the continent dropped by an equal amount. Some of the revenue decline was likely attributable to competition from new bus lines, particularly in the Northeast and Southwest. Although rising support from government authorities offset part of the decline, the results point to the difficulties posed by lower fuel prices for major bus lines.

The report’s prognostications for the rest of this year include:

These developments and others, including more extensive use of crowdsourcing (a data-oriented technique that involves making rapid adjustments due to the “wisdom of the crowd”) will make the remainder of this decade a fast-paced time for providers of scheduled intercity service. The Chaddick Institute invites readers to join the Institute’s intercity bus listserv, which consists of four to five emails annually.

Joseph Schwieterman and Brian Antolin are the authors of DePaul University’s New Directions: 2019 Outlook for the Intercity Bus Industry report.