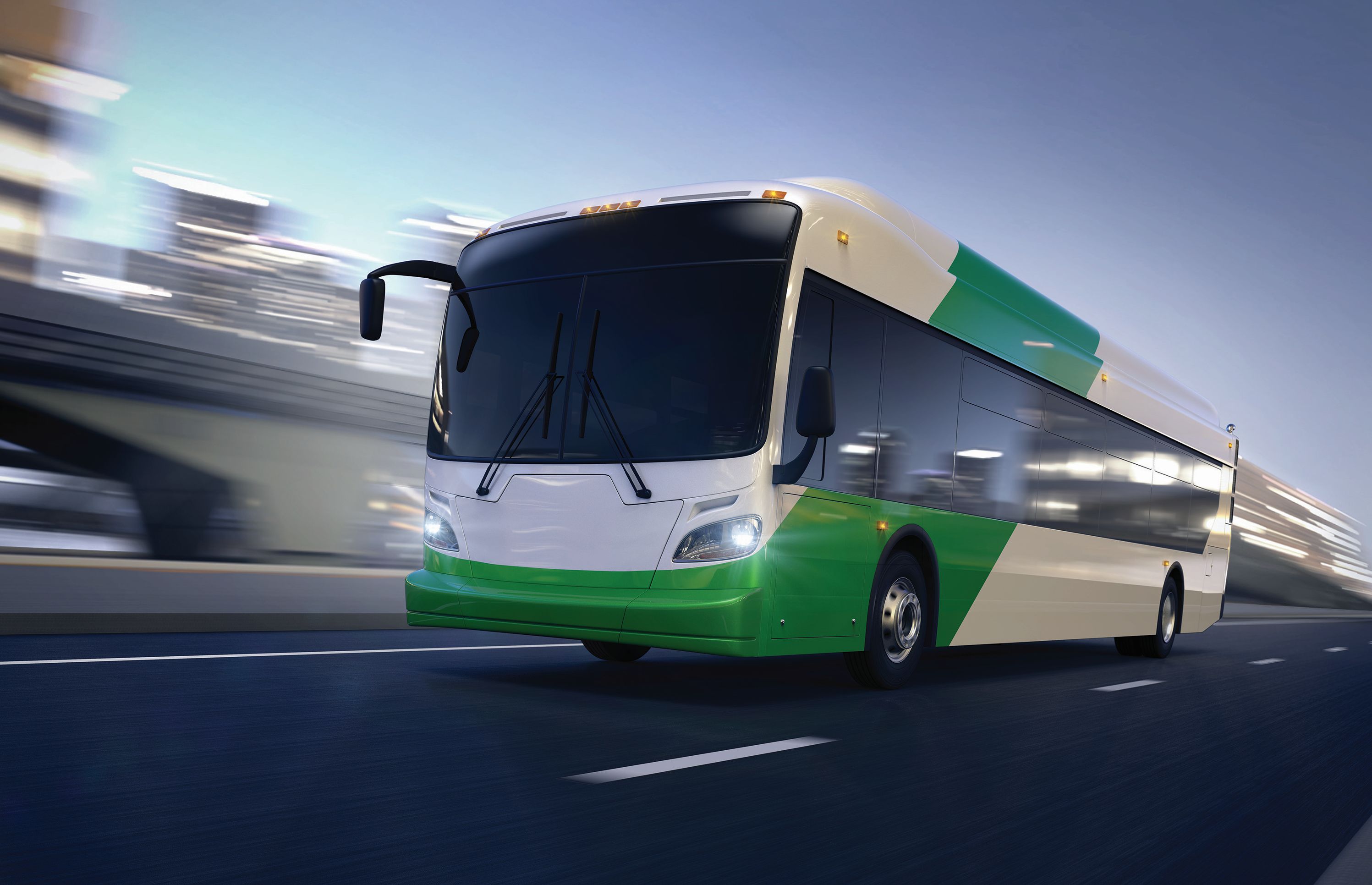 Obviously, it is in an authority’s interest to ensure a vehicle is operational for the 12-year period and qualifies for replacement funding. (PPG Commercial Coatings)

The buses, motorcoaches, and vans that traverse our roadways every day routinely face harsh conditions — highway debris, dirt and dust, chemicals, and salts — that can compromise performance and shorten their lifespan. Since transit fleets represent a significant financial investment, smart fleet managers continually look for ways to maximize the productive life and value of their vehicles.

When sheet metal is exposed, salt and chemical residues can accumulate on the body or undercarriage creating opportunities for corrosion to work its way in.

A preventive maintenance schedule is an obvious way to extend a vehicle’s life. While oil changes, tire and wheel inspections, and replacing worn or damaged parts help minimize problems, there’s something else to consider: corrosion. When everyday chips and scratches expose sheet metal and are not quickly repaired, salt and chemical residues can accumulate on the body or undercarriage creating opportunities for corrosion to work its way in. This corrosion could jeopardize vehicle components, generate safety and reliability concerns, and ultimately shorten a vehicle’s useful working life. This is particularly important since transit authorities are eligible to receive federal funds to replace buses that have been in service for 12 years. Obviously, it is in an authority’s interest to ensure a vehicle is operational for the 12-year period and qualifies for replacement funding.

Corrosion may be referred to as galvanic corrosion or rust, for iron or iron alloy materials. Under any name, corrosion has always been an economic concern. In the U.S. alone, every year, more than $276 billion is spent repairing corrosion damage. Of that amount, approximately $50 billion is spent by the public and private segments of the transportation industry on vehicle repair/replacement and support infrastructure. Fighting corrosion effectively can be a major source of savings for transit authorities.

The best way to prevent corrosion is to stop it before it starts. Once corrosion sets in, it can be deceptively slow to develop and suddenly it’s there. It can begin in a hidden spot — a wheel well, window frame, or door hinge. Indicators of corrosion include blistering paint, cracking, lifting, and surface roughening or peeling. At that point curative options are limited.

“Vehicle protection should begin at assembly,” says Scott Colvin, brand manager, commercial transport for PPG Commercial Coatings, a global supplier of paints and coatings. “You want to keep rust from forming by placing a protective barrier between the vehicle’s metal and corrosion-causing elements. There are ways to do that.”

In the U.S. alone, every year, more than $276 billion is spent repairing corrosion damage.

Every metal has corrosion potential, referred to as its anodic index. The farther apart two metals are in this rating, the stronger the rate of galvanic corrosion. The two different metals must be in direct contact with each other for the corrosion to transfer from one to the other. In the transportation industry dissimilar metals are most frequently joined on vehicle hinges, steps, doorframes, mounting brackets, and fasteners, which includes screws and bolts.

Add the presence of electrolytes and the potential for rust-corrosion increases. The most destructive electrolytes are road deicers. They are excellent conductors and accelerate corrosion because they attack vehicle bodies and undercarriages.

Most road salts are solids; as they liquefy they can be drawn upward with moisture into a vehicle’s undercarriage and body. Areas where chips, scratches, and collision damage can be found are more vulnerable to the elements and corrosion.

However, while modern vehicle manufacturing makes it difficult not to use different metals in vehicle assembly and electrolytes are all too common, corrosion conditions can still be effectively reduced:

Vehicle body and chassis builders are equally concerned about corrosion. To help address the issue, the leading paint companies offer a variety of premium quality paints and protective coatings that many builders apply to the vehicles they produce. Top quality paints provide the foundation for corrosion resistance, and a variety of advanced coatings can help. Colvin points out that many of today’s premium coatings are based on advanced aliphatic polyurea technology that provides a superior level of protection.

“Aliphatic polyurea is the Cadillac of polyurea coatings,” he adds. “It’s sprayed on and gives the body and chassis exceptional resistance to corrosive elements. There are several products on the market using this technology, including PPG’s version, Durabull® Extreme Duty Protective Coating.”

Protection doesn’t stop with the body. Shielding the undercarriage is critical. In addition to the coating a vehicle may receive at assembly, a supplementary heavy-duty, water-based layer, such as PPG's Corashield® anti-chip coating can be effective. These coatings can be sprayed, rolled or brushed under wheel wells and in adjacent areas at assembly or after a bus has been in service. The coating guards against the constant threat of damage from road debris.

Every metal has corrosion potential, referred to as its anodic index. The farther apart two metals are in this rating, the stronger the rate of galvanic corrosion.

When protected from rust, bolts, and fasteners aren’t compromised and can function properly. A corrosion-resistant material such as ECK® compound, from Van Nay LLC, can also create an effective obstacle to rust. It’s intended for use in a broad range of manufacturing applications in which dissimilar metals may come in contact with each other. ECK prevents all types of corrosion, including rust resulting from magnesium chloride and calcium chloride residue on roadways. Compounds such as ECK are generally safe for painted and unpainted surfaces, can withstand temperatures to 1,000 Fahrenheit and are suitable with rubber and plastic. The coating replaces anti-seize, dielectric grease, and Mylar tape products. It contains no silicone and is petroleum-based, so it won’t dry or wash off.

Primers and topcoats are critical

Primers act as cost-effective barriers between substrate metals and electrolytes, providing resistance against rock chipping while promoting durability and appearance. The chemistry of the various primers affects their anticorrosion strength. When corrosion prevention is the highest priority, zinc-rich epoxies provide top protection as part of a three-coat system that includes epoxy or urethane primers and topcoats. Epoxy primers offer adhesion and corrosion properties that often make them the best option for the mid-coat application in a three-coat system.

Polyurethane primers are used in some applications for fast cure speed and smooth appearance. Selecting the best primer for a particular situation can be influenced by several factors — climate, humidity, rain, snow, and expected service life. There is usually a strong cost/performance tradeoff with primers, so coatings manufacturers recommend selecting by performance expectations.

Topcoats are generally associated with appearance characteristics — color, gloss, and vibrancy, but they play a critical role in vehicle protection by defending primers and undercoats from deterioration. Topcoats slow the effects of water and road salts, serving as the first line of corrosion defense.

He adds that an overlooked aspect of corrosion prevention is proper preparation of the substrate. While new primers and direct-to-metal topcoats are constantly being improved, they’re virtually worthless if the substrate is not correctly prepped.

There are no one-size-fits-all solutions

There’s no single fix for galvanic corrosion or rust prevention; however, a transit fleet manager now has effective ways to fight it. Anti-corrosion coatings should not be viewed as an expense; they’re an investment in a fleet’s productive life.

Most road salts are solids; as they liquefy they can be drawn upward with moisture into a vehicle’s undercarriage and body.

Colvin recommends a comprehensive anti-corrosion approach that covers nearly the entire vehicle with a variety of coatings.

“Individual buses and fleets have differing requirements,” Colvin notes. “The best way to determine what you need is to talk with your coating representative and ask for a coating audit including the corrosion portion.”

Anti-corrosion coatings should not be viewed as an expense; they’re an investment in a fleet’s productive life.

“Municipalities, regional transit authorities, and other entities linked to mass transportation are justified in protecting their investments,” said Colvin. “Millions of dollars are spent to provide safe transportation for the public. When a bus or van is sidelined, it affects the entire system. When it’s sidelined by corrosion, well, that’s inexcusable. Rust is preventable.”

The cost of corrosion protection varies. However, whatever the cost, the prevention is significantly less expensive than a replacement vehicle.

Eli Greenbaum is an automotive writer based in Michigan