Transit systems across the country are feeling financially squeezed, and many are passing the pain along to riders through fare hikes. New York’s Metropolitan Transit Authority, the nation’s largest system, has just raised the cost of its monthly passes, the second such increase for the city's straphangers in two years. The Metro in D.C. will raise rates on July 1, and some other systems across the country are considering following suit over the course of the year.

In the wake of the increase in New York, where a monthly unlimited pass now costs $121, Value Penguin analyzed the affordability of more than 70 transit systems across the U.S. Encompassing cities large, small and mid-sized, the analysis considered not only the cost of fares (calculation based on the least-expensive monthly pass) but how deeply that expense cut into the average income of the city’s transit commuters. 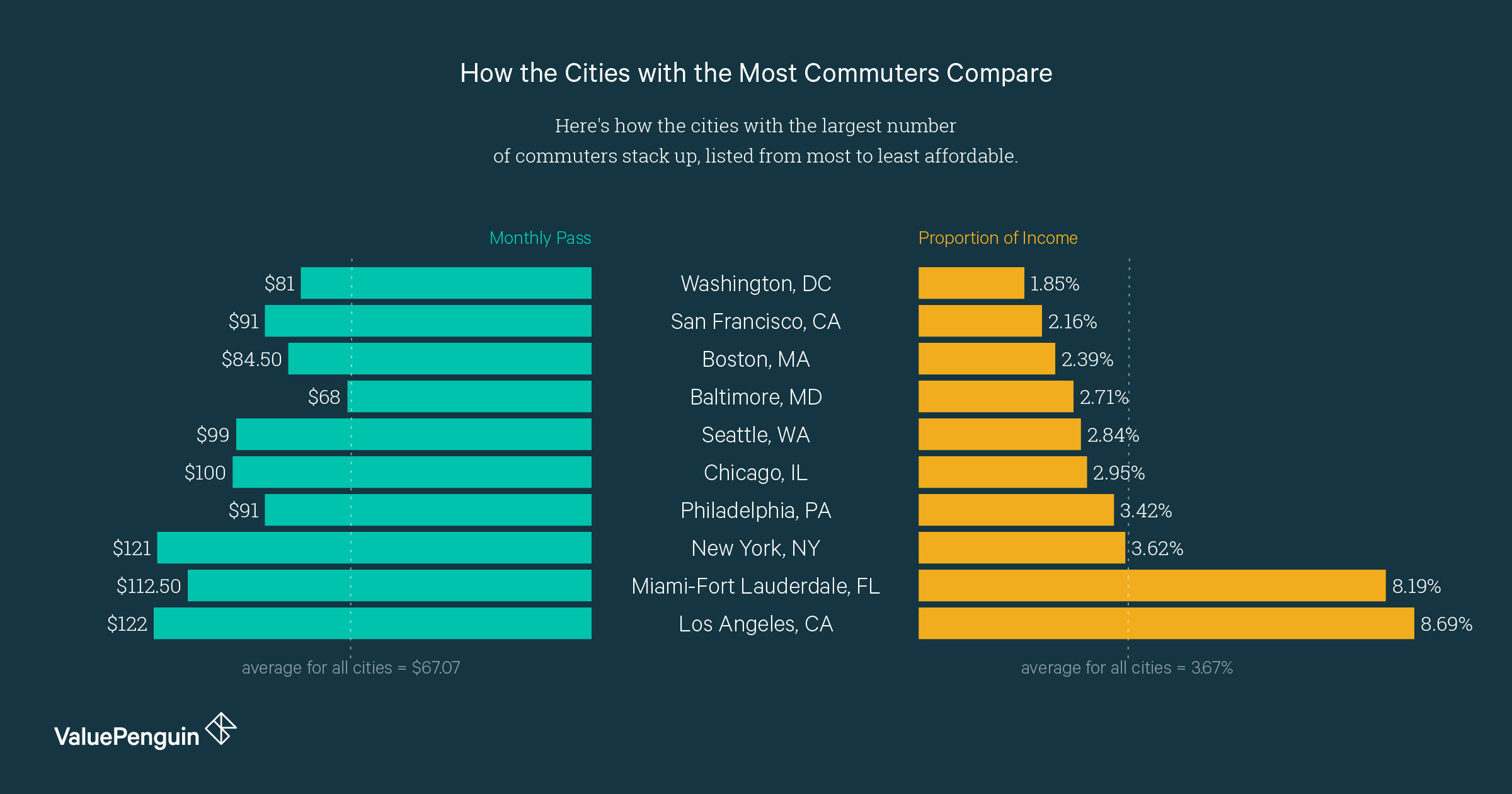 Both the cost of passes and incomes ranged widely from city to city, leading to big differences in how much of the average commuter’s paycheck goes towards taking the bus or train to work.

New Yorker Commuters Pay More and Make More
Despite this month’s hike in costs, New York isn’t the least affordable place to take the bus or train among the cities with the most transit commuters.

As the chart below reveals, it’s edged out for that dubious distinction by Los Angeles and Miami, where the least expensive monthly passes ($122 and $112.50, respectively) are well above the $67 average for all cities, and represent more than 8% of the average commuters’ income.

A pass in New York is similarly pricey, but the city’s straphangers have higher incomes than transit commuters in most cities. Consequently, that $121 MTA pass represents only 3.62% of their average monthly income--less than half the bite of buying a pass in Los Angeles and Miami and only a little above the national average of 3.2%. In affordability, then, New York ranks in the middle of the pack among all the cities we analyzed; see the full list at the bottom of the article.

Where Commuting Takes The Biggest Financial Bite
There’s no single factor driving why cities made our least-affordable list. As the graphs below (which are organized by city size) reveal, some cities are relatively unaffordable because commuters who make far less than New Yorkers are forced to pay New York-like prices. Examples include Cleveland, Portland, Atlanta, and Denver, where passes cost $100 or close to it. Other cities have below-average costs, but their commuters are notably poor; examples include El Paso, Springfield, Mass., and Dayton, Ohio. 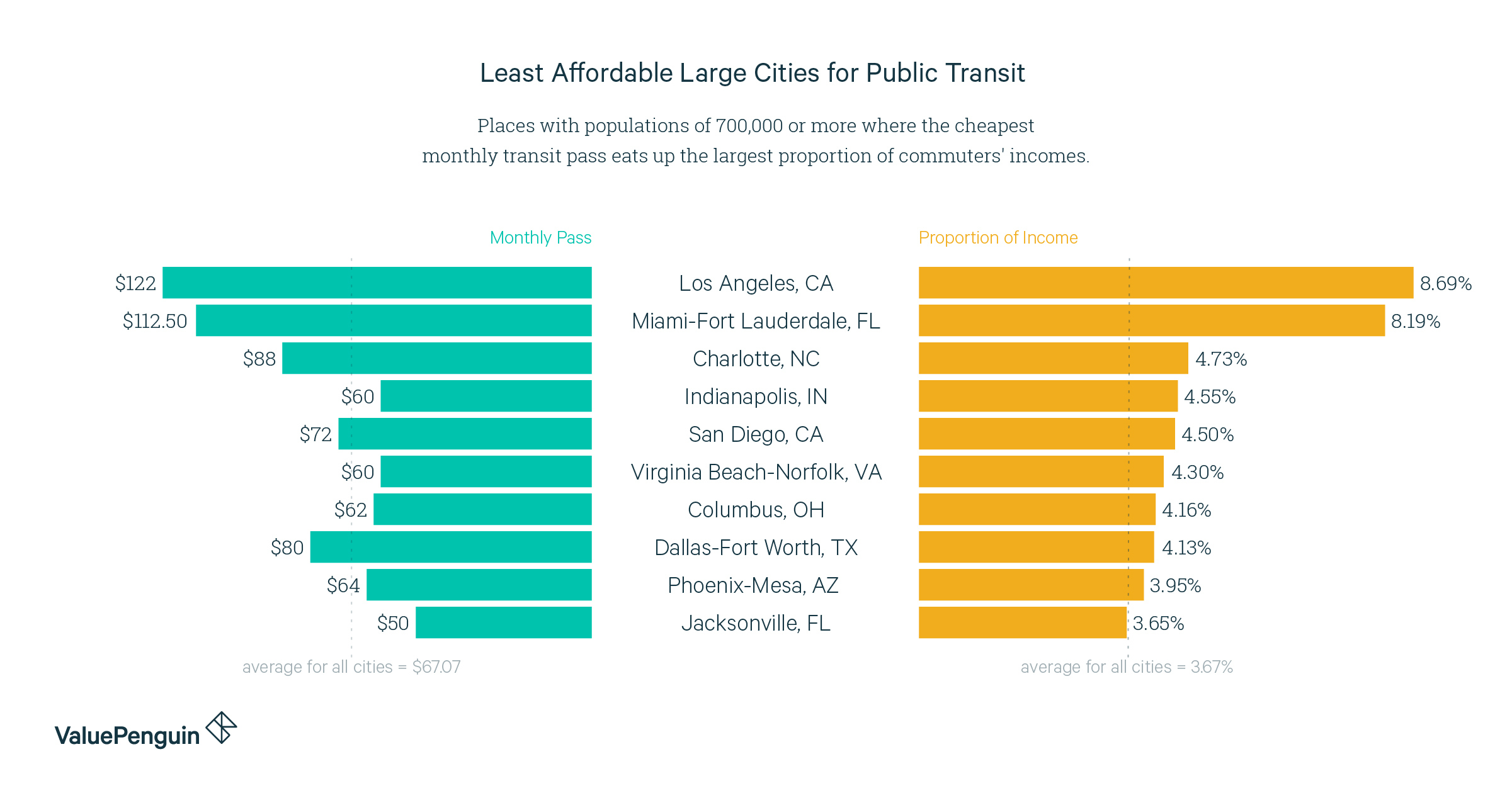 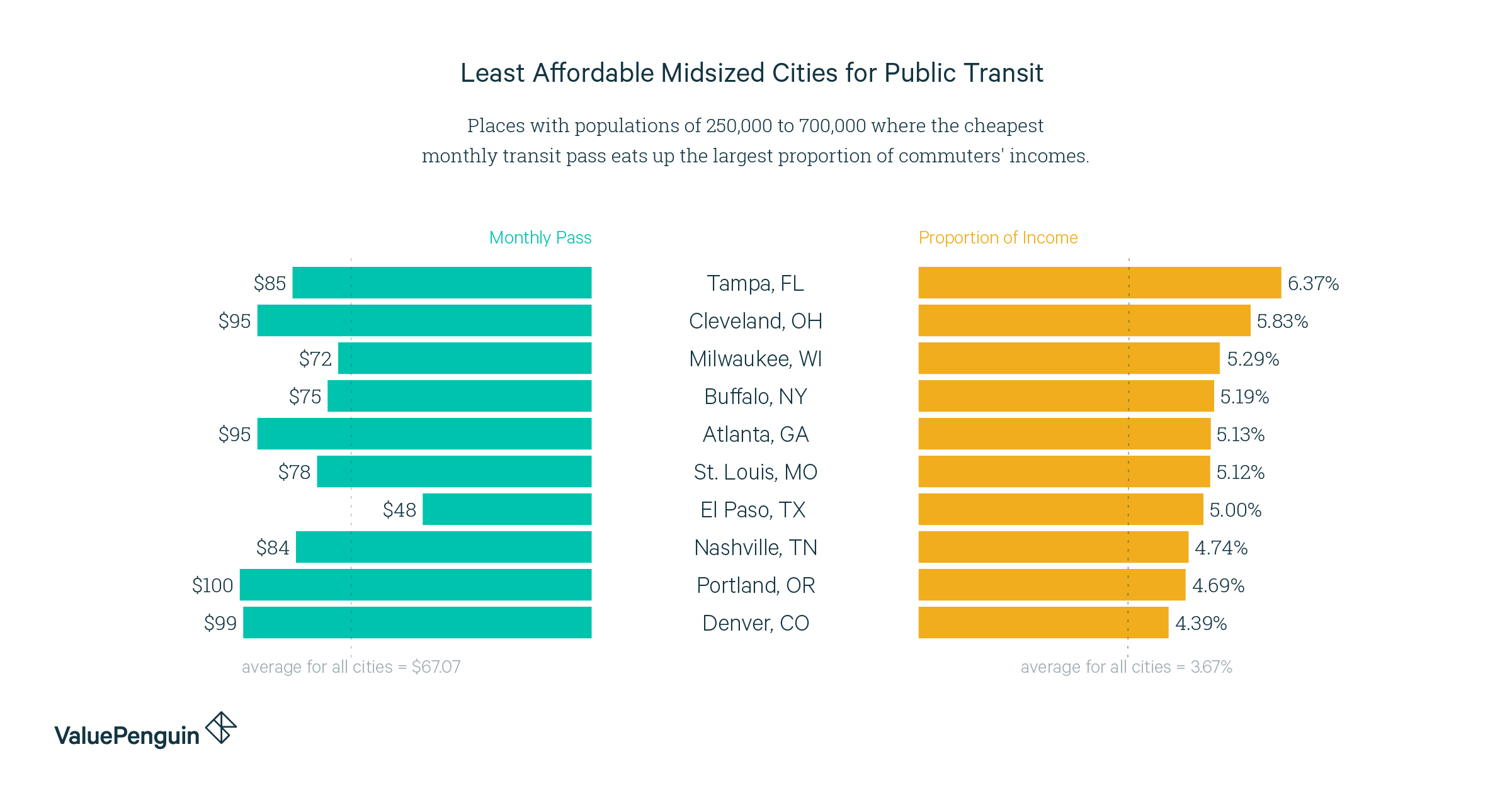 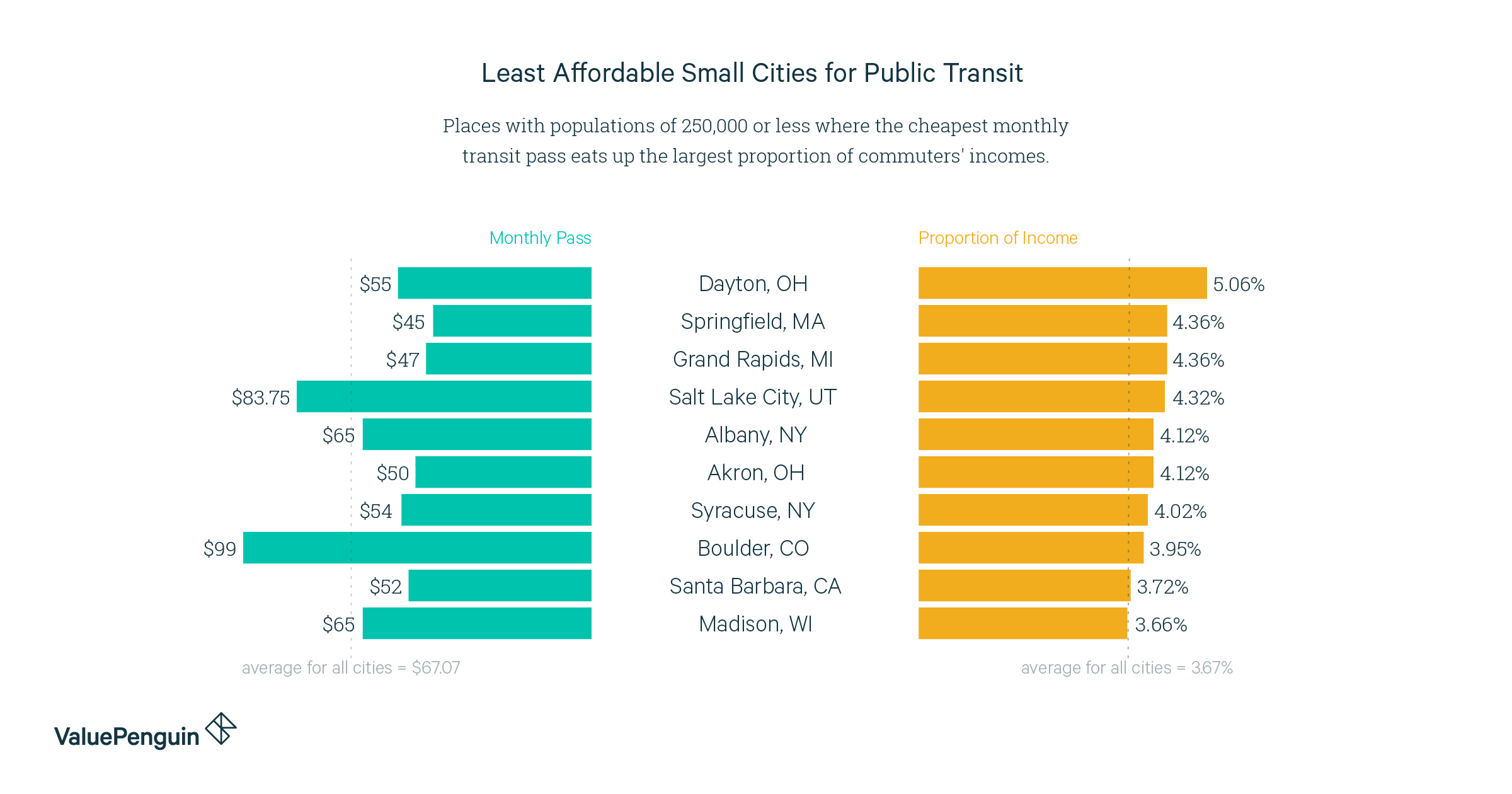 A note about classifications in the city-size graphs below. Cities are classified by the population living within city limits, which means a few centers where the city itself is notably small but is surrounded by a sprawling metropolitan area may appear to be in the wrong category. (For example, Salt Lake City has a city population of about 150,000, and a metro one of about 1 million.)

Where Taking The Bus Or Train Is Easiest On The Pocketbook
In the most affordable cities for commuters overall, riders ponied up between about 1% and 2% of their incomes. 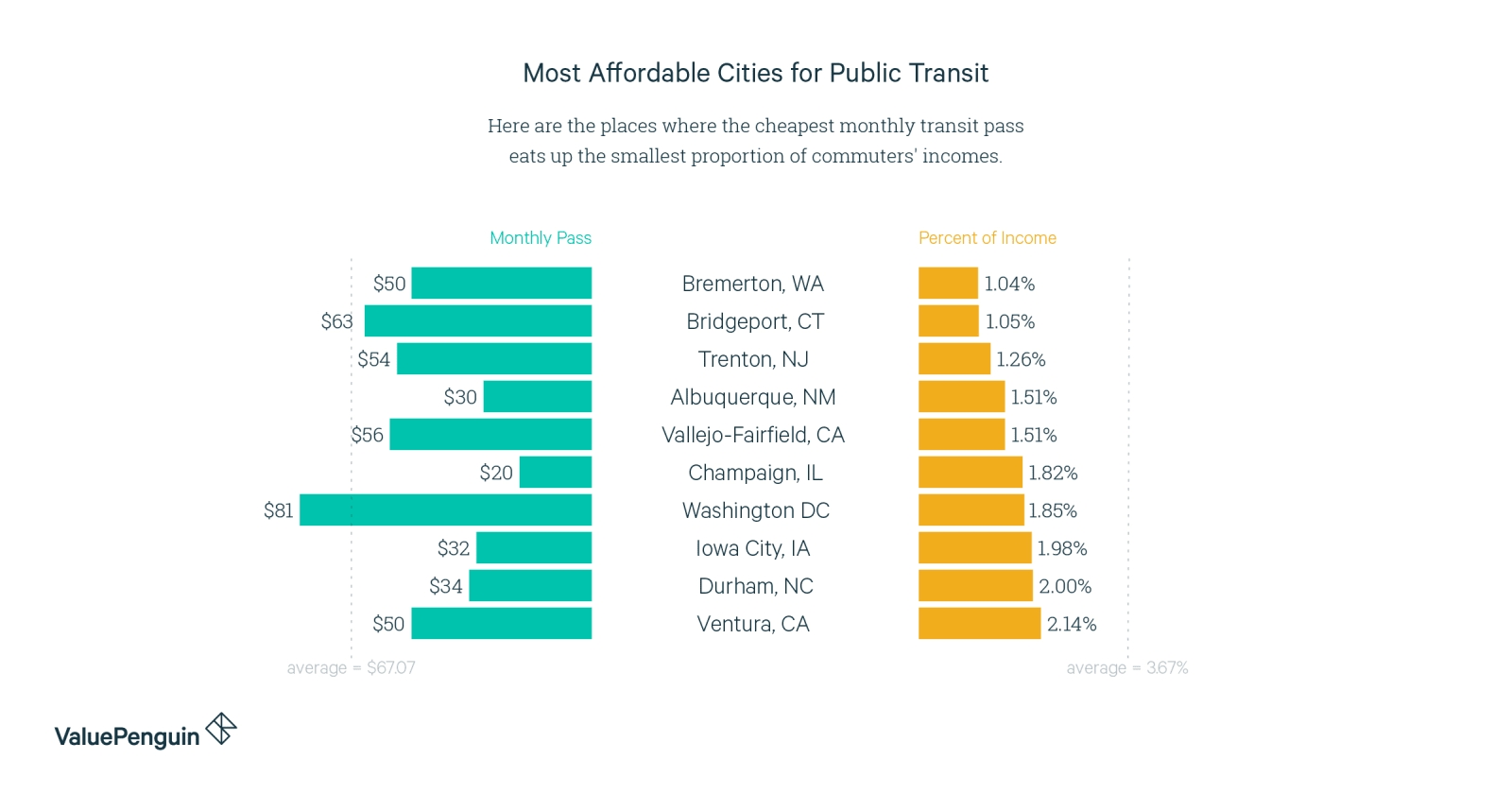 Only one big city made the list — Washington, D.C., which is another major center whose consumers are fairly affluent. The top three cities of all for affordability--Bremerton, Wash., Bridgeport, Conn., and Trenton, N.J. — were also fairly wealthy, but had relatively moderate costs for passes within the city.

Most of the others in the top 10 for affordability, including Albuquerque NM and Durham, N.C., were low to middling in affluence, but benefit from passes that cost less than half the national average — generally only $20 to $30 or so.